I have 2 different size monitors that I am using in dual monitor setup. While switching from the larger to the smaller, often times the mouse pointer is stuck at the bottom corner between the monitors.

Is there a setting somewhere that I can set so that this annoying issue doesn't happen?

Open system preferences, click 'displays', and then click the 'arrangement' tab. Here you will see a scaled down representation of your displays' positions relative to one another. Drag the displays around until the mouse switches over at the correct position. For your case, it'll probably look something like this: 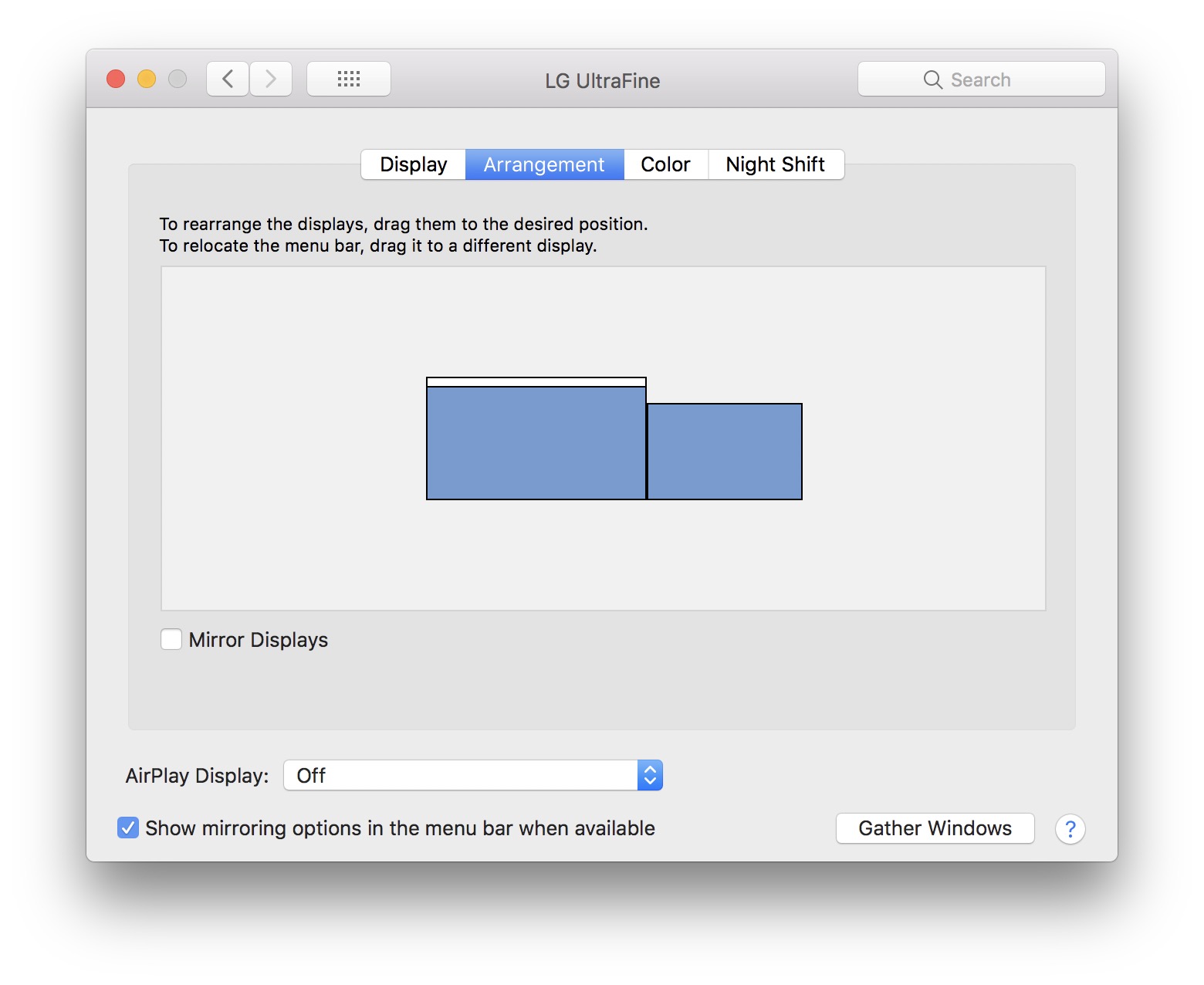 The mouse pointer stuck problem that you are experiencing is due to the way the monitors are aligned respective to each other.

Open System Preferences app → Displays → Arrangement and adjust the relative locations of the connected displays. Notice the layout of monitors as depicted.

The mouse pointer will only be able to switch between screens where the corners are aligned and there's a continuous path for the pointer to move. This pattern hold for whatever relative placement you choose for the two or more monitors. (For e.g., if one display is placed vertically above another, you'll not be able to move the mouse pointer to another display by moving it sideways, but towards top/bottom of screen).

Once the pattern is understood, you'll no longer face the mouse pointer stuck issue.

Sadly this is just the default behavior. In their defense, it's the same in Windows.

I've never been able to find a 3rd party app that handles this quite the way I want. It's easier to just have screens with the same resolution, quite honestly as well as sensible virtual display arrangement.

There are many applications that move your mouse to another screen via shortcut, but to me, that just doesn't cut it. It's too clunky.

As a side note: DisplayFusion (windows only) has the desired features implemented in the best possible way. It just slides to the other screen as if there was no corner there at all. It's fantastic. It has two settings:

I think the most useful application I have found to get around this issue is Mouse Warp 2. It warps your mouse to the center of the active window when you switch to it using Cmd+Tab. It also has the option to only warp the mouse cursor if the activated application is on a different screen.

I haven't used Mouse Warp in a while because it had a small issue, where if you Cmd+Tab too fast, I think if you release Cmd before the application switcher appears, it won't center the cursor.

Because of that, I've been using Keyboard Maestro

KBM is expensive enough that you probably won't be buying it just for this feature, but it does have a trial if you want to try it out.

I made a macro that kind of replicates Mouse Warp's behavior. It's a little janky and could be improved but it works very well (no matter how fast I Cmd+Tab).

Also, because this works by detecting that an application was activated, it is not limited to just Cmd+Tab, which may or may not be a good thing depending on what you like. That's why there is a conditional saying that if you click a window, don't center the mouse. If you open a new application, for instance, the cursor will be centered on it.

I also included a version of that macro called Active Window (disabled by default). It's included in the same package. It will trigger every time a window activates. Literally any window. This includes "open file" windows. And likely most regular Alert windows. I like the Active App better personally. 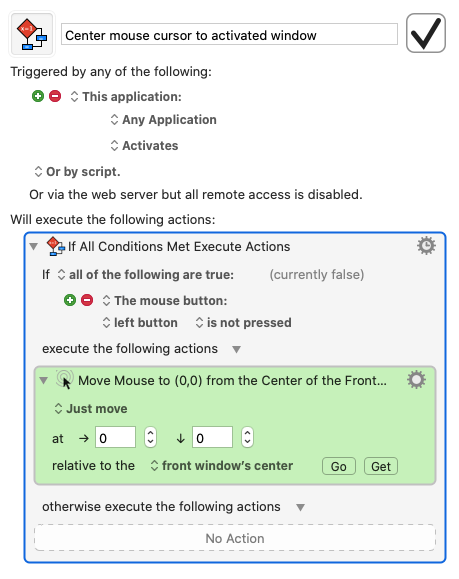 Not the answer you're looking for? Browse other questions tagged display macos mouse .

5
How to lock the mouse to one monitor in a multi-display setup. (On a Mac)
0
Why can't I resize a window's height to make it smaller when it is at full height?
12
How do I put the dock on the top (external) monitor in a dual monitor setup?
0
How to allow mouse pointer to move to smaller display?
14
Stop mouse pointer from sticking to the edge of display in dual monitor setup
0
Dual Monitor Setup with Mac Mini (2014) Screen Blinking