Will updating my iPad to iOS 5 cause me to lose media? (the answer is YES)

I need help with understanding what will happen with all the content if I'll agree to iPad's request (which I see every time I connect it to the computer) to update the iOS from 4.3.5 to 5.0.1. Every time I make an attempt to start that process, I interrupt it scared with all those warnings that all the apps and content will be removed. It suggests to synch, but when I'm starting the synch process — it looks like synch works only one way: from Mac to iPad, not the other way around. It frankly drives me crazy.

I do have Apps which I bought directly to the iPad; books which I uploaded as epub or pdf files from various locations on my hard drive into the iPad, avi or mkv videos converted to m4v and drag-and-dropped into iTunes, etc. Nothing is kept in the iTunes Library.

I don't understand what is the suggested procedure to upgrade the iPad software without losing all my apps and media files.

Could someone, please, explain what to do to make this upgrade the way it won't remove my files and apps?

Here are screenshots of warnings I see and don't get what should be done about it:

I clicked the Update button: 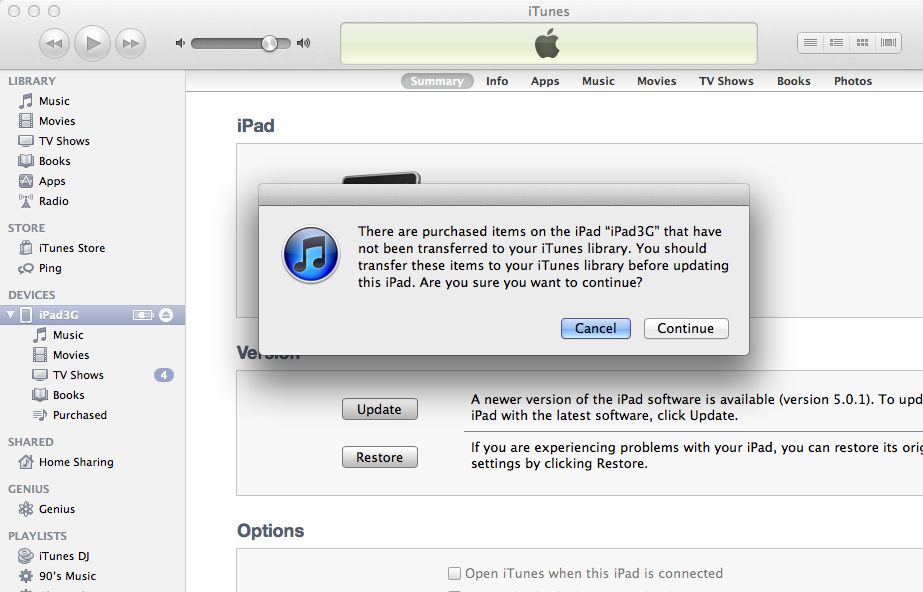 It says there are items that should be transfered to iTunes Library, but does not say how. Drag-and-drop in iTunes from iPad to the Library doesn't do a thing.

Next screen (assuming it'll offer me to do the transfer) is: 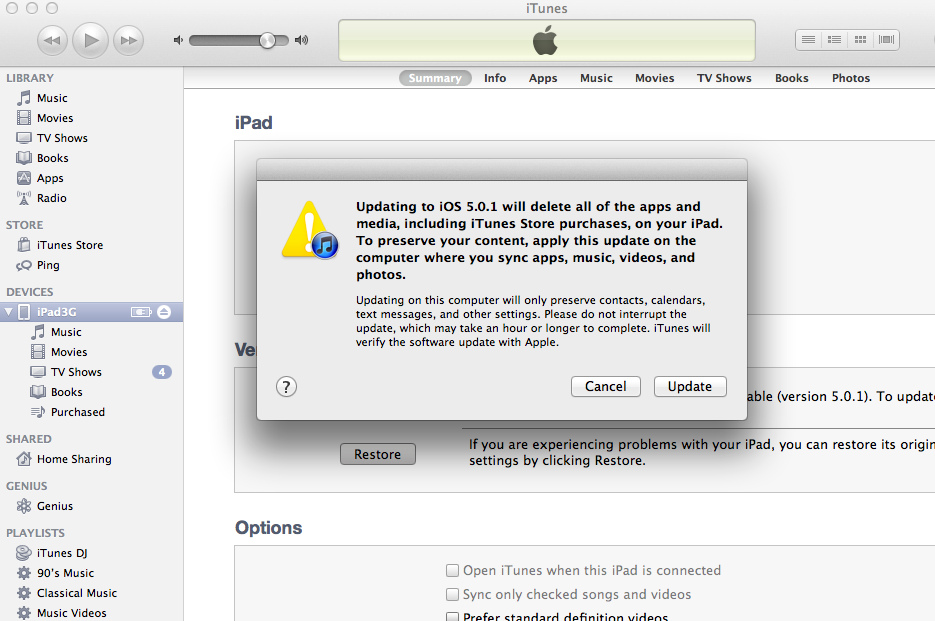 It says "Updating to iOs 5.0.1 will delete..." basically everything, and suggests to apply this update on the computer where I synch apps, etc. I am on my only computer now. I don't synch, because I don't understand what synch does, except the warnings that it will remove everything from the iPad. I don't want to "synch" empty Library with lots of content on the iPad by removing this content.

When I'm attempting to synch the apps, it shows: 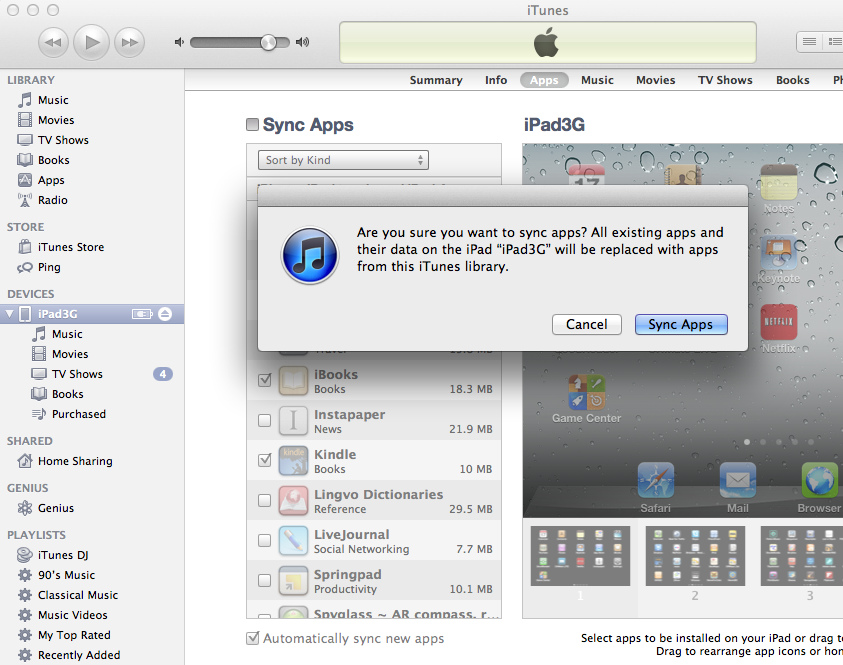 When I'm trying to synch books, it talks about removing "songs": 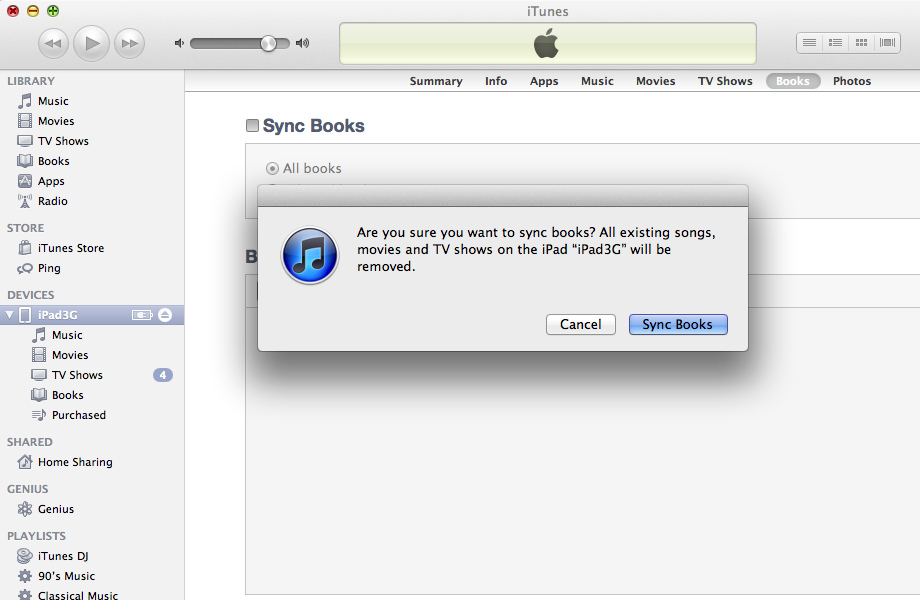 I found an application which was supposed to copy books from the iPad, but it turned to be so buggy, and copied not all the files, randomly skipping some.

So, the big question is: how can I back up my iPad completely, so I can restore everything after the iOS update?

iDevices are designed to be linked to an iTunes library where they get their content. If you've never trusted iTunes before and been manually copying items onto your iDevice then you're just making it hard on yourself.

Synchronizing your files and upgrading the iOS are separate steps. I would recommend you get the iPad linked to your iTunes library properly and synchronization figured out before trying to upgrade lest you lose your iPad content in the process.

First, make sure your iTunes and your iPad are registered to the same AppleID you used to download your apps and other iTunes store items. (This may already be the case if it's telling you about purchases, but check.)

For other items like your own music and video files, the synchronization is one-way. If they're not in your iTunes then they won't sync back from your iPad.

Try using manual mode for those items if you're happy leaving well enough alone with keeping those items on your iPad.

Otherwise, you'll have get these from your original source (ideally) or use a third-party utility to extract the files from the device. It's been a while since I've had to do that myself, but as I recall it was a bit messy since the files lost their original filenames when they were stored in the device's filesystem/database. At least I think you can get them out somehow, but yes, it might be buggy.

The key is to have everything in iTunes before allowing the iOS upgrade to remove anything from the iPad. In my own experience, everything was right back where it was after the iOS upgrade, even though I had some similar warnings, but if you don't already have the items in iTunes then it might be a different story.

Not the answer you're looking for? Browse other questions tagged macos ipad data-synchronization .

2
What happens with existing apps on device when synching with new computer?
0
iPad 2 not updating to iOS 5.1
1
iPad 1 stuck in DFU mode after 5.0.1 -> 5.1 OTA-update
1
Can iBooks be synced from an iPad to a new computer to save my documents?
1
How to syncing iPad with iTunes?
1
How to move from iTunes book library to iBooks app
0
Problem with updating apps in iPad 3 with iOS 7.1
2
Updating iOS always bricks my iPad
1
Which files are transferred when using Transfer purchases from?
0
How to fix iTunes downloading IOS update but not installing?