Why does spaces keep capturing keyboard input some times after switching spaces?

Sometimes the black visualization showing the available spaces and the space I'm currently on doesn't disappear when I have switched between two spaces. When this happens, spaces seems to steals keyboard input from the application(s) on the space I have switched to. Sometimes the visualization disappears after I keep switch spaces some more, but sometimes I have to force a reboot.

Does anybody else experience the same thing, and is there anything to be done about it?

I find that killing the Dock only sometimes makes the problem go away. Usually keyboard input returns, but if I switch spaces using the keyboard shortcuts, the visualisation sticks around & keyboard input is stolen again.

What I have found to work is putting the display to sleep. I've had the bottom right corner of the screen set to do that for ages, so it's quite convenient for me. I've never had this method fail; once the screen is awoken, the problem is gone & doesn't return when I switch spaces again.

To me this suggests that the problem isn't actually in Dock, it's in the system's EventTap subsystem, the bit that lets stuff like Spaces, Screen Sharing, LaunchBar, & Spotlight take keystrokes before the focussed application gets them. I've actually experienced a similar problem with Screen Sharing, where the system whose screen is being shared gets its keyboard input mangled if a modifier key is pressed on the viewing computer & not released until Screen Sharing has lost focus. It's sort of the reverse problem, but it indicates that perhaps the Spaces problem is the EventTap framework getting stuck in a similar way, never sending the message that Control isn't being held down any more.

I experience the same issue on a regular basis. Pressing CMD+W right after noticing that the spaces window will persist makes the window disappear most times.

If it doesn't, you can kill Dock from Activity Monitor (start it from the Applications folder in your Dock, select 'Dock' and click 'End Process' or the like). This always makes keyboard input work again, but the issue will reappear very soon.

If I could, I also would give bounty for this!

/Update: The Mac OS X 10.6.5 changelog suggests that this issue will be fixed in that version:

Addresses keyboard responsiveness issues in the Dock when Spaces is turned on.

I haven't figured out the why of it, per se, but I have figured out a good way to get around it; I created an Applescript application that lives in my dock that allows me to kill the Dock when this happens (since the keyboard is no longer responsive at that point).

Create this script in the AppleScript editor and save it as an application somewhere:

Add it to your Dock, and when Spaces grabs all keyboard input you can click it to restart the Dock, which will allow you to proceed.

This comment on the apple subreddit led me to this thread where people discuss this issue in relation to an application called Cinch. In the thread about this on the apple forums, people mention several other applications that might be causing this issue too.

What is causing this issue?

From what I can gather, this issue seems to be related to applications using Event Taps (an API that lets applications directly listen for keyboard and mouse events). I think there is either A) a bug in OS X where Event Taps sometimes stop working for whatever reason, or B) application programmers consistently have a hard time using Event Taps correctly.

What can I do about it?

If this is indeed caused by an OS X bug (this seems the most likely to me), this issue can't be fixed completely by end users. There is one thing you can do that might make it happen less frequently though: In the Cinch thread, there is a link to an application that lists all running applications that have Event Taps open. It looks like this: 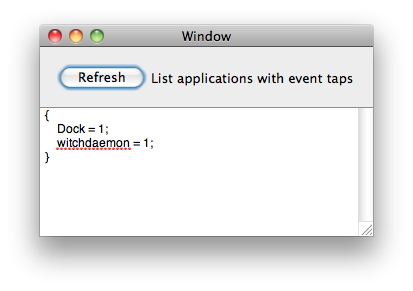 I figure that the more applications you are running that have an Event Tap open, the more often you'll end up with a clogged Event Tap somewhere, and you'll have the spaces issue happen more often as a consequence of this.

So, if you're having this issue, try running as few of the applications that show up in EventTaps.app as you can.

For whenever the issue does happen, kill the Dock using whatever method you find most convenient. I keep the AppleScript snippet that Chris R posted in his answer in an .app on my Desktop, and run it whenever spaces locks up.

Not the answer you're looking for? Browse other questions tagged macos snow-leopard spaces .

3
Issue with floating windows and Spaces
1
Why can't I move the mini iTunes player between Spaces?
3
Can Spaces be configured by project, rather than by application?
2
Japanese MacBook Stop Switching to Japanese Language
5
How to prevent dock auto-hiding setting from changing?
30
OSX keeps switching to the first space
3
Strange characters appearing in Terminal
0
Rosetta under Yosemite?
2
PyCharm seems to install but won't run