I have an early 2015 Macbook Pro running Mac OS Yosemite. Last year I replaced the Mac's internal 500GB SSD with a OWC Aura 1TB SSD. Everything has worked fine up to now, although the OS still recognizes the SSD as an "external" drive.

I am now trying to upgrade to High Sierra. The installer won't run on this drive, complaining that that it's missing a firmware partition. 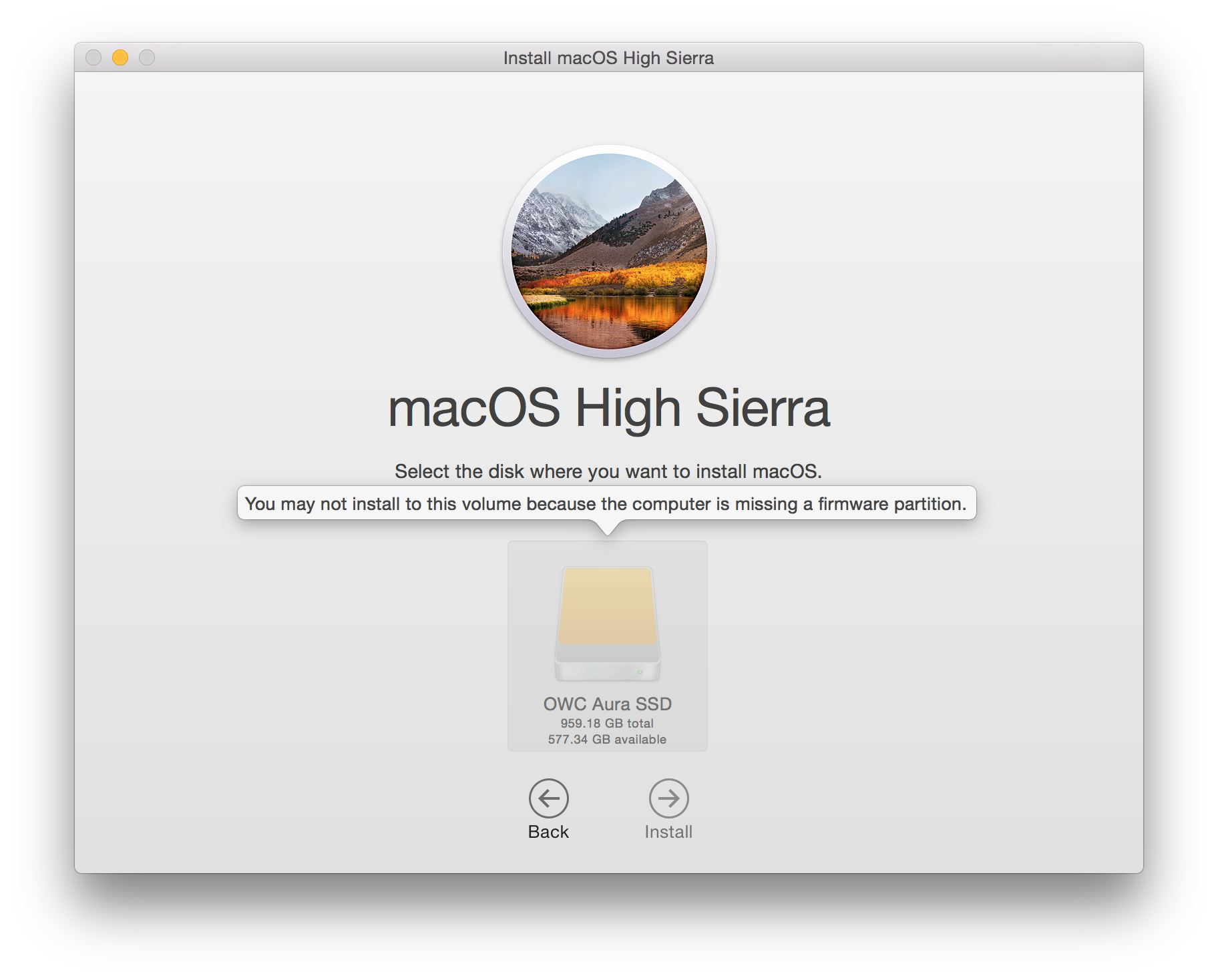 I'm not sure if this is related to other posts (e.g.) I've seen about OWC SSD drives installed internally but appearing as external. Or, if it has to do with attempting a three-version leap in the OS.

I have an external Time Machine drive with a recent backup, so I guess I could attempt reformatting the OWC drive, installing High Sierra, then restoring from Time Machine. But that takes so long I'd like to avoid it if I can. Also, if the fault is in the drive itself I'm not sure it would work. Anything else I should do?

Update: I have spoken with OWC customer service, and they say I will need to reinstall the OEM SSD. Then upgrade to High Sierra, which will update the Mac's firmware. Then re-install the OWC drive, and upgrade that to High Sierra. I hope I can find the old drive...

I finally did get this to work. Here is my process with the non-functioning loops edited out. It's inspired by, but slightly different from, this process outlined by MacSales in How to Format a New Internal SSD in macOS High Sierra.

For this process, you need not just the original (OEM) Mac SSD, but also the enclosure that OWC sends with their upgrade kit. The screwdrivers (P5 and T5) come in handy too. And a spudger tool, sold separately. Also, this process wipes both the original and the new (OWC) SSDs clean, so you need a recent backup, for instance Time Machine.

The linked article says that you can replace steps 5–7 by booting into Internet Recovery Mode (option-command-R at startup). I believe this is what OWC told me in tech support chat, too. The idea is that upgrading the OEM SSD to High Sierra will update the firmware, so that internet recovery mode gives the option to install High Sierra. That didn't work for me; I could only install Yosemite in Internet Recovery Mode. If it did work, I would not have needed the enclosure, since I wouldn't need two SSDs running at once. One of the commenters says it worked for them, so maybe I screwed up.

Also, you may wonder why you can't skip step 4, put the OWC SSD in the enclosure, boot from the internal OEM SSD, and install High Sierra on the external OWC SSD. I tried this several times, and it would error out at various stages. There is a sticker inside the enclosure that says "Mac SSD only". I finally believed it.

At least this process eliminated an annoyance that I had when I originally installed the OWC SSD. Even though it was installed internally, it showed up in the operator system with an orange "external drive" icon. I think this is part of the reason the update process was so complicated—the Mac knew this drive was an impostor of sorts. But now it's got the same icon as the original one.

Edit 2018-04-13: OWC has published a firmware update (beta as of this writing) for their OWC Aura 6G SSD's which purports to deal with this very issue. Thank you to new user mauple for this suggested edit. It would have been nice if tech support had alerted me to this beta at the time I contacted them, since it did exist.

After struggling with this for a very long time, and not having access to the original HD as that broke, this EDIT and OWC Support helped.

There is a firmware update from OWC, which is in beta (not always stable, worked for me all 3 times), that you can find here.

You'll be prompted to download the Firmware Update (as of writing 2.3.15.1067) and the installer.

When the installer is downloaded, you'll be prompted to do those steps:

Thank you to support and this answer for solving the problem and hope that helps :)

Not the answer you're looking for? Browse other questions tagged ssd high-sierra .

0
Is there an external SSD enclosure compatible with OWC Aura SSD?
3
Clarification on upgrading the OS and using OWC SSD?
2
Installing macOS High Sierra on Mac Pro 2009 with a firmware upgrade requires a firmware update - is it safe?
1
OWC Aura SSD Firmware Update from Mac Recovery Terminal
2
Is there a way to update a Mac to High Sierra or Mojave if OEM SSD is unavailable?
1
Concerns re: upgrading to an OWC Aura Pro SSD on my 2015 Macbook Pro 15" retina
2
Installing fresh macOS High Sierra on SSD (Crucial MX500) on iMac 2011 21.5 (A1311) (Mid-2011)
0
Updating firmware to get OWC Aura Pro X2 SSD to show via Macbook Air