What does “The iTunes Store is unable to process purchases at this time” message mean and how can I fix it?

I’ve been getting this message a lot. It just started today and I haven’t tried to purchase or download anything. 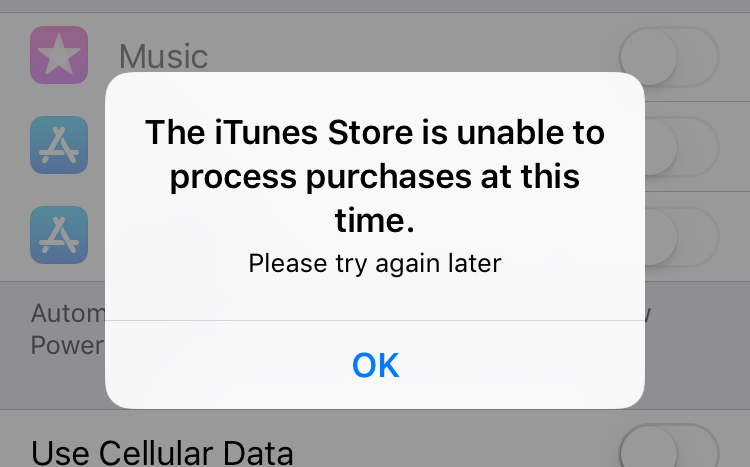 This message typically occurs due to some temporary server side issue. For troubleshooting an error message like this, you should view Apple's system status.

There is no user-side fix. You have to simply wait for Apple's services to come back online.

I had this problem for several weeks, starting in December 2020. I had four apps marked as having updates available. All of these failed with the error shown if I tried to update them. This is on an iPhone 4S running iOS 9.3.6.

Apple support suggested using two step security and registering a payment method, but these had no effect. Reset Network Settings had no effect. In Settings -> Privacy -> Location Services [on] -> System Services -> Setting Time Zone ON had no effect.

At this point I noticed that I could install a new app (different from all of the ones waiting updates).

WhatsApp was the app I was keenest to update (because they blocked the use of my previous version). I deinstalled WhatsApp. I installed WhatsApp. The first attempt no longer showed the "The iTunes Store is unable to process purchases at this time" message but failed in an obscure way. The second attempt worked!

Actually, there is a way to fix this on user-side. I've been having this issue for several days and nothing seemed to help. The fix isn't soft, you should either restore your device from iTunes backup using your mac (not iCloud backup that Apple recommends) or set it up as a completely new device. Setting it up as a new device will erase your programs and data so you should understand what you're doing, however for me it was the only option to fix the "The iTunes Store is unable to process purchases at this time" issue.

Not the answer you're looking for? Browse other questions tagged iphone ios itunes ios-appstore .

1
What can change so the app store fails on a network where purchases used to work fine?
0
Cannot connect to App Store due to unactivated SIM?
19
“Unable to download the app at this time”
4
How to disable the “this cable or accessory is not certified” message on iPhone?
9
What does this symbol in iTunes mean?
0
What does this Japanese message in the App Store when updating apps mean?
4
How can I delete old messages on my iPhone to free up space (NOT the whole message thread)
2
Message effects no longer work on my iPhone
0
"Instagram could not be downloaded at this time. No matter how I try I am not able to download the app. Pls Help