Can the 2011 Mac-Mini (not the Server Edition) Support an Additional Hardisk, SSD?

Is it possible to add an additional HDD or a SSD to a 2011 mac-mini (no the server edition) in addition to the 500GB HDD that comes with the computer?

If so, are additional parts required? Are these parts readily available?

You can install any drive, provided it's of the 2.5" variety (notebook disk).

iFixit has a kit you can purchase (see image below), or you can readily just buy the flex cable (PART# 922-9560). I purchased mine from PowerbookMedic for $29.95 and a few dollars shipping/handling. The iFixit kit includes the logic board puller, but I used two small screw drivers, which work just the same. If you have no qualms about spending the extra dough for what is likely a one-time affair, then by all means. 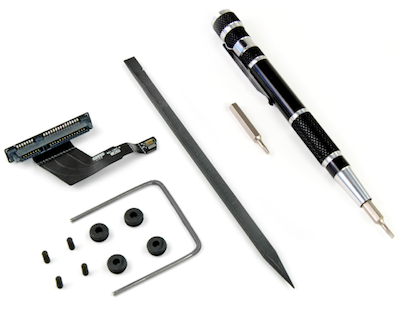 Do note that you can pick the grommets from Home Depot (they are 1/4" grommets) on the cheap. I had to shave a bit off to make them thinner, but they work beautifully. The screws are standard "headless screws". 8mm M3 with a 0.5mm thread. The ones provided in the iFixit kit are not OEM, but just aftermarket screws that meet the dimensions. In any case, the grommets and screws are not entirely necessary as the limited room stops the drive from thrashing around. And since the unit is likely to stay stationary, not a large concern. It depends entirely on the level of craftsmanship you possess.

Macrumors has a thread outlining the process, and that can be supplemented with iFixit's own guide.

One thing to note, after you've installed the drive, reset the PRAM/NVRAM to ensure a problem free experience. I had data on my secondary drive and saw my boot sequence lengthened to minutes as a result. Resetting the unit's PRAM did the trick.

The entire process took me about 1 hour, but it all depends on your level of proficiency.

While adding the second drive is possible without removing the logic board, you will not be able to align the screws with the chassis (and will crush the grommets in doing so). You'll also wrestle 3x as long trying to get the SATA cable connected. There is literally not a mm to spare inside the unit. If you want to do the job right, you will need to take the mini apart and systematically install the drives one at a time so the holding screws line up with the grommets, the rest is a cakewalk.

Sure. iFixIt has a guide for that.

1
What is the specification of the extra screws needed to install a second drive to an upper-drive populated Mac Mini 2012?