I am developing a custom VPN client plugin for iPhone, working on iOS 11 devices. I am hoping to set up nested VPNs so that the traffic is double encrypted.

I am working with Per-App VPN, as well as both Always-On and On-Demand style systemwide VPN clients. As an example, what I would like to do is access a IPSec VPN Endpoint for Per-App connections, where the endpoint exists on a network only accessible through an SSL VPN endpoint that is connected through an Systemwide VPN.

Please refer the following diagram for further example of what I mean: 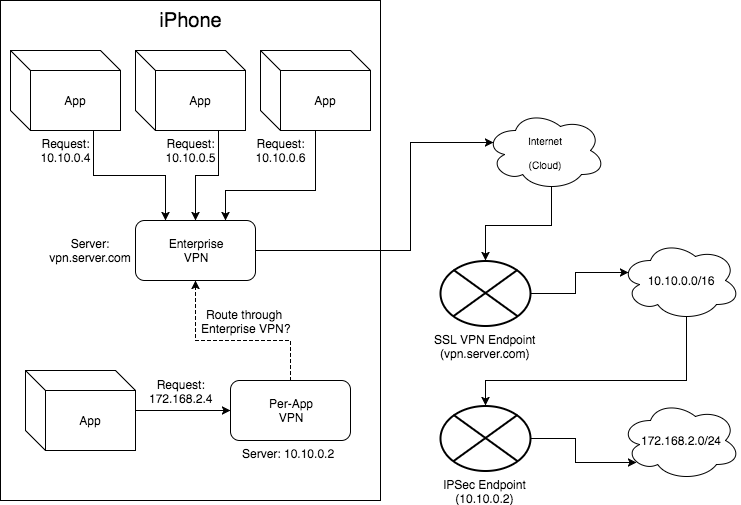 Note that the Systemwide VPN doesn't need to be SSL, as I understand Always-On VPN may be restricted to using the iOS built-in VPN client with IKEv2.

For the systemwide VPN, I have a strong preference for Always-On as it doesn't allow the user to disable it. In my testing however, it seems that when an Always-On VPN is loaded onto the iPhone, all of the other VPNs disappear from Settings and cannot be enabled. I have been able to configure a systemwide On-Demand VPN and a Per-App VPN to operate concurrently, but not yet with one passing through the other.

The part I am uncertain about, and so far haven't been able to replicate, has been marked with the dotted line. Can the Per-App VPN connect and route through the Systemwide VPN?

I have received a response from Apple Support:

I talked to VPN Engineering about your goals and, alas, what you’re trying to do is just not possible. We specifically prevent traffic from a VPN provider from going through some other VPN interface, so your per-app VPN provider — be it a packet tunnel provider or an app proxy provider — won’t be able to route traffic over the IKEv2 VPN interface.

As of iOS11, this is not currently possible.

Not the answer you're looking for? Browse other questions tagged iphone ios vpn mobile-device-management .

1
Which VPN Server Hardware is Best for Accessing from Mac Clients
3
Can Macs connect to VPNs with MS-CHAPv2?
5
iOS VPN On Demand with multiple VPNs
5
sharing internet/vpn with ipfw, can't access google.com over https
2
Nested list in iOS Notes
2
Intermittently cant connect to VPN from Laptop, but always works from iPhone
1
Why Does My Apple Watch Lose Connection to My iPhone When Using a VPN