I have a workflow in automator that "receives a selected PDF file in Finder", then "Open finder items", follow by "Set PDF Metadata"

When running the workflow, "Set PDF Metadata" opens a window that takes some inputs (title, author, and so on), and then requires me to press "Continue" to move on the next step of the workflow.

The window that "Set PDF Metadata" opens is always partially minimized, so I have to manually resize it bigger every time I run the workflow. Is there some way I can specify the size and position that the window should open at?

To replicate this behavior a simple workflow that goes as follows should work:

Yes, it is possible to set the position and size of the Set PDF Metadata action's window when run from an Automator Service, however it requires a bit of a creative workaround.

I have tested the following and it works for me under macOS High Sierra.

There are two primary components for this process, one being the Automator Service named Edit PDF Metadata, and the other, an AppleScript application that sets the position and size of the Set PDF Metadata action's window.

For the Automator Service, which I saved as Edit PDF Metadata, the image below shows the settings. 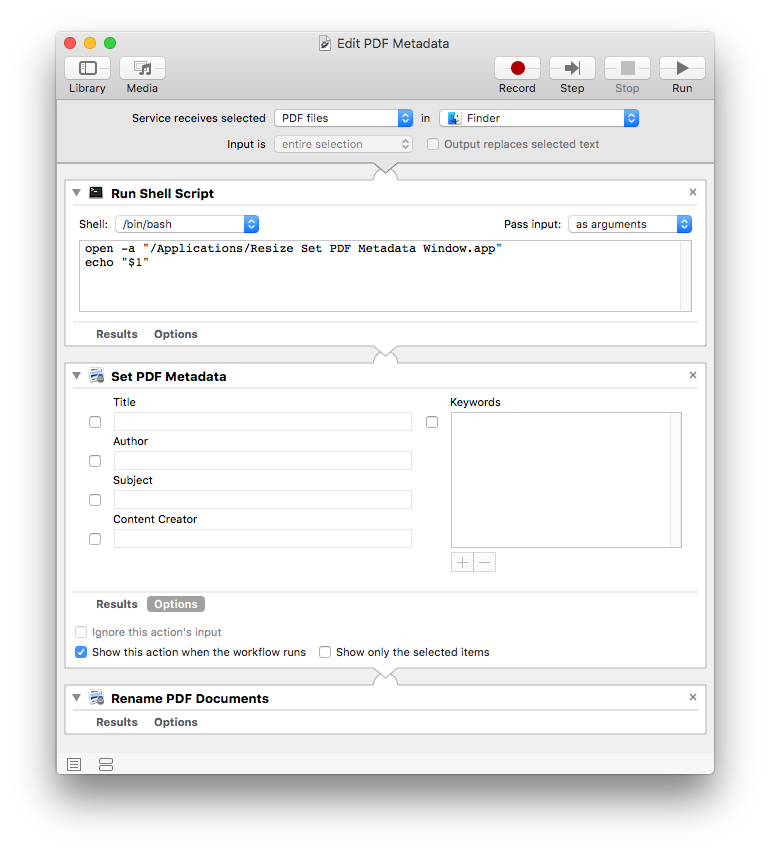 Next, the desired position and size of the window for the Set PDF Metadata action needs to be determined:

In Script Editor, open a new document with the following AppleScript code, but do not run it yet, just have it ready.

Now in Finder, select a PDF document and right-click selecting Edit PDF Metadata from the Services section of the context menu.

Make note of the results for use with the code, which is used next, to create the Resize Set PDF Metadata Window.app in Script Editor.

You can now click the Cancel button on the Set PDF Metadata action's window, as it has served its purpose to this point.

With that done, Edit PDF Metadata is ready to used on a PDF document in Finder from the Services section of the context menu. It is also available from the Finder > Services menu as well. Also a keyboard shortcut can be assigned to the service in: System Preferences > Keyboard > Shortcuts > Services > Files and Folders

Also note that by default, the metadata added to the selected PDF document is automatically saved upon pressing the Continue button, so there is no need to use the Quit Application action set to Preview with the [√] Ask to save changes check box clicked. That is unless you added the Open Finder Items action, then add back the Quit Application action set to Preview too. (Note that Ask to save changes did not work in my testing.)

NOTE: Use caution with the Rename PDF Documents action, because if the Title check box is checked in the Set PDF Metadata action's window but text box is left blank, it will delete the PDF document upon clicking the Continue button! (This appears to be a bug in this action under macOS High Sierra.) Additionally, if you set the Title to the name of an existing PDF document, while the metadata is changed, nonetheless the target file is not renamed. As always, insure you have proper backups before running automated services upon your files.

The only drawback to this method that I can think of, is that only one Automator Service can be run at a time, this one, otherwise it will not be able to get window 1 of process "com.apple.automator.runner" if there is more than one "com.apple.automator.runner" process running. But how often does one really need to have more then one Automator Service run at a time.

If you do not want to have the Dock Tile for the Resize Set PDF Metadata Window.app show on the Dock, then in Terminal use the following command:

Afterwards, you can use the command with -bool no to have to have the app's Dock Tile show on the Dock.

Note: The example AppleScript code is just that and does not employ any error handling and is meant only to show one of many ways accomplish a task. The onus is always upon the User to add/use appropriate error handling as needed/wanted.

Not the answer you're looking for? Browse other questions tagged automator pdf metadata .

2
Applescript: Help with idle and hiding from finder?