Second screen is detected by OSX but isn't turned on

I have a MacBook Pro 2017, running High Sierra 10.13.3 (17D102) connected to a ThinkPad USB-C Dock, and two Dell U2412M screens attached to the dock, one by HDMI to Thunderbolt and the other by DisplayPort to DisplayPort.

OSX successfully detects both screens, as seen in Displays dialog, 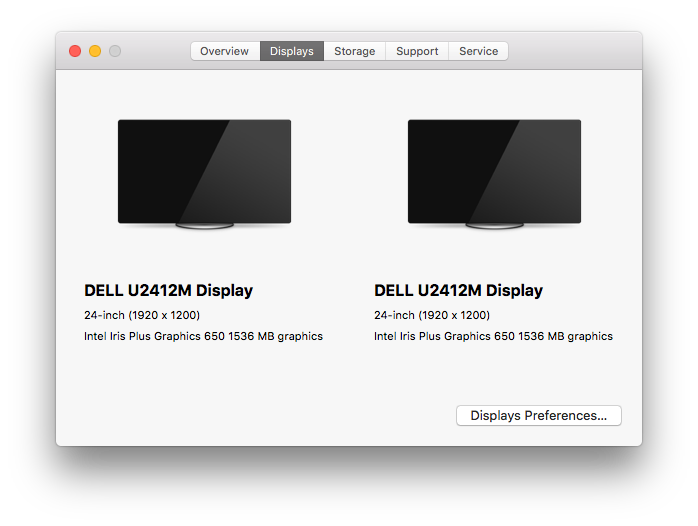 But for some reasons, most of the time, the secondary screen stays turned off. It might, or might not, wake up anytime during my work on the computer. The behavior of it is pretty inconsistent.

I tried changing the connections to every possible variation, DisplayPorts only, switching ports, literally everything, but the behavior of the second screen keeps being unstable.

What am I missing? Why is the second screen mistreats me like that?

Multiple monitors connected as your by DisplayPort (and/or HDMI converted from DisplayPort) served by a USB-C dock won't work on macOS. It will work on Windows, which is what Lenovo advertises.

For macOS you'll need a Thunderbolt dock instead to be able to do this.

A different solution is to plug one monitor into the dock, and the other monitor into the Mac. However you'll need to connect two cables to the computer this way, which is probably what you want to avoid when using a dock.

Not the answer you're looking for? Browse other questions tagged macos macbook-pro dock thunderbolt displayport .

4
HDTV only detected when turned off (connected via DisplayPort to HDMI)
0
Wired mouse detected but not responding
1
Preview of screen on second monitor
4
Connecting second screen via Thunderbolt and HDMI
1
Screen sharing turned off, but appears as “enabled”
2
MBP 2010 mini-DisplayPort detected but “No Signal” when connected to external DisplayPort monitor
8
Thunderbolt 3 dock disconnects when MacBook sleeps
0
External Monitor is detected but displays black screen on MBP 15" 2017