Why aren't my cores more busy?

But, when I look at the CPU activity in the CPU History half of the rows are blank (image below).

Does this suggest one of my CPUs isn't working? 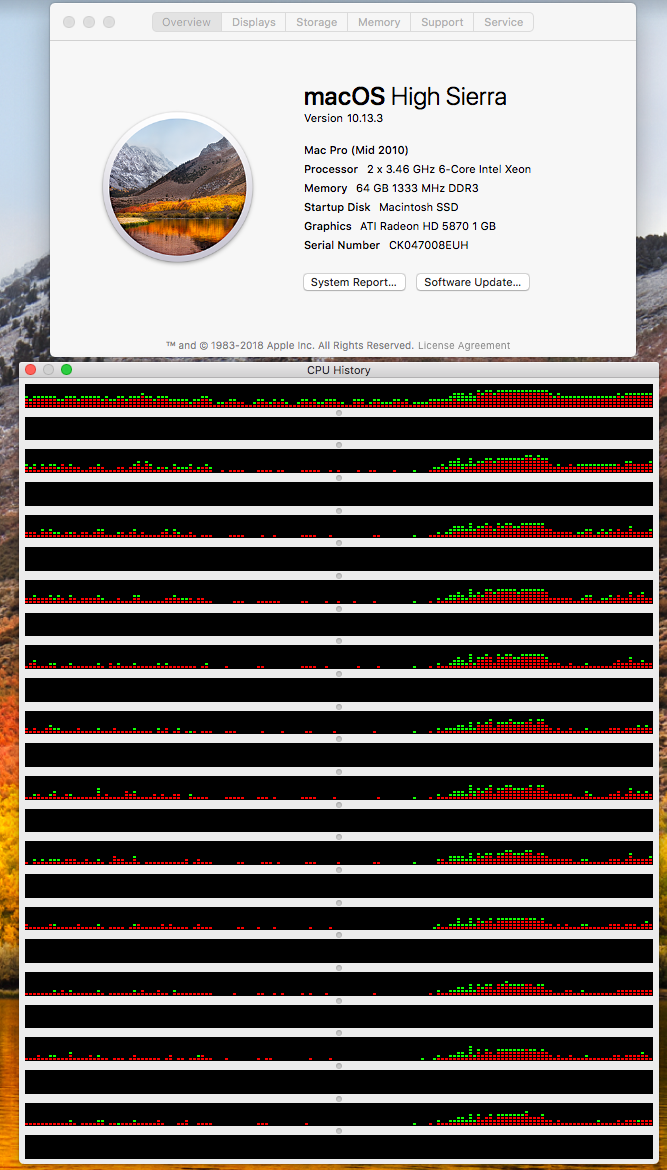 Each alternate line is a hyper threaded core, not a real core - count the lines, there are 24, not 12.

If you're doing something processor-intensive, it makes more sense to use real cores, so tasks first share out to all the top line of each virtual pair.

I'm sure someone will come along with a better technical explanation, but in short - no, it's not broken, both CPUs are functioning normally, but maybe the software isn't fully using all the resources.

I have no explanation for why FCP would work differently to 'regular' conversion apps, but the picture shows the difference.

No, this is not an indication of anything being wrong with your CPU.

The reason that you have extra rows are probably that your CPU supports HyperThreading. HyperThreading does not mean that you have double the amount of cores, but rather that in some (rarer) cases, the system might be able to run two operations at the same time on a single core.

So everything is as it is supposed to be.

Not the answer you're looking for? Browse other questions tagged macos high-sierra cpu activity-monitor .

30
What does it mean when a %CPU exceeds (# of cores) x 100%?
5
Help identify what uses the CPU when the Activity Monitor list of all processes does not help
10
Make Activity Monitor show more than 4 cores worth of CPU usage in the Dock
13
Why does Apple Activity Monitor report that my Mac with a dual-core Intel i5 Ivy Bridge CPU has 4 cores?
0
2010 2.66 GHz 12 core Mac Pro not utilizing all 24 threads?
2
Activity Monitor dock icon CPU history aggregate
1
Why is Adobe Acrobat using only one core for a heavy task, and how can I make it perform faster?
1
Erratic cores usage
4
iMac occasionally gets very sluggish. Memory Pressure is high and its hard to use computer. Why is this?