Ask Question
Asked 2 years, 8 months ago
Active 2 years ago
Viewed 4k times
3
This question already has answers here:
Can I still use the older Airport Utility 5.5.3 if I install the 6.0 version of Airport Utility? (4 answers)
Closed 2 years ago.

I would like to install the Airport version 5.6.1 on MacBook with High Sierra.

It already has the Airport Version 6.3.8 installed.

You can do this without modifying your system.

Use something like Pacifier to extract the AirPort Utility.app and Apple80211.framework from the installer.

Then, run these two commands in Terminal whenever you want to use it (substituting the correct paths obviously):

This works all the way up to Mojave.

Just start with the version offered, configure it and after that Apple recognise it and ask you to upgrade to a new version - I have installed on two devices this year, on High Sierra. The actual version is 6.3.8 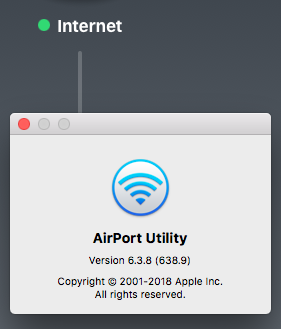 Not the answer you're looking for? Browse other questions tagged high-sierra airport .

6
Change Airport signal strength
1
The path /System/Installation/Packages/OSInstall.mpkg appears to be missing or damaged - OSX 10.13.1 - High Sierra
8
How do you perform a clean install of macOS High Sierra with APFS?
3
BitTorrent Automatically Installed on MacOS High Sierra
2
Can I install both High Sierra and Mavericks on my Mac?
7
Downgrading from macOS Catalina to macOS High Sierra