I have recently upgraded to an iMac (Retina 5k, 27-inch, 2017) that has High Sierra (OS version 10.13.3) installed. I have an Asus monitor that I used with my old iMac and had no issues. Ever since the upgrade (usually not more than once a day), the second display will suddenly turn blue: 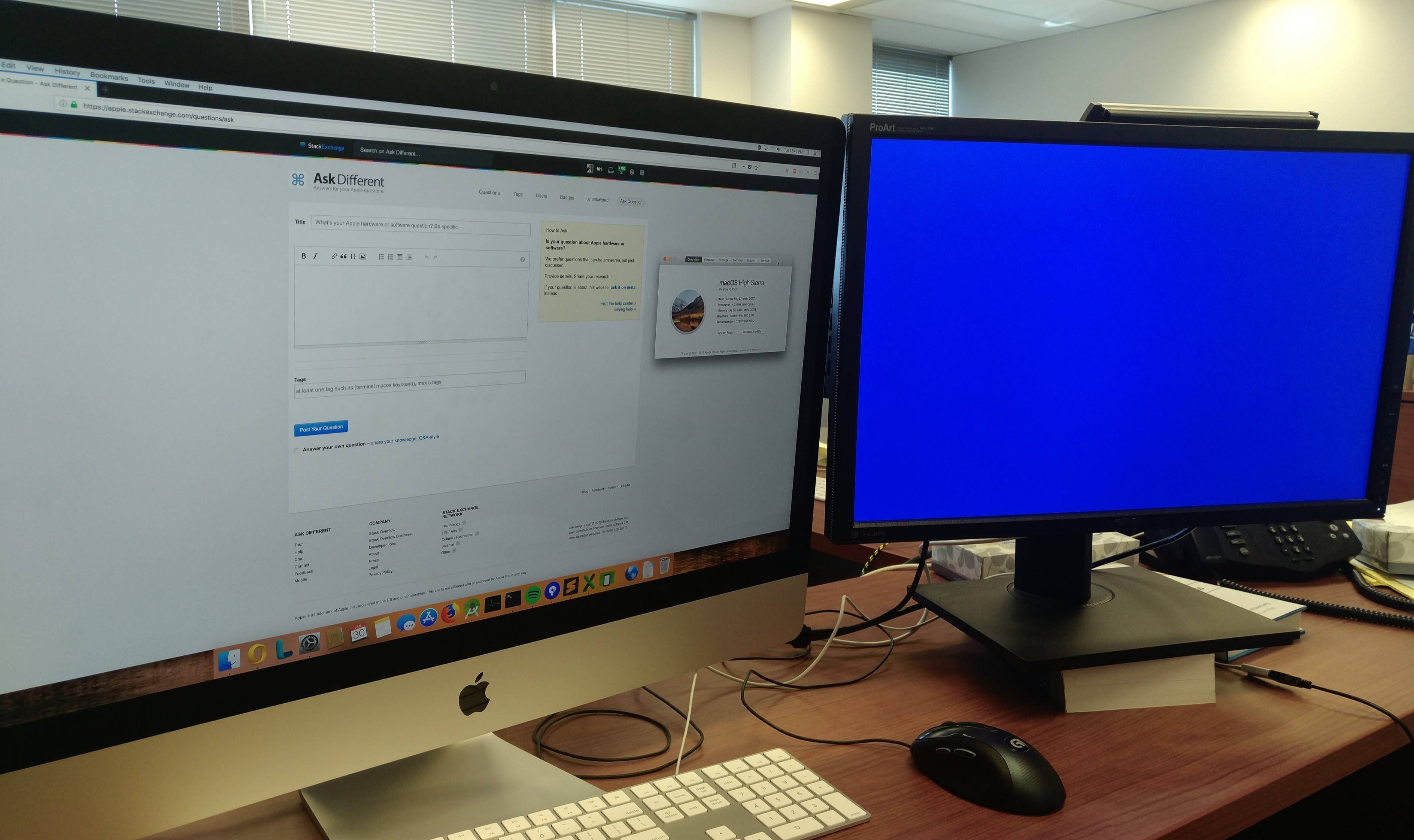 The only cure I've found is to disconnect the screen and reconnect it. Another similar problem I have with this computer is that my headphones are not recognized all of a sudden and I have to unplug and re-plug to resolve this.

I have a feeling there is some sort of software glitch as both the monitor and headphones worked well on the old computer. I would appreciate any help resolving this.

Update: Ever since I've reset my SMC 2 days ago, I haven't seen the "blue screen" (thank you @howdytom), but I am still not sure that this a permanent solution. As I am using a cable that was given to me by the IT department, I am not exactly what adapter it is. But here is a picture of it: 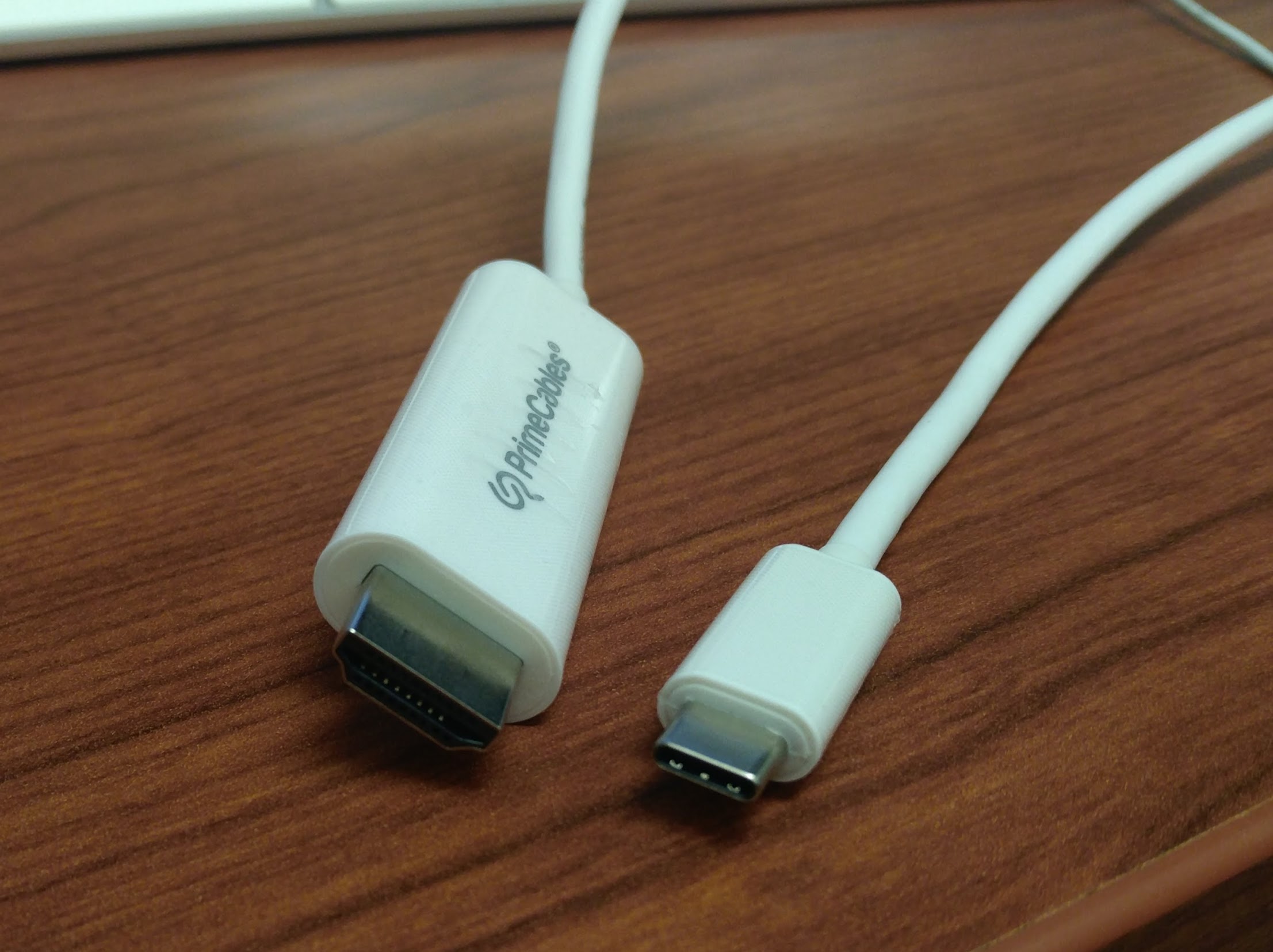 BTW, after I disconnected the cable the headphones were not recognized again and I had to plug and unplug them.

You can try to reset the SMC on your iMac

Also, you can try to reset the NVRAM

The problem that you are having due to the signal conversion from DisplayPort to HDMI; specifically the clock signal.

Asus Monitors turn blue when it cannot properly connect (sync) with the display source. A reboot will usually fix the issue, but this is not fix but a major inconvenience and stretches the definition of "work around"

Most DisplayPort to HDMI adapters are passive (they're inexpensive), but what you need is an active adapter which will recreate the the HDMI signal and not just reorder the signals.

Ideally, you wan to "go native" with DisplayPort to DisplayPort for the best singal and performance possible, but when that is not possible, using an active adapter is your next best bet.

HDMI is a flaky signal to begin with from clock signal being a dedicated wire versus being embedded (DisplayPort) to audio issues:

I personally experienced the HDMI audio issue dropping out not just on Roku, but on Apple TV and even same brand (Sony) TVs connected to Blue-Ray players. It's what prompted me to research into this to solve the issue.

What I found was that you could easily fix the problem by switching inputs (i.e. Roku/Apple TV drops audio, switch to cable TV input for 2 seconds, then switch back). As for connecting TVs to HDMI display inputs, I found that the computer (Apple and PC) would require either putting to sleep or rebooting due to no display - the screen would be recognized, but there would be no image.

I found (on the Apple/PC side) that standardizing on DisplayPort solved these issues. One of the reasons for this is that the clock signal is embedded within the signal as opposed to being on two separate wires. When converting, the issue (IMO) was that going from DP (no dedicated signal wires) to HDMI (expecting dedicated signal wires) was the fault.

HDMI is the only option

HDMI is a consumer grade connectivity and thus, they’re everywhere. As in this case, the Asus monitor has only HDMI ports. In this case the key is to use an active adapter that recreates the actual HDMI signal. I write more about this in the post: Passive vs. Active

If I were you I would start simple and try a different cable, faulty or cheap cables can cause unexpected behaviour with monitors.

If resetting the SMC and NVRAM doesnt help then you'll need to reinstall MacOS since the issue maybe software based. I'd also do a first aid on your hard drive to make sure that its still healthy.

10
MacBook Air occasionally freezes when external monitor is connected
3
Can I connect a mid-2011 iMac to an external HDMI display with a mini Displayport-to-HDMI cable?
3
External Monitors Flicker when plugged into my Mac
0
Can't connect second external display (but only at home)