I had one iPad 2 and I got a second one. I want to sync them both to the same iTunes account from the same Macbook Pro. When I plugged in the second iPad it asked me something along the lines of

Well, I wanted to share programs and things between them so I thought it would be good to choose "restore" - however that seems to have been the wrong thing to do because iTunes now thinks I have two of the same iPad and won't let them each be customized.

How can I backup to this step where I can have it ask me this question again? (Basically, wipe the second iPad 2 and start over.) I thought about maybe "restoring" it but then I didn't want iTunes to think that my only iPad had been wiped and then wipe the original the next time I connected it. 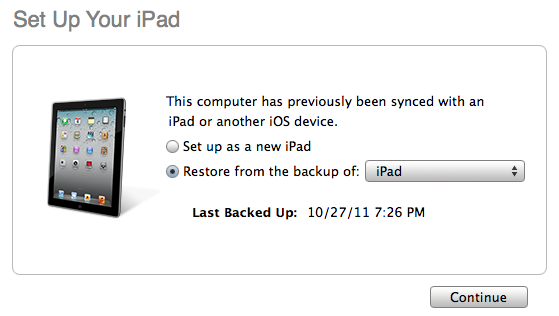 You can wipe the data and return it to factory settings by choosing settings - General - Reset.

Like the first answer you should now name them differently.

Just to add to that you will also need to restore one of them to empty, then set it up using iCloud, add iCloud to your other iPad 2 and then they will share data, but you will also be able to add an app to one and delete from the other without losing all data, next time you sync.

You can restore safely, iTunes won't try to restore the other. But before you do, you might want to try changing the name of the second iPad to see if iTunes treats it differently. If you have iOS 5, you can do this by opening Settings and going to General > About > Name. If you don't have iOS 5, connect it to your computer and double-click on the name in iTunes. That change shouldn't propagate to the other device.

Not the answer you're looking for? Browse other questions tagged itunes ipad data-synchronization restore .

5
Sync iPhone/iPad with iTunes after library rebuild
2
How can one copy photos off an iPad onto a Windows computer (prior to syncing)?
4
How to upgrade an iPad without losing data?
2
Transfer my iPad to different user account on same computer?
3
How can I keep apps on my iPad after I removed all apps in iTunes?
5
How do I sync iPad to iTunes without losing iCloud stuff
0
iPad fails to sync : unknown error 1140
0
How to move particular applications from one iPad to another?
3
iPad Mini Not Restoring?