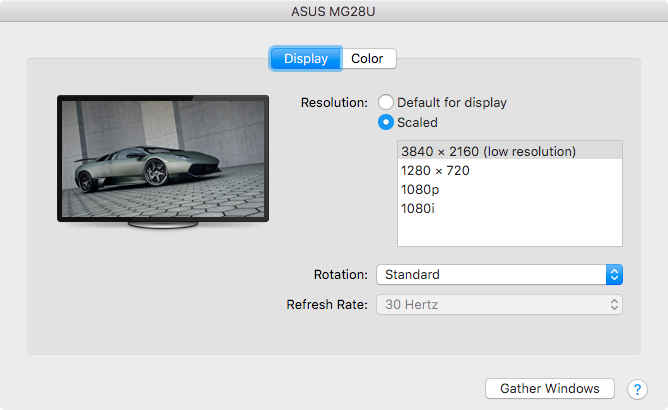 I also have an early 2015 MacBook Pro, which supports these displays at 4k60. This confirms that the cables I'm using (Mini DisplayPort to Display port) are not the limiting factor). Interestingly, the preference pane looks different on my MacBook Pro, offering a bunch of scaling options, with no mention of refresh rate (although I can visually confirm it's 60 Hz): 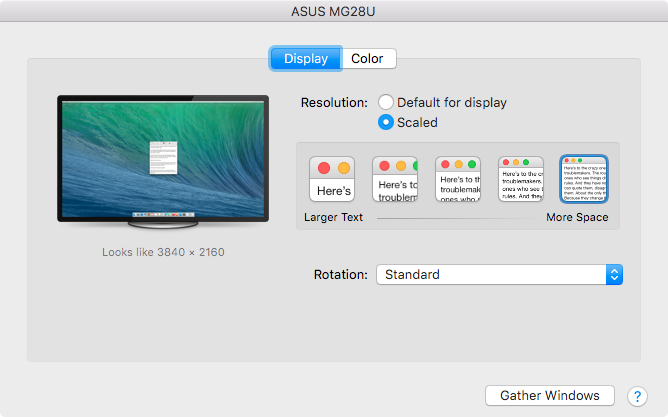 I am trying to figure out why these two computers treat these monitors differently, and show different settings for them.

There is conflicting information about 4k support on this Mac. According to Apple's official technical specifications for this (iMac (27-inch, Late 2013) - Technical Specifications), its limited to only 2560x1600:

Apple's page on Mac 4k support (Using 4K displays, 5K displays, and Ultra HD TVs with your Mac) contradicts this, claiming that 4K60 is supported for SST displays (emphasis mine):

Assuming this information is correct (I'm skeptical given the contradictions) this iMac can support 4k60Hz for SST displays, but not MST displays. In that case, I suspect that these Asus MG28U displays use MST, but I cannot find any information regarding whether they're SST or MST.

Has anyone gotten 4k60 to work with a late 2013, 27" iMac? Is there some setting or something that I am missing? Any help would be appreciated.

DisplayPort v1.2 -- vs 1.0 and 1.1 -- newly supported 60Hz UHD (4k), where the older specification had only enough speed to support 30Hz. [Search "specifications displayport". (On the Wikipedia page, you have to look at two separate tables.)]

Since the two machines are running the same version of the OS, I would guess that the difference in the presentation of the resolution is a function of the DisplayPort version... although I would have thought that it was the OS itself. ["Larger text" means (non-native) larger dots on the same screen (and fewer of them), and "More space" means, in the last case, full native resolution.]

As for the Apple specification page... one might wonder if there was an improvement in the hardware capability enabled by the software (i.e. the OS)... but I would guess that it actually was a mistake (surprisingly enough); the NVidia specifications for all the pertinent graphics cards say 3840x2160. [I note that Apple has been known to cripple its hardware -- as in, such that you can get more than advertised, out of it -- on occasion [ref. incl. my own machine], but I can/do not see that here.]

BTW, my experience with my dual-panel display (which I think is "MST") is that you can catch it out sometimes, with one side lagging behind the other briefly.

Not the answer you're looking for? Browse other questions tagged display imac displayport 4k .