Why USB stick formatted with exFAT on Windows is not mounting on Mac OS High Sierra?

I got a 64GB USB Stick formatted as exFAT from Windows containing a lot of files. The stick mounts without any problems on a Windows 10 system. My MacBook Pro running MacOS 10.13.2 cannot mount it. Instead the disk utility tells me it contains kind of Mac OS extended file system (German, sorry) but unable to mount (also information looks strange): 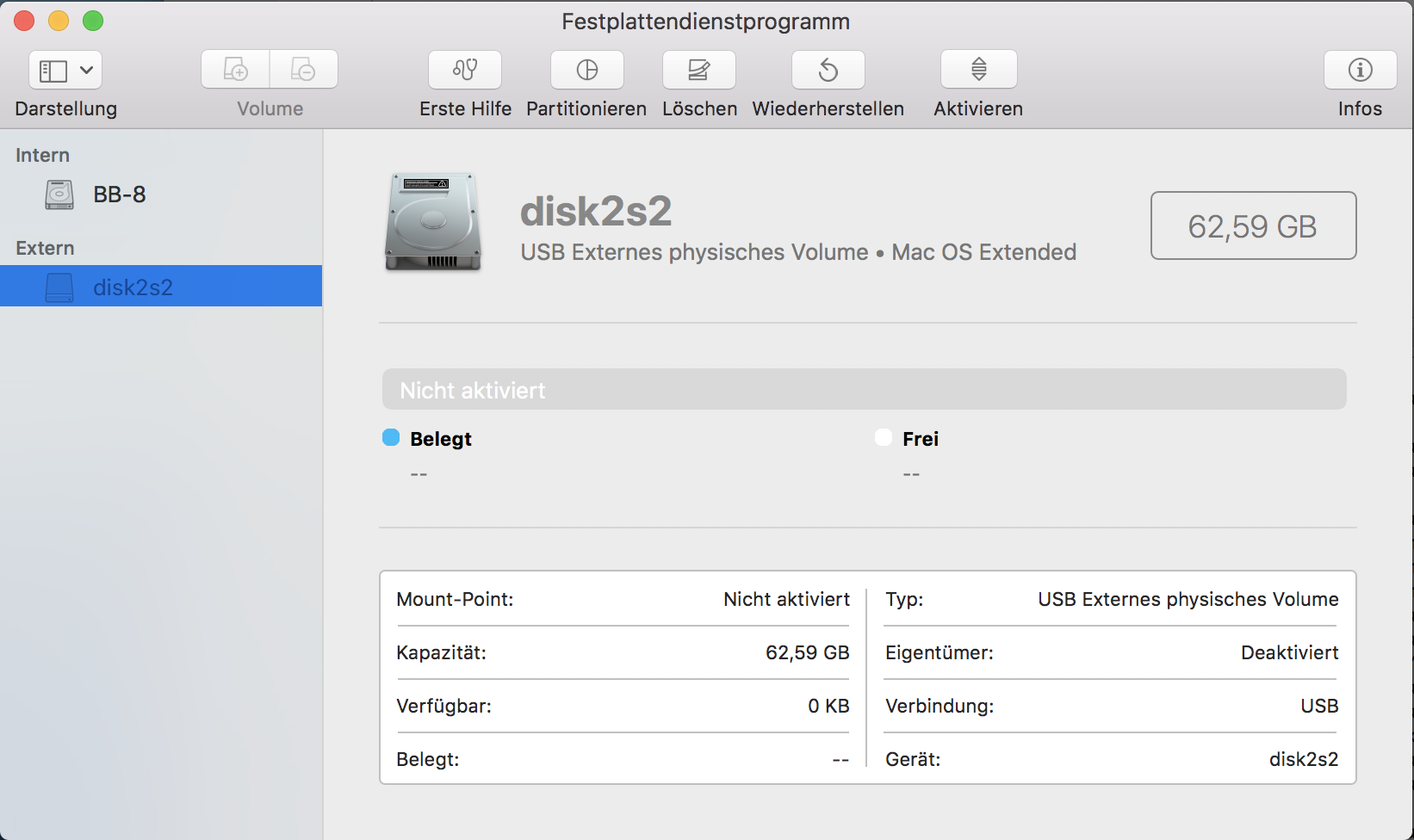 Or from command line:

I have no idea why the volume is not mounting correctly. Any idea what to do without reformatting and loosing the data on the stick? Is there any option to manually mount the filesystem as exFAT using command line?

In your question, the output from the diskutil command shows the ExFAT formatted partition to be Apple_HFS. What should have appeared is Microsoft Basic Data. Therefore, the partition table has partition type error. Microsoft Windows will not care, but Apple macOS does.

Below I assume the USB stick (flash drive) is disk number 1. If not, then make the appropriate substitution. The detail partition command should show the incorrect partition type value of 48465300-0000-11AA-AA11-00306543ECAC.

Issues Regarding Using Windows Partitioning Tools on a Mac Computer.

Below has been referred to as THE GOLDEN RULE.

Never use the Windows diskpart or diskmgmt.msc commands to change the partitioning on a Mac computer.

Note: The diskmgmt.msc command displays the "Disk Management" window. An example is shown below. 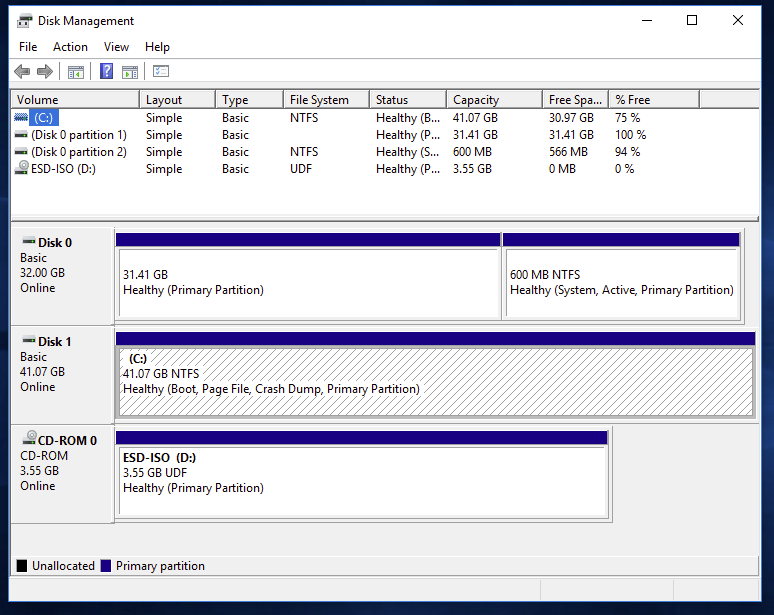 Originally, Mac computers could only BIOS boot Windows. In order for this to occur, a hybrid MBR/GPT partitioning method was employed. The Golden Rule was created because of this hybrid arrangement. Essentially, the diskpart and diskmgmt.msc commands would ignore the GUID partition table (GPT) and only update the MBR partition table. This could (and often did) lead to corruption of the partitions stored on a drive.

Eventually, Apple adopted the newer EFI boot method for Windows. When this method is employed, the hybrid MBR/GPT partitioning scheme is not used. Instead a a pure GPT scheme is employed. One would think this would negate The Golden Rule, but for a different reason, this rule lived on. This reason has to do with bugs introduced by the installation of Apple's Windows Support Software.

Windows Support Software, among may other things, allows Windows read-only access to certain Mac formatted partitions, such as "Mac OS Extended (Journaled)". Since the Windows software can now read these partitions, the software believes the partitions are Microsoft type partitions. When running Windows partitioning software, this can cause many possible side-effects. One is the replacement of the correct GUID partition type with Microsoft's partition type GUID of EBD0A0A2-B9E5-4433-87C0-68B6B72699C7. So it seemed, The Golden Rule still applied.

Recently, cases have been found where The Golden Rule can be broken. In other words, there are cases where the diskpart command can be used to edit a drive partition table when a pure GPT scheme is employed.

One such case is when the Windows Recovery Environment is used. This environment can be entered by holding down the shift key while selecting to restart Windows. When you navigate to a Command Prompt window, you can access the diskpart command. This command, when entered here, is unaffected by the Apple's Windows Support Software. Basically, the Windows Recovery Environment loads the Winre.wim image file, which was unaltered when the Windows Support Software was installed. This image file contains a copy of the diskpart command which can be executed safely.

Thanks David Anderson for your detailed answer! It points me to a solution on MacOS.

My situation was the same with Arne's, except:

I previously formatted my drive on Linux and then on Windows. Guess Windows did not write the partition type. Let's do it for her on MacOS. First let's find out how our GPT table's laid out:

There are 3 numbers to take note of from the output. What the numbers are depends on what was printed on your terminal. Do not copy mine. Do not lose them until you're done.

Look at the line that says about your partition. The 3 numbers are:

First remove the wrong partition. It does not remove our actual data. In this command we use the number index, in my case 1:

And then we add the correct partition. In this command we use all the 3 numbers: start, size and index. In my case they are 2048, 240252895 and 1. Replace with yours where appropriate.

When you try to mount it through Disk Utility, it decided to mount as Apple HFS automatically based on the observation it made, which it indicates your drive to be a MacOS Extended file system drive instead of Microsoft Basic Data - ExFAT.

I’ve encountered similar problems when I formatted my drive on Windows and then became unrecognizable / unmount-able, to manually mount a partition as specific file system, the following command line will do the trick:

For another, one thing that I would personally suggest is to never try to check and repair a “corrupted” exFAT formatted drive (formatted with Mac) with Windows’ chkdsk command line even if you think your drive is corrupted, and that should go with the GOLDEN RULE that @David Anderson mentioned about, chkdsk really annoyed me a lot because it damaged 3 of my USB drives while I was entrusting it to fix the drive with all the data on it...

I had the same problem. I tried this: I tried to reformat the USB drive on the Windows 10, but this time I hit the button 'Restore device defaults' and selected 'Default allocation size', and it worked. I was then able to access the drive on the Macbook.

Not the answer you're looking for? Browse other questions tagged macos usb mount exfat .

13
Why is exFAT so slow on Mac?
1
Macbook Air 6,2 High Sierra not detecting bootable USB stick
2
Bootcamp disk not recognized, can’t get gdisk to work
2
Mounting USB stick in single-user mode: unsupported sector size (0)
2
Formatting a USB Drive for use on Windows with FAT/exFat