This story about a new Thunderbolt 3 dock from Promise Technology shows one of the two USB 3.0 ports labeled “USB 3.0 BC1.2”. 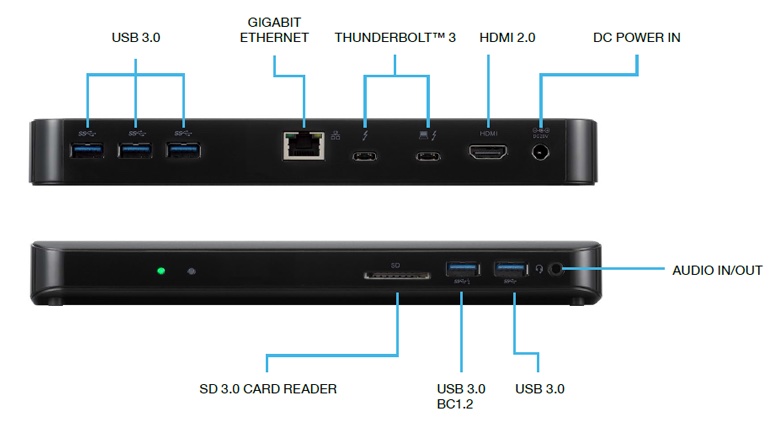 Some searches show results for "BC 1.2 port" but I've not yet seen a definition or explanation.

BC 1.2 is an abbreviation for (USB) Battery Charging (revision) 1.2. I'm no USB specs specialist so I can link some abstracts/files only:

Basically it's a USB 3.0 port with some extra features to detect devices that can make use of charge currents beyond the standard 900mA.

The TLDR on this is that sometime in the last 10 years the minimum spec on powered USB-A ports became 1.5 A, and maximum became 3 A, but 2.4 A in practice. USB-BC is increasingly becoming a redundant a meaningless standard. Being replaced by USB 3.x and USB-PD.

From the beginning of USB people discovered that was trivial to get 5 V of power from USB ports by just connecting to the V+ and GND. This was being used for more than it's intended purpose of providing power to parallel port adapters and the like. To this end it became customary to allow 100 mA or 500 mA on systems are were "asleep" to allow keyboard wakeup, or all too often run novelty Christmas lights.

What the USB groups came up with was the USB-BC standard for providing power to devices even though they might not he making a data connection connection to the host. For USB 2.0 devices this had the benefit of increasing power to a device to the max of what USB 3.x allows. This meant USB-DC devices might enjoy 1.5 to 2.4 amp power on the same old USB-A ports.

A USB device that is plugged it is supposed to limit itself to 100 mA (150 mA with USB 3.x) until "enumerated" by the host. After enumeration come a possibility to ask for more power in larger increments which may or may not be allowed because of a hub or other devices taking power. Depending on the spec followed this might mean 900 mA or 1.5 amps allow.

This changed at some point with USB-BC. USB-BC allows for two power levels for unenumerated or enumerated devices, 5 watts or 12 watts. There's older pre-USB-BC that allowed for levels in between, like 9 or 10 watts but these fell out of disuse. There's non-USB standards that will provide 18 volts, meaning non-USB compliant devices to use this power, otherwise it's just another 5 watt worthless supply. It looks like USB-BC is getting slowly replaced by the more popular parts of USB-BC being incorporated into USB 2.0, USB 3.x, USB4, and USB-PD. The biggest "jump" being USB devices can expect 1.5A power without all the previous power query steps from USB before.

Such "odd ball" chargers you find will provide only 5 watts to anything else it is plugged into. USB 2.0 and USB 3.0 ports on computers have been able to provide 1.5 amps for some time now, at least ten years given how my Apple SuperDrive draws 1.5 amps from a USB 2.0 port and it was made in 2010.

Thunderbolt requires 15 watts, or 5 volt @ 2.4 amp out after the USB-C to USB-A adapter takes it's bit of power. Us that instead of the USB-BC port, if one is not enough.

Not the answer you're looking for? Browse other questions tagged usb .

5
Create a LAN between Mac Mini and two MacBooks without internet
18
What Thunderbolt to USB 3.0 cables/adapters exist for OS X and Mac hardware?
3
Will there be a USB-C to thunderbolt 2 adaptor? I only need data transfer to be higher then USB 3.0
36
Should I use a Thunderbolt adapter or a USB 3.0 adapter for ethernet?
13
Supported USB-C Alternate Modes on MacBook Pro (15" 2016 and later)
3
Does Thunderbolt 1 provide USB (3.0) functionality?
4
Add USB-C ports to an old 2014 iMac
1
Macbook Pro: One USB-C port only works for charging devices