Can I force AirDrop to work on High Sierra without WiFi hardware?

Note - my IMac doesn’t have a functioning WiFi card.

The workaround to this before High Sierra was released now doesn’t work for me without a Wi-Fi Card to enable AirDrop.

*additional information: My Wi-Fi Card was removed or disabled due to damage. AirDrop continued to work just fine over ethernet. The lack of a Wi-Fi Card might be what is causing AirDrop not to enable it self in High Sierra.

Is there any third-party app or system modification that performs the same functionality on 10.13?

Please note that my answer has not been updated after it was made clear that the Wi-Fi hardware had been disabled/removed.

You can add AirDrop to Finder favourites by going to Preferences->Sidebar and ticking the box next to AirDrop.

If it's missing from there, you can reset the Finder settings by deleting the following files:

EDIT: Below was in answer to the original High Sierra question, but it appears that the original question has changed when the hardware issue came to light. I am leaving the answer below posted in case others find it useful when coming across this question. The hardware should either be fixed or a third party WiFi USB dongle that supports 5GHz 802.11n or 802.11ac can be used to re-enable AirDrop.

Apple has not removed Airdrop from macOS 10.13 "High Sierra" but if one doesn't see it in the Finder Sidebar, try restoring it. 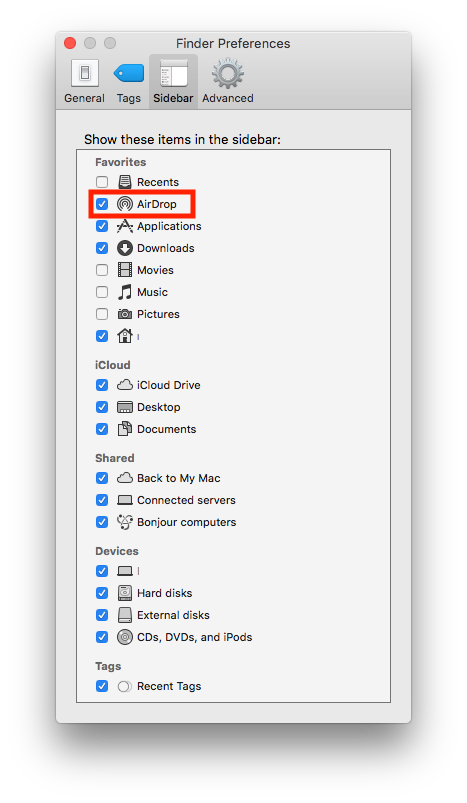 For a handful of macOS features, mostly related to graphics and wireless communications, you’ll need a system that’s slightly newer than the minimum baseline. For “Continuity” features like AirDrop and Handoff, you’ll need a Mac with both Bluetooth 4.0 and a 5GHz 802.11n or 802.11ac Wi-Fi adapter:

Not the answer you're looking for? Browse other questions tagged software-recommendation high-sierra airdrop .

12
How can AirDrop be disabled?
3
How does Airdrop work under the hood
3
AirDrop doesnt work on Macbook Air 2012 and iPhone 6S
1
AirDrop between WiFi networks
5
clipboard not working after Security Update
5
Does Microsoft Office 2011 work in High Sierra?
1
AirDrop over Access Point BLE/WiFi Mesh
3
Force airdrop images to be JPEG not HEIC