How do I find out which folder an app is in in iOS 11?

This feature seems to have been removed at some point. When I search for an app under iOS 11 using Spotlight, it will find the app and let me run it, but it doesn't tell me which folder it is in.

How can I find out which folder an app is in now? 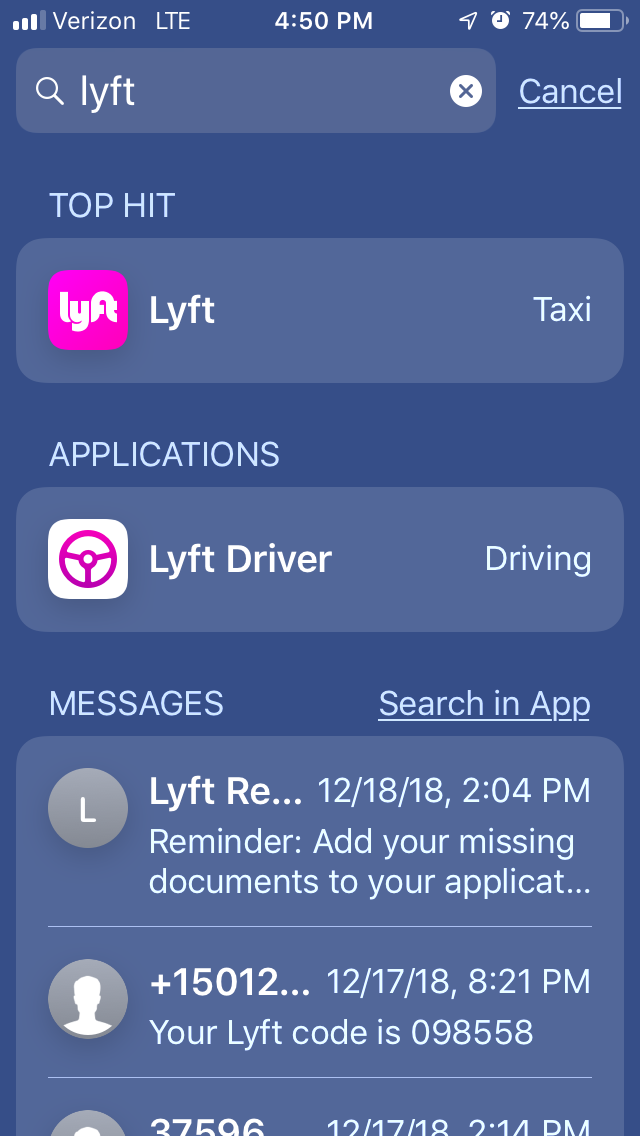 Just search for it in spotlight. If there is only 1 app result it will show the folder.

It works if you tap on it in the list of hits. E.g if I search for "Pages", tap on my top hit in the highlighted list of hits, it shows me the app, Pages and to the right is the folder name "Office" (in my case). Or "Stocks", tap the top hit, and I see the Stocks App, and it is in the indicated folder "Little Used".

There isn’t a way to do this on device with earlier iOS just tapping the interface.

I wish I could 3D Touch or force touch from Siri results to delete the apps or see the path to the folder and app. Either Apple hasn’t figured out how they want to design this experience or they believe people will either offload unused apps or use the list view to delete as a workaround.

The only other avenue to remove without locating an app is to search for apps in the storage section of the settings app and delete apps without using the springboard interface.

If you just want to launch the app, try Siri or perhaps a utility like workflow to open it procedurally or from the suggested area.

They brought it back in iOS 13. But you have to have the search be specific enough that there is only 1 app result. Otherwise it will not show the folder.

Often Apple Configurator 2 is good at doing such things, when you are able to connect your iPhone to a Mac.

After connecting and selecting your device there are several actions provided in the menu. One of them is "Modify" -> "Home Screen Layout". You still have to browse all the apps to find the one you are looking for. At least you can do it on a big screen and after opening a folder you can see all pages at the same time.

I know the pain. I've got almost 600 apps installed.

The most difficult task on the phone for me is how to delete an app that I know the name of. This can be done quite easily by selecting "Actions" -> "Remove" -> "App..." and entering the name.

2
How do I locate an app on the iPhone spring board / home screen?

5
Are there any other iOS apps other than Mail which can send email?
2
How to disable iOS FaceTime notification sounds?
1
Why does my iPod Touch show Spotlight differently?
3
iOS file chooser for iCloud drive can't find tags
1
Can the Apple Watch app be side loaded and used on other iOS devices?
0
How can I find an app on my iPhone?
0
Apps in iOS App Store, download old version of the app to support old iOS