I have a 2017 27" iMac with a 4.2 GHz Intel Core i7. It's been having some issues lately where every now and then the entire system will gradually freeze, forcing me to hard reboot the computer. So to see if there's a hardware issue, I started running prime95 in stress test mode to see if any errors were detected.

Is that temperature too hot, or is this normal for an iMac?

edit: After the system was idling all night the temperature went down to 45 C, which is of course a good idle temperature. So no worries there.

edit 2: After doing more research I've discovered this is a widespread issue with the Intel Core i7-7700k, and affects all iMacs that have it. Apparently Intel claims its temperature spiking to 90 C during normal use and hitting 100 C during heavy use is normal. Seems wrong to me, but who am I to argue with Intel?

Reaching a temp of 95°C is not surprising if the CPU is under heavy load for a prolonged period.

Prime95 can be useful for determining stability, but I'm not particularly a fan of it as a troubleshooting/diagnostic tool. The reason it's popular for stability testing is because users will overclock their CPUs and then need a way to test how stable they are afterwards. So, for me, prime95 is the wrong tool for the job you're trying to perform (but that's a personal opinion). However, if you're wanting to use it, then you need to run it for at least 3hrs. If your iMac continues to run it without error, then it's passed the test.

If you're particularly concerned about your hardware, I'd start with using Apple Diagnostics to test your machine.

Note: If pressing and holding the D key at Step 3 doesn't work, start again at Step 1 and, at Step 3 press and hold both the OptionD keys instead. This will try and run diagnostics from the internet instead, so you will need to allow more time for it to complete.

Assuming the iMac passes this without error, I'd be more inclined to test your hardware in Safe Mode to see if you can recreate the issues you're having. If you can't, then you know it's most likely a software issue relating to a login item, corrupted font, or kernel extension.

For more info on Safe Mode, refer to: Use safe mode to isolate issues with your Mac.

The 4 cores' DTS temperature readings very rapidly reach their design maximum of 99 degrees C under full load. I mean within a few seconds. Then the CPU frequency automatically throttles back to prevent overheating. Because of this, I don't believe I am getting the full performance that this CPU is capable of (benchmark results are way below the same CPU's typical performance in a PC or Hackintosh). I think the iMac has completely inadequate cooling for these very high performance CPUs to run at full speed.

The following image shows the iStatMenus sensor list when my CPU is fully loaded on all 8 virtual cores. Of particular relevance are the "CPU Core (1/2/3/4) - DTS", which are all varying between 98-100C, the overall "CPU Cores" figure at 99C (I believe this is the one used to decide when to throttle back the overall frequency to keep it under 100C), and the Fan which is running at full speed. 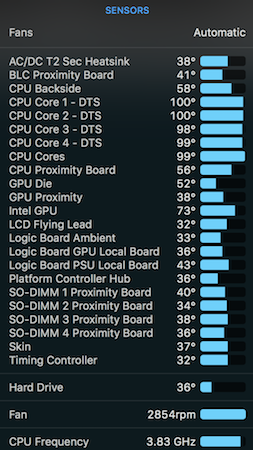 And here is Intel's own Power Gadget software showing how rapidly the temperature rises after the onset of load, followed shortly afterwards by the frequency being reduced to about 3.8GHz and remaining there. 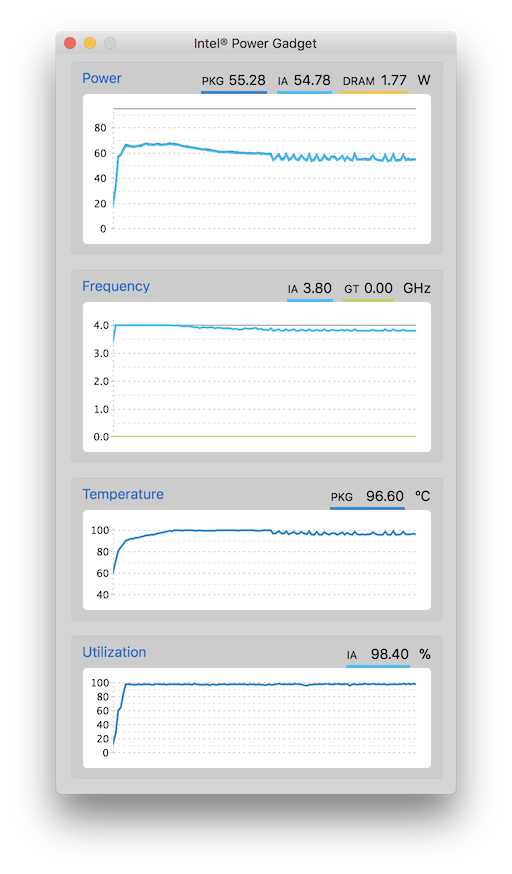 In conclusion: Yes, it is normal for an iMac, but it's not ideal. These high-end i7s produce a lot of heat, and the iMac simply can't get rid of it fast enough. IMO it's disingenuous of Apple to sell iMacs with CPUs that they claim can run at 4+ GHz when in fact they can't for more than a few seconds because the cooling is inadequate.

On the matter of why your Mac is slowing down, I highly recommend full-time use of an on-screen sensor program such as iStatMenus. It enables you to keep an eye on what your Mac is doing at all times, and quickly identify the cause of any slowdown - often these can be due to I/O load rather than CPU.

95° under load is reasonable given a few characteristics.

This app works great. You can set two temp points to keep your processor between the two ranges and avoid system throttling. You'd be surprised how ramping the fans up can improve temps and performance! Apple sides with less noise over performance. https://www.crystalidea.com/macs-fan-control

Not the answer you're looking for? Browse other questions tagged imac hardware cpu temperature .

0
Is 110 degrees fahrenheit on average bad on a 2019 MacBook Air? (And other problems)
2
Are these normal temperatures?
2
What are safe CPU temperatures ranges under heavy load in the unibody Macbook Pro?