High Sierra upgrade does nothing at all when opened

I downloaded the High Sierra upgrade a few weeks ago and have tried to launch it now and then since, but it does nothing. Not even report an error. 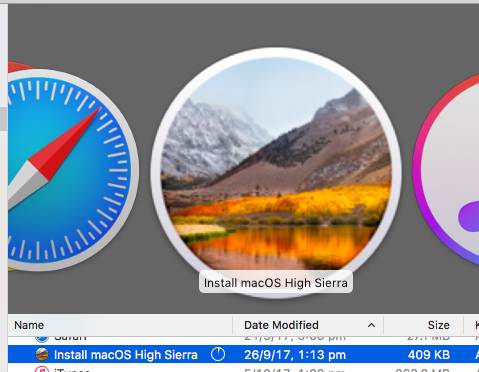 It does seem to start. I'm pretty sure I can see it when I run top in a terminal.

It doesn't have an SSD, just a USB 3 external hard drive. But this didn't stop the last few OS upgrades from working.

I can't seem to find this specific problem mentioned anywhere on the net when I Google for it.

Is this actually a known problem with a solution?

I thought I should try to run it from the terminal and see if it outputs an error there. But it is not a regular executable file. It is some kind of magical directory in fact that is associated with the App Store. So I don't know of a way to launch it from the terminal. Doubleclicking on it does something in the background using the App Store, since the App Store does not open or tell me anything.

Depending on when you downloaded the installer precisely, this answer may provide a clearer reason for the issue.

Then let me know how you get on with the install. This would be the only logical reason for it not working on a supported / compatible system.

Not the answer you're looking for? Browse other questions tagged macos macbook-pro upgrade high-sierra .