How to completely block specific Wi-Fi SSID on macOS?

I'm looking for a way to totally blacklist a Wi-Fi network (by SSID) in macOS.

And no, I promise you that I really (truly!) do not need to just have the computer "forget it" by removing it from the network list. I need to completely and totally prevent the computer from connecting to a certain network entirely.

It's super, crazy easy on Windows. Is there any way to do this on a Mac?

Restrict to Admins Only

The caveat here is that the user can no longer be an admin.

Your second option is to have a terminal command run periodically:

You could put this is a simple bash script

then use cron or launchd (preferred) to run it periodically. The caveat is that while they may join the network, it will eventually (per your schedule) delete it.

You have to run this as root (meaning put in /Library/LaunchDaemons if using launchd) otherwise it will ask you for a password every time.

What the script is doing

I've just tested this and it works!

You need the app Apple Congifurator 2, it's on the App Store, made by Apple.

Create a new profile, in the wifi section create a new payload. Fill out the information, including the correct security type. Set the password to something wrong. Uncheck the 'Auto Join' option.

Now, why does this work? The profile sets settings which cannot be changed by the user and so if you configure it with a password the user will not be able to uninstall the profile. Since you have configured the wrong password for the profile, the computer won't be able to connect to the network and will show an incorrect password popup. That's where the "auto join" setting comes in. By configuring the device to not automatically join that network, the device will only attempt to connect to it when the user selects it out of the menu. Since the user can't change the stored password they won't be given the option to try a new password and so won't be able to connect. With auto join off, you also won't get tons of "incorrect password" errors on the device any time the network is in range since it won't bother to connect to it. 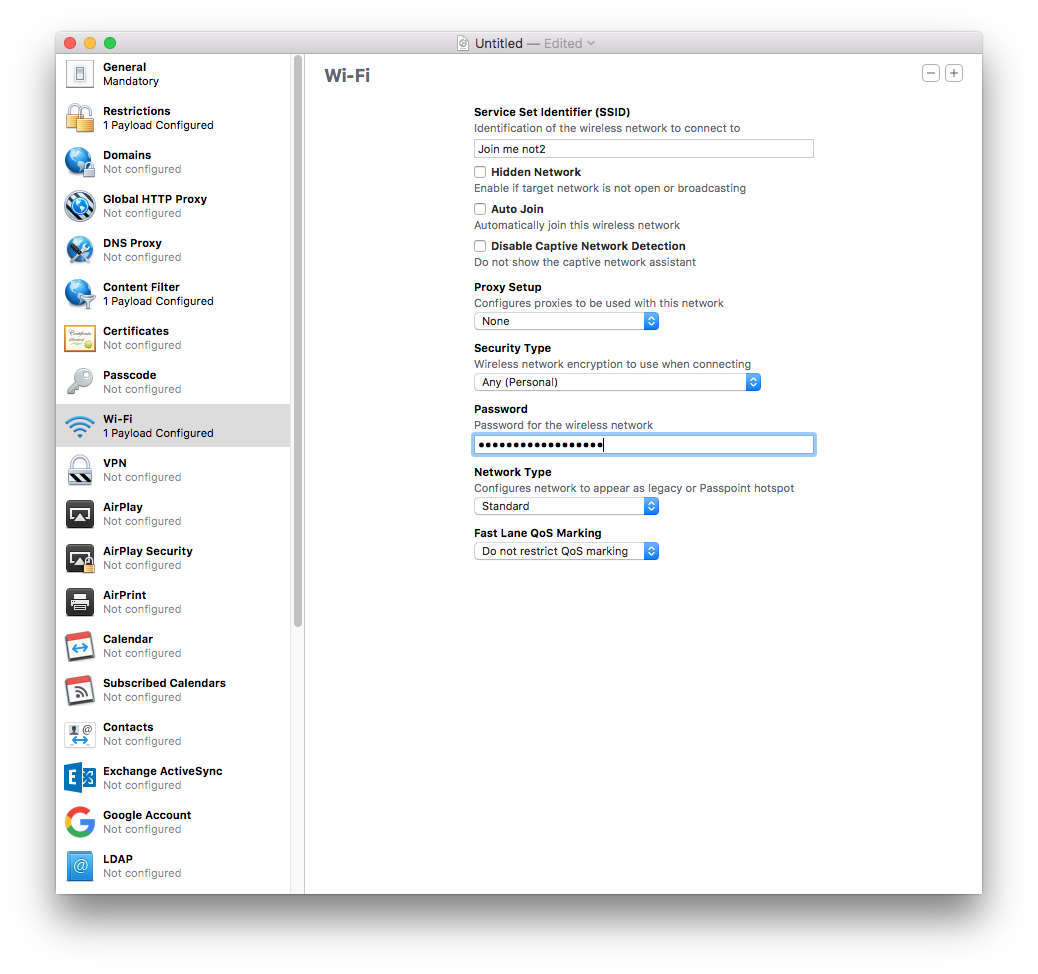 I have no experience but what I would try: setup a new acccount, give it administrator rights, login in this new account, go to SystemPreferences, ParentalControls: in there set parental controls for your main account, set the access to ...aruba... as forbidden.

6
launchd plist format for running a command at a specific time on a weekday
1
How can I prevent users on Mac from connecting to any WiFi networks and only connect to white-listed networks?
1
Limit - not disable - Remember joined Wi-Fi locations
0
What's the terminal equivalent of Windows' netsh wlan add filter?

8
How do I completely disable automatic keyboard backlighting on Macbook Pro with OSX Lion?
5
MacBook connecting to wrong network?
5
How do I prevent OS X 10.8 from autoconnecting to a specific wireless network?
5
How can I cut off/block all traffic when I lock the screen (and resume when unlocking) in MacOS?
0
Photos not synching, macOS 'optimize storage' not working, and 175GB of photos downloaded for no reason
1
How can I prevent users on Mac from connecting to any WiFi networks and only connect to white-listed networks?