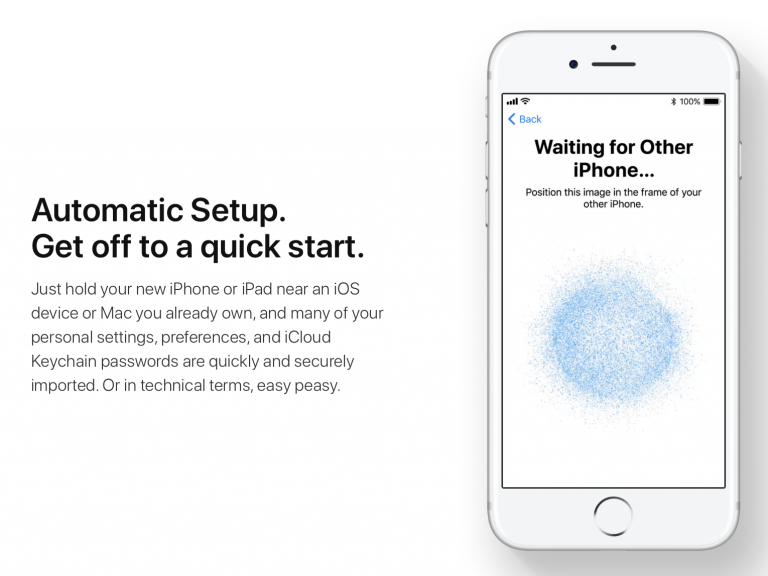 During the setup of a new iPhone 8 / iPhone 8 Plus / iPhone X, there is a step for migrating the settings from another iOS 11 device.

On the old device, it says:

Use your Apple ID "xxx@xxx.com" to set up your new iPhone.

On the new device, it says:

If you have an iPhone or iPad running iOS 11, bring it nearby to sign in automatically.

If you want, you can also set up this iPhone manually.

Hold Your New iPhone Up to the Camera

Position the pattern in the circle

On the new device, it says:

Waiting for Other iPhone...

Position this image in the frame of your other iPhone.

A pattern of moving blue dots appears in the new device, as shown in this picture:

And in this video:

I believe it works like QR code, but it is not. Does anybody know what the name of this technology is?

The technology can be thought of very much like an animated QR-code. The main principle of data encoding is very much like QR-codes, but obviously with the difference that as time goes forward, the displayed data changes as an animation.

In addition there seems to be the use of a neat trick with two different colors shown in quick alternation, which makes it possible for Apple to "hide" or make less obvious the clues that are used for the receiver of the data to synchronize with the signal (i.e. figure out where the boundaries of the encoded data is).

With a traditional QR code these sync markers are much more evident as they are big black square boxes with white borders that are set different places in the code to make it easy for the receiver to figure out what's encoded data, and what's not part of the code.

Much more details are available in these two patent applications by Apple:

I skimmed the patents linked above and here’s my naive interpretation of the technology. It’s essentially a finely detailed QR code, or similar, but rather than using coloured squares, the information is encoded by rapidly alternating complimentary colours such that the human eye doesn’t notice. This also allows higher information density by allowing the subtleties of the particular alternating colours chosen to encode additional degrees of freedom. Neither the rounded density distribution nor the wandering, orbiting movement of the particles is mentioned in the patent, it might be just for aesthetics which would be an Apple thing to do. What is mentioned is that this code can be embedded into a background image (and presumably an animation), without the image appearing different to the human eye. I wonder how much of the spherical orbiting “galaxy” shape is just smoke and mirrors to give you something to point your camera at while the real magic happens invisibly? We need someone to film the code up close, with a high speed camera - the patent mentions a flicker rate of 60hz so any footage above 120fps should do the trick.

Automatic Setup is Apple's proximity-based process for transferring data, settings, and content from an old device to a new one. You can use Automatic Setup on your iPhone, Apple Watch, or Apple TV.

Apple's Automatic Setup feature began as an easier way for users to set up the Apple TV with "tap-to-set-up," which let you use your iPhone's sensors to quickly connect to your Apple TV and automatically enter in data like an Apple ID and Wi-Fi network. Since then, the feature has evolved and expanded to cover not only the Apple TV, but new iPhone, iPad, and Apple Watch models as well.

Automatic Setup is great because it lets users skip much of the form-filling present in older versions of setting up new devices — you shouldn't have to manually enter Wi-Fi network names and passwords, Apple IDs, or settings from previous devices. It's also proximity-based, keeping that data secure by requiring you to physically have both old and new devices in the same location.

Apple uses a slightly different method to automatically set up each device, depending on whether it's an iPhone or iPad, Apple Watch, or Apple TV.

Visit this site for how different devices are setup.

Not the answer you're looking for? Browse other questions tagged settings migration ios setup setup-assistant .

13
How do I tell an iOS device there's no internet connection on the Wifi?
4
Can you make iTunes forget a device?
3
Restoring a new iPhone via iCloud post-setup?
0
Since upgrade to iOS my phone does not remember position in audiobooks
18
What are the blue dots next to App names in iOS and macOS?
1
Google Play Music on Alarm
1
iPhone 6 & iOS 9 - ad hoc app will not install
1
What data can only be migrated to a new iOS device using backup and restore?
4
Transfer FreeOTP secrets to new device using iOS 11 Automatic Setup
0
Does disabling the prompt to enable two-factor authentication on an iOS device disable future prompts from appearing?