I want to type romanized Mandarin Chinese in Pinyin spelling system, attached to Chinese character texts. Are there any direct input method to type roman characters with full diacritics (without converting to Chinese characters, and not deviating to symbol-insertion methods using ctrl and alt keys)?
E.g. 明月千里寄相思
míng yuè qiān lii jì xiāng sī
tone 3 on "i" should be "i" ripped off with its upper dot and replaced by a hacek, but I don't know how to get that single pre-composed letter from the usual English keyboard.
My second best compromises are:
1. using doubled vowel letter to show its being in the third tone as shown above (orthographically a odd-ball) ; or
2. shifting to Gwoyeu Romatzyh, like MING YUEH CHIAN-LII JIH SHIANGSY.
When I was using GlobalWriter on windows machines, I used to switch the keyboard to IPA input layout and type directly macron/acute/hacek/grave + vowel letter to get appropriate tone-marked vowel letters. All the needed diacritics were allocated the top row of keyboard, as "dead keys" to be followed by vowel letters on which they are added to.

Any similar shortcuts in iPad circumstances?
Thank you.

On the standard Chinese Simplified - Pinyin keyboard on the iPad, if you hold down a letter key for about 1 second, it will popup a panel with the 4 diacritics for that letter, letting you pick between them.

If you type pinyin with diacritic marks, it will not transform the pinyin into actual Chinese characters. 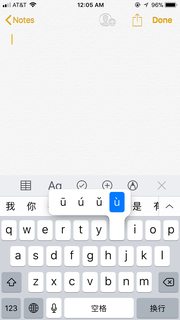 Not the answer you're looking for? Browse other questions tagged keyboard .

2
How to input accented characters to an OS running in a VM?
1
How to type numbers while using pinyin input on a non-qwerty keyboard?
1
Typing Pinyin with tone marks doesn't work
2
Using pinyin with tones to input Chinese characters
2
How to type in the redundant symbols in Simplified Chinese keyboard layout on MacBook?
0
How to type in Chinese pinyin tones on Dvorak keyboard on macOS?
2
How can I type ` character when using Chinese input source?
1
How to make Chinese pinyin keyboard work in vim?