Problem with creating hotspot on macOS

I have a question regarding the setup of a hotspot on my Mac. I have a wired ethernet connection, which I connect to the computer. I would then like to be able to connect to that same connection (and the LAN) on my iPhone over wifi. I followed the steps here (https://www.maketecheasier.com/create-wifi-hotspot-using-mac-os-x/) which worked, however, there is a problem. Whenever I do this, the Macbook acts as a router, not allowing me to access any devices on the original LAN the Mac is connected to. I would instead prefer if it acted more like an AP, allowing communication to flow between my iPhone and everything on the LAN.

EDIT: To clarify, the important thing here is that I can't access any devices that are already present on my LAN. I have an IKEA Tradfri hub connected via ethernet to my router. Also connected to my router is a powerline adapter. The second powerline adapter is connected to the Macbook I was talking about. So now, when I connect to the Macbook's wifi, I can't access the hub. (This is, however, possible from the Macbook - I checked via a ping request, there is no app available for mac as far as I know.) My Macbook is therefore acting as a router, where the ethernet cable is plugged in to the port which says Internet. I need it to act like an AP or a router where the ethernet cable is plugged in to a normal LAN port. I hope this clarifies the difference. Thanks again! 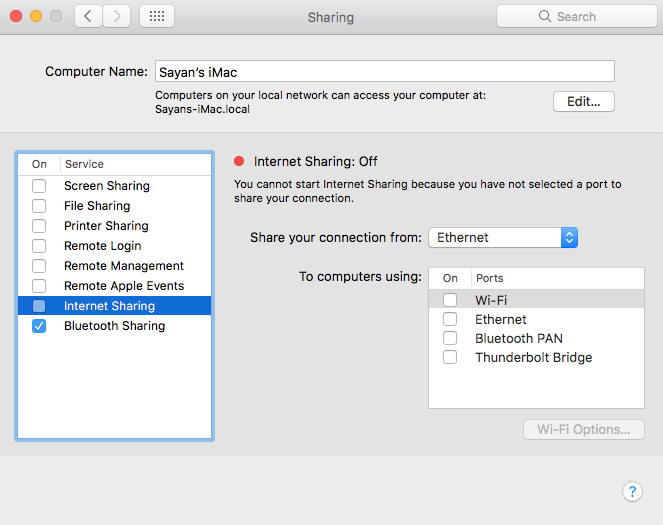 2
Creating a wifi hotspot on OSX with a connected USB wifi adapter instead of airport (OSX Lion)
3
Plugging iPad into computer turns on Personal Hotspot with one connection
1
AppleTV and other Apple devices connecting by wifi but not by LAN
4
How to make MacBook automatically connect to different wifi networks as desired?
0
Use Mac connected to cable router (no WAN) as the Gateway of the LAN
1
Not able to remote desktop from my mac to windows from iphone hotspot
0
How to connect to wifi while connected to a device through thunderbolt bridge
0
Sharing Macbook's WiFi connection to other device via wired connection