My finalcut pro trial expired before I could export the movie I was working on. How can I import it into imovie?

I wouldn't buy a new software just to do that task, so I can think in another way to achieve your goal. Send the project to someone who does have Final Cut Pro. There are always someone willing to help in a Editing Forum. It doesn't matter if the person does not have your media files, as long as he/she exports a XML file from your project, which in 99% of the time is a very little file (both the project and the resulting XML). Get that XML back and than use that file to import your timelines and connect all your media into iMovie or another decent software like Premiere or Vegas.

Plus you can use this workaround to get accurate results:
http://alex4d.com/notes/item/import-final-cut-pro-x-projects-into-imovie

Editor and plugin maker Andy Mees has discovered that you can import Final Cut Pro X exported XML into the new version of iMovie. Here you can see the source timeline in Final Cut. It was exported as an .fcpxml file and imported into iMovie. 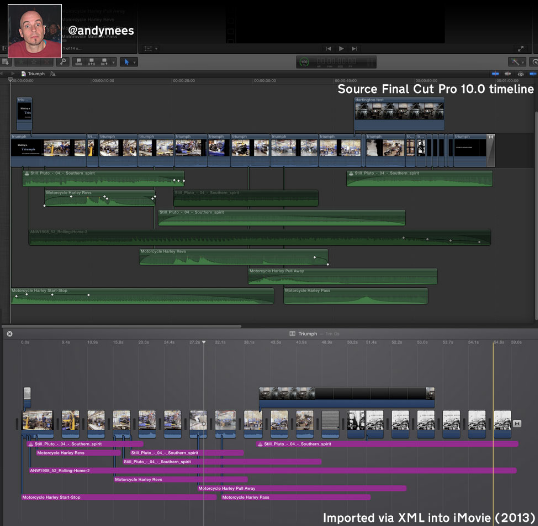 The reason why the timelines don’t match up is because iMovie timelines have variable scale. Although the faint grey vertical lines are equally spaced, the times they mark aren’t equally spaced (in this case some are marked as denoting 9.4, 10.9, 15.8, 20.3, 24.4, 27.2 and 32.1 seconds).

iMovie doesn’t implement all Final Cut Pro X features such as multiple connected video clips at the same time or auditions. Despite this, you can see iMovie displays an audition icon on one of the audio clips in Andy’s timeline. If you attempt to edit the audition in iMovie, you’ll see an imcomplete UI: 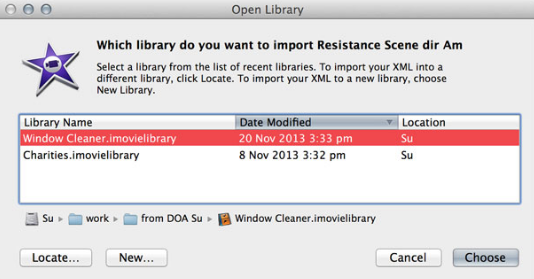 As well as reading his blog, keep up with Andy by following him on Twitter.

Unfortunately, there is no way to import Final Cut projects into iMovie.

Attempting to open the Final Cut project file into iMovie will fail because it uses a different file format. There is also no way to convert this into a format iMovie will read because Final Cut has many more features and options that will not translate to iMovie.

If you still can, your best bet would be to export whatever you have in Final Cut as single video file and import that into iMovie. You will no longer have the ability to edit the composition of that clip or any effects that have been applied it to it, but it's your best bet unless you don't mind starting from scratch.

Not the answer you're looking for? Browse other questions tagged imovie final-cut-pro .

5
What's the best way to import DVD into iMovie 11?
3
Can I use iMovie to edit a .mov file without altering the aspect ratio?
3
Can Apple Motion export with alpha to bring into iMovie?
0
Import multiple photos from Dropbox to iMovie?
0
Can't Import iMovie to Final Cut Pro X on Mavericks
0
How do i get project files back into imovie?
1
IMovie error -50
0
Export an iMovie project to QuickTime to import into another iMovie project
1
Why is "Send Movie to Final Cut Pro" completely missing from iMovie 10.1.3?