Correct Sierra 10.12.5 file paths to Spotlight and SpotlightNetHelper files to be blocked with Little Snitch?

The article belowmentions using LittleSnitch for blocking Spotlight and SpotlightNetHelper:

It includes two screenshots. The first image shows two separate paths, which are dived by an arrow, to the correct files to block while the second image shows one path. 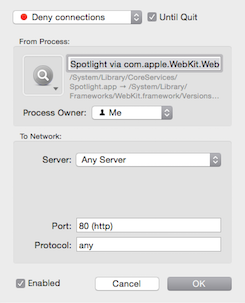 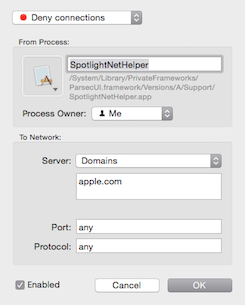 What are the correct paths to use for Sierra 10.12.5 as these apparently can't be found via searches:

I was able to find the first path on the first window:

The second path is cut off on the first window and can't be determined.

The path listed in the second can be found until the point I get to the "A" folder, but the last bit "/Support/SpotlightNetHelper.App" can't be navigated to.

There are various apps and processes which use this for networking, so you can't simply block it entirely without affecting those too. However you can set up a specific rule to prevent it connecting to Apple's services for Spotlight, which would prevent Spotlight using it to talk out, as shown in the first screenshot where the rule is ‘Spotlight via com.apple.WebKit.Networking’.

Not the answer you're looking for? Browse other questions tagged finder spotlight path .

2
OS X Lion - Please help me understand Finder "Find"
0
How to display the location of files with Spotlight?
0
"open with" and Spotlight cluttered with different versions of files/apps
7
Spotlight "Indexing and searching disabled." message in terminal on OSX. Why?
3
How display file path at bottom in "All My Files" on Sierra 10.12.3?
5
Locate long file paths on external drive with terminal
4
AppleScript: How to create a new Finder window for a folder that is already open?
2
Spotlight Search: Show ALL FILES, and exclude ALL FOLDERS