What are the advantages and or disadvantages of calling Handlers from a Library Script with “use Statements“ vs. the “Load Script” command?

In the first scenario, I have a script containing all of my handlers and snippets. The filename for this script is “Jimz_Handlerz.scpt” and it is located here… /Users/Smokestack/Library/Script Libraries

Calling the handler from a new AppleScript file requires me to declare my script library (line 1) and then I can call the handler at anytime I want with the second line. Like this:

In this next scenario, I am using the “load script” command to load the exact same file as the first example but this file is located on the desktop

This is the actual handler containing the command I am calling from both different scenarios..

So I guess my question is, are there situations I would rather use scenario one and other situations where scenario two would be better?

Here is a cool little tidbit of information: Using the scenario of calling handlers from a script library script or script bundle file as in the first example of my original question.. If the current script, that we are calling on an external script from a library, is a script bundle and we include a folder inside the “Resources” folder called “Script Libraries” containing the script or script bundle we are calling our external handlers from, if the file in the system “Script Libraries” folder cannot be found, then this script will not throw an error because it searches the resources folder also for script libraries. 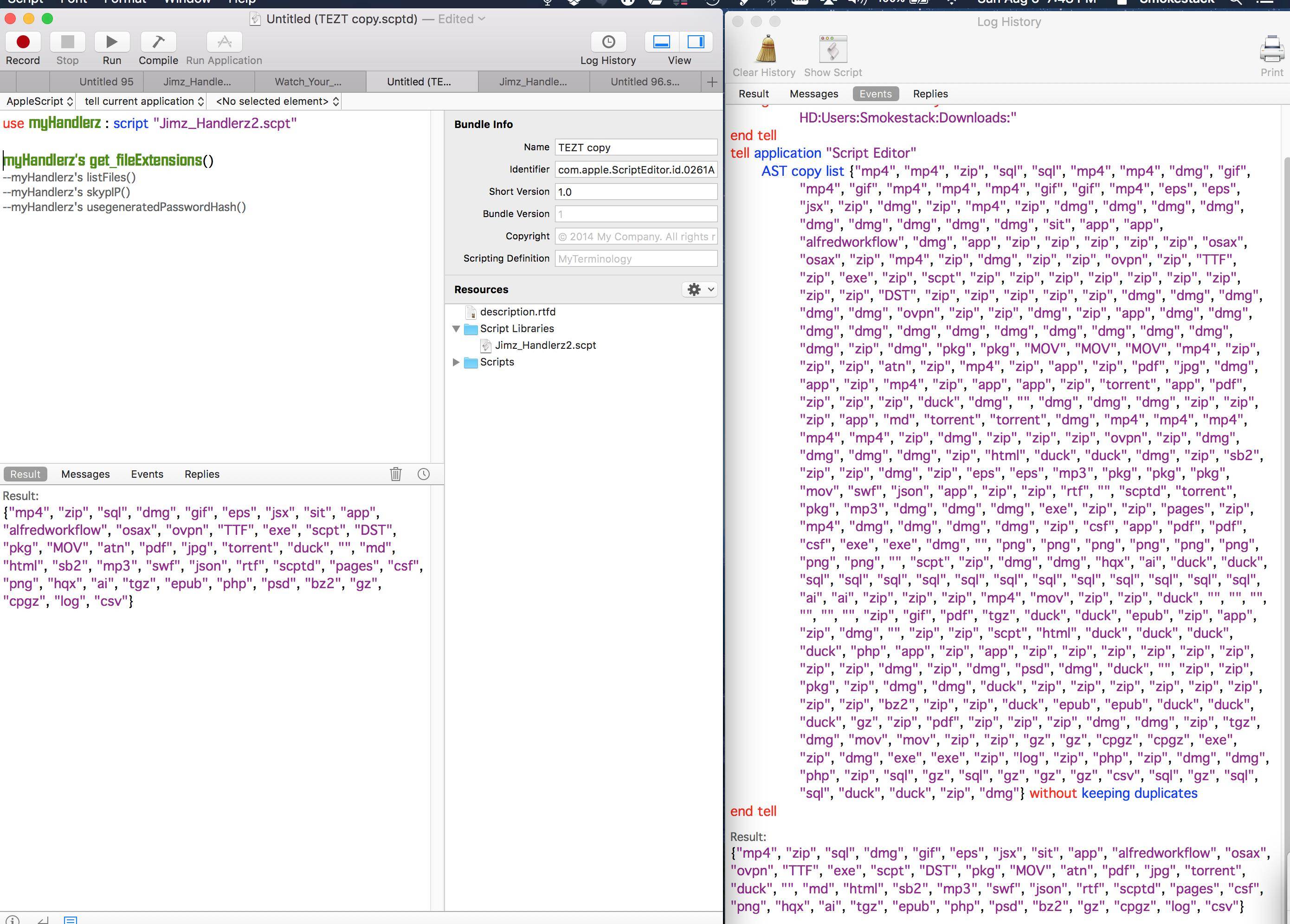 I have added a “script logger” to the beginning of every one of my scripts, which basically writes to file…. The script name and the time and date it was last run.

This following code, which is located in the file “Jimz_Handlerz.scptd”, is the script object which handles the logging

There are two ways of which I can run the commands within that script object, from any other script file.

OPTION 2 Using the "use" option inserted at the top of any other script file. Because "Jimz_Handlerz.scptd" is located in my script libraries folder, I do not need to define its location

In regards to the question in my original post…

if I use option 1, the script logger will log which script I ran along with the time and date.

However, if I use option 2, the script logger will log "Jimz_Handlerz.scptd" as the script running the code.

In short, in this scenario, it would be best to use option 1

3
LaunchBar script that returns the path of a folder "dropped" on it
0
Drag and drop from iPhoto may remove the pictures from iPhoto Library, how to recover it?
2
Check for Existence of File then Move Rename Old File and Move New One
1
AppleScript: move a folder to library (to root) in iTunes
4
AppleScript do shell will not work on Application Support directory
2
AppleScript checking if folder exists causes “AppleEvent handler failed” error -10000
1
Applescript - opening file inside app bundle
0
Automator Change to directory of dropped files before running Shell command
1
Batch Removal of "Where from" Metadata Without a Handler