My dad was running macOS & Windows on his Early 2015 MacBook Air, and both crashed. Apple’s service center said the only option was to reinstall macOS.

Using the Windows Command Prompt I backed up as much data as I could. Then I tried to reinstall Sierra, but couldn’t boot into the Recovery Partition. Internet Recovery never worked (at best it progressed to 10% then stopped).

So I deleted all my partitions and downloaded a Sierra image from someone who put it in Google Drive. I don’t know what I did wrong but it turned my hard drive into an “OS X Base System.” 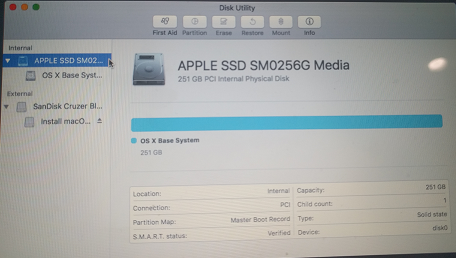 Now when I start the Mac normally it tries to resume the macOS installation, but fails because the HDD contains an “OS Installation Media.”

Then I got my hands on a friend’s Mac that I used to Create a bootable installer for macOS. I now have the USB boot drive, but I cannot boot to it (it shows the Apple logo and then “No Entry”). Trying to boot to the regular HDD also shows “No Entry.”

I would appreciate any help reinstalling my Mac cleanly.

Here's a guide to get you going again.

Not sure if your question needs to be closed as too broad / too much 20 questions - technical support, but following Apple's erase and install process should fix this at the cost of any data you still have on that drive.

Not the answer you're looking for? Browse other questions tagged macos hard-drive boot partition .