I have impatiently updated my Mac to the High Sierra Public Beta and I noticed something strange when I was trying to mess with my external hard drive. I have a 4TB WD MyPassport for Mac and I was planning on partitioning it so I could have half of it to use as a Time Machine and the other half for storage. So, I naturally thought I would reformat the drive as APFS and then partition it so everything is in the same format as my internal hard drive. However, once it was in the APFS format and in the partition drop-down, everything was grayed out from the plus/minus buttons to the resize text box. Down below where they normally display the errors it only said that "This volume cannot be resized." I did also run into the issue where I thought that I would just reformat it back to Mac OS Extended (Journaled) (AKA: JHFS+). In the drop-down for the Erase menu, I was only given the four APFS options as the format. So, being the hard-head I am, I went into terminal and used the "diskutil eraseDisk" option to reformat it to JHFS+, which worked. From there I was able to partition it off and reformat one volume to APFS for Time Machine and use the other for extra storage. What I learned after setting up Time Machine, is that it actually needs to be in the JHFS+ format to work. TL;DR So, I guess my question ends up being: does anyone know why I can't partition a drive that is in APFS format? And why does Time Machine use JHFS+ format if the new native format is APFS? As far as the first question, is it just me or maybe because High Sierra is in Beta and it's just something that hasn't been fixed? And for the second, also maybe because it's in Beta and it's just something that hasn't been updated?

Thank you for everyone's time reading this, I know it was kind of a long one. 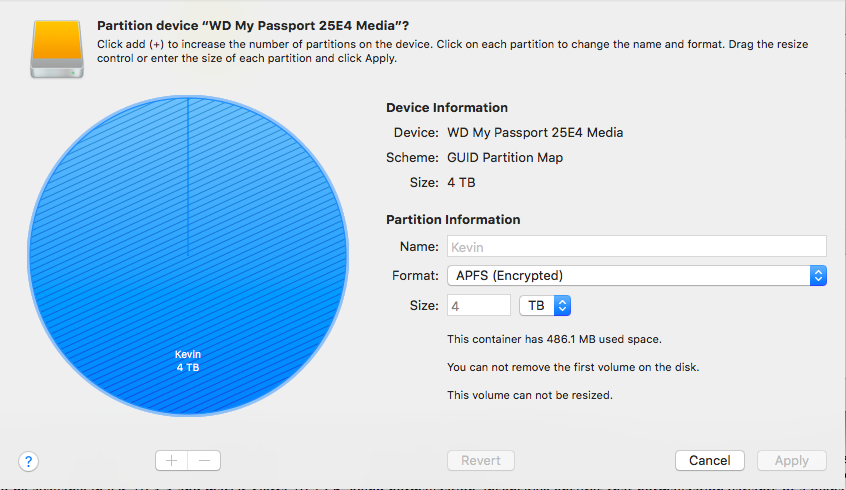 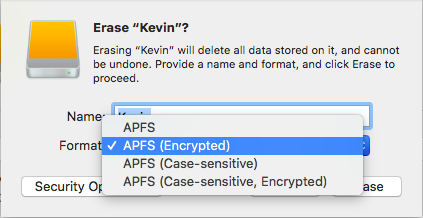 I'm no APFS expert but my understanding is that once the whole HD is formatted as APFS it becomes a "container" that can hold multiple volumes. You can add volumes (partitions) to the container but they all share the entire space of the container and resize themselves dynamically. Therefore there is no option to resize a partition or volume in disk utility. The file system takes care of it automatically.

I haven't figured out why it wouldn't let me partition my drive formatted as APFS, but I am assuming it is because of beta bugs. I am able to do it now so that's the only logical answer. As far as Time Machine goes, I noticed that it was requiring me to format the drive as OS X Journaled even though the original is APFS... It doesn't really make sense to me but I'm not an expert. So, for Time Machine, it still needs to be OS X Journaled; and for partitioning it appears to be fixed. Thanks for everyone's time on this question.