iMac restarts instead of shutting down

I have a problem with my iMac restarting when it should be shutting down. This doesn't happen all the time but appears to happen more frequently when I've had the computer on for a few hours.

It doesn't behave like this Mac OS X never shuts down. The Mac responds to being shut down immediately.

First I should state I've pulled out all USBs etc. The only wire in is the power cable.

I've been in touch with Apple Support about this issue, and the only advice they could give was to run First Aid in the Disk Utility. Sometimes this allows me to shut down. Other times not.

I've reset the SMC which doesn't help. This often leads to another issue which is freezing on reboot (Apple logo and progress bar that doesn't move). To fix this I reset the PRAM/VRAM

Resetting the PRAM allows me to shut down most of the time. Even then I have to do it 2 or 3 times before it works.

I've also reinstalled the system twice, one time upgrading from El Capitan to Sierra. This has temporarily fixed the issue, but it soon comes back after a week or so. 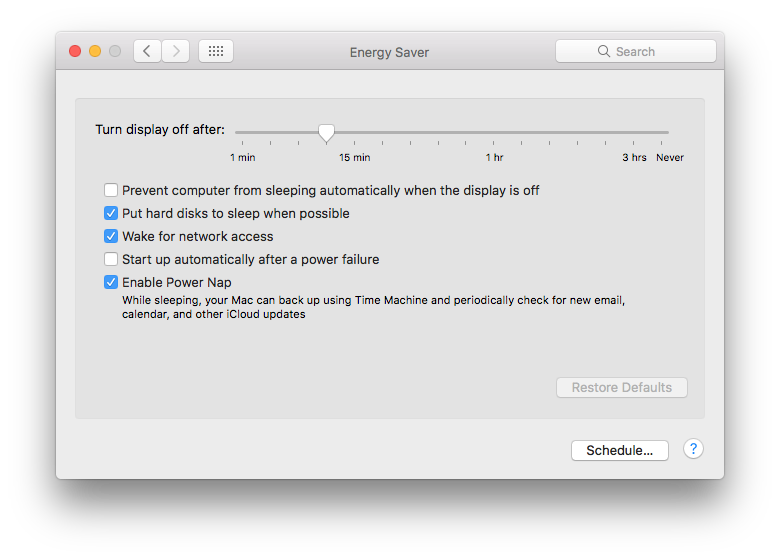 I'd really appreciate your help here guys, this has been going on a while and it's becoming a bit of a nuisance.

EDIT: This question appears to highlight a pretty common occurrence. I'm happy to invest more into the bounty to get an answer that resolves or at least identifies the problem causing it to happen.

After going through the steps in the answer provided by @monomeeth, Apple Diagnostics uncovered an error NDT001: There may be an issue with the Thunderbolt hardware. I've run Diagnostics before, but this time I ran it straight after the Mac restarted from a failed shut down. I'll be taking it into Apple for repair, so I'll keep this answer up to date with the outcome.

Troubleshooting is a process of elimination and you seem to have started off well, doing most of the obvious first steps. Below are some additional steps I'd try next, especially since reinstalling macOS only resolved the problem for a week or so.

Test your iMac in Safe Mode

Follow these steps to boot your iMac into Safe Mode:

Now, depending on the above testing, we can narrow down how to proceed:

Note: If pressing and holding the D key at Step 3 doesn't work, start again at Step 1 and, at Step 3 press and hold both the OptionD keys instead. This will try and run diagnostics from the internet instead, so you will need to allow more time for it to complete.

Now your Mac will boot up without those login items loading. Test this and see if the problem persists:

Fonts:- You can remove any of the fonts you've installed yourself to see if this makes a difference.

Kernel Extensions:- You can open Terminal (found within your Utilites folder) and enter the following command:

The above command will list 3rd party kernel extensions (you may need to stretch the Terminal window so it's easier to read). Look for anything you don't remember installing, or something that belongs to software you've removed, or just anything that looks out of place. Remember though, this is a list of 3rd party kernel extensions and therefore any of them could be causing the problem.

Not the answer you're looking for? Browse other questions tagged boot shutdown nvram .