When I upgraded to the new iOS 5 last week, I noticed that iTunes made a backup before installing, and then did a "restore". I realized that a lot of events in my iCal were missing, and so I tried doing a restore. I didn't realize that this restore was from when I first synced the phone over a year ago!, and that I am missing all of my photos and videos. Now, when I try to find a backup from last week, I can't. I looked in the Library/Application Data/MobileSync/Backup, but there only seems to be older backups there. (I look at the info.plist file, and it verifies that these are backups from 2010) Is there any way that I can find the backup from last week? I'm proficient in the command line. Any help is appreciated.

No. iTunes performs two different types of backups. One is used to carry over information during a major update (as in the move to iOS 4 to iOS 5). This backup is only stored and used for this brief period of time; think of it as a temporary backup to serve a singular purpose.

The other is a permanent backup that can be deployed so long as you hold onto it. These backups are listed in the iTunes preference window: 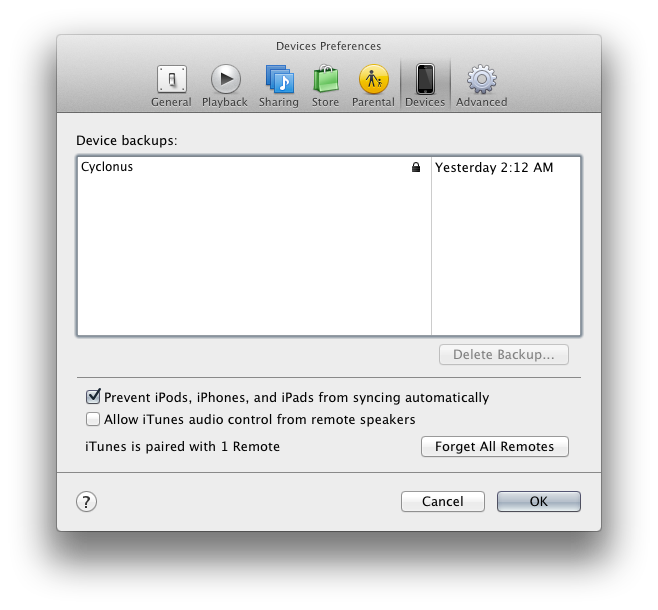 As for trying to recover the backup, there is no way to do this because frankly, there are no files to recover. Even trying to use 3rd party disk recovery utilities on permanent backups would be futile because the backups aren't stored in a singular file, but rather littered through a thousand of them, each uniquely carrying an identifier. Something a recovery suite could never effectively retrieve.

Sadly, you have lost it all. The only option would be to jailbreak and perhaps run a recovery utility on your phone's filesystem. I've never done or heard of it being done, so you would likely be in uncharted waters.

For the future, it's always a good idea to right click on your device as it's listed in the iTunes sidebar, right click and selected Backup from the context menu before any major update. Additionally, iTunes will create its own permanent backups periodically, so it's also a good idea to sync more often than you've been syncing your device.

Not the answer you're looking for? Browse other questions tagged snow-leopard mac iphone backup upgrade .