Has anyone experienced ergonomic problems with the Magic Mouse? [closed]

Want to improve this question? Update the question so it can be answered with facts and citations by editing this post.

I used a Magic Mouse for the past few months. Very soon after I started using it I developed some aching in my hand. Over time this has grown to be more or less constant, even when not using the mouse for a while. I just switched back to an old bulky Logitech mouse, and just resting my hand on it feels much better. The Magic Mouse seems way too flat to be comfortable for prolonged use.

I know this is a rather subjective question, but have other people experienced similar ergonomic problems with the Magic Mouse? Is there any study about it?

You're seeing some first indications of RSI because you're using your hand in ways you're not used to, and possibly because the mouse doesn't fit your hand.

Switching to a normal mouse is a good first aid, especially since you noticed that the problem disappeared or became less of a problem. For some people, it just takes time to get used to new movements, while others won't be able to use the new device for longer periods of time. Those unlucky people should not force themselves to use devices that aren't comfortable for them, and this might include you.

The problem with the magic mouse, IMHO, is that it's too small to really be useful as a gesture device because you're gesturing with the same hand that you use to hold it. That's bound to be awkward, which stresses your hand's anatomy, and some people develop problems from that. Others might not notice any problems -- everybody is different.

Which is why I picked up the Magic Mouse Fix. Worked excellent.

Then I got the Magic Trackpad and realized why I hate mice.

I have serious pain in the base of my thumb because of this device. I will try the trackpad and if that doesn't take care of it, I'll be switching to a Microsoft mouse.

I own a Magic Mouse but don't use it regularly. I haven't notice any aching in my hand. I know another person who suffers from RSI and uses it with his left hand instead of his right. No problem too.

I would suggest using 3M Ergonomic Mouse. It works best for me and many programmers/hackers I know. 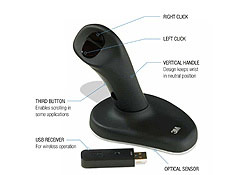 I've had a magic mouse for just over a week (as part of a new iMac) and have started feeling RSI type pain in my hand just below the fingers after prolonged use (ie., constant use for 30mins or more). I've never had any pain from the 25 years of using a normal mouse on a daily basis.

I purchased Apple Care with my new Mac and have contacted Apple about this issue today. Their response was; "This is the first we have heard of this." Despite lots of complaints on the internet about ergonomic problems of the magic mouse, apparently I am the first person to advise Apple direct of this!! Hmmm, i don't think so.

Their solution - buy a Track Pad, or buy a USB Logitech mouse.

Not the answer you're looking for? Browse other questions tagged mouse .