Does an iPhone throttle its CPU under heavy load?

I noticed some Android devices clock down after a while. So they only may perform at peak performance for a single benchmark. Is this also true for iOS devices? How do they behave under heavy load, like exporting a 4K video? Does the performance decrease?

I know that under high or low temperatures the iPhone will shut itself off. But does it also throttle itself before reaching that point?

Ars Technica has run some extensive tests on iPad Air and iPhone 5s finding that:

This is likely due to the greater thermal capacity of the iPad Air, given the same CPU. 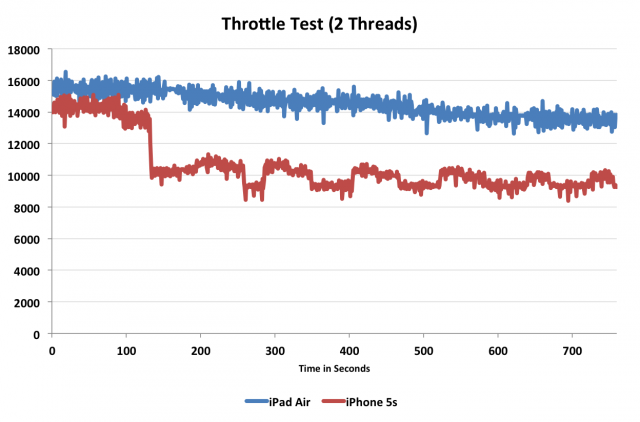 Similar tests on iPhone 6 and iPhone 6+ demonstrate that the A8 greatly improves on the A7 with respect to maintaining its rated clock speed, while also throttling less aggressively than the A7.

It’s still nothing like the straight line Phil Schiller highlighted during the big reveal, however: 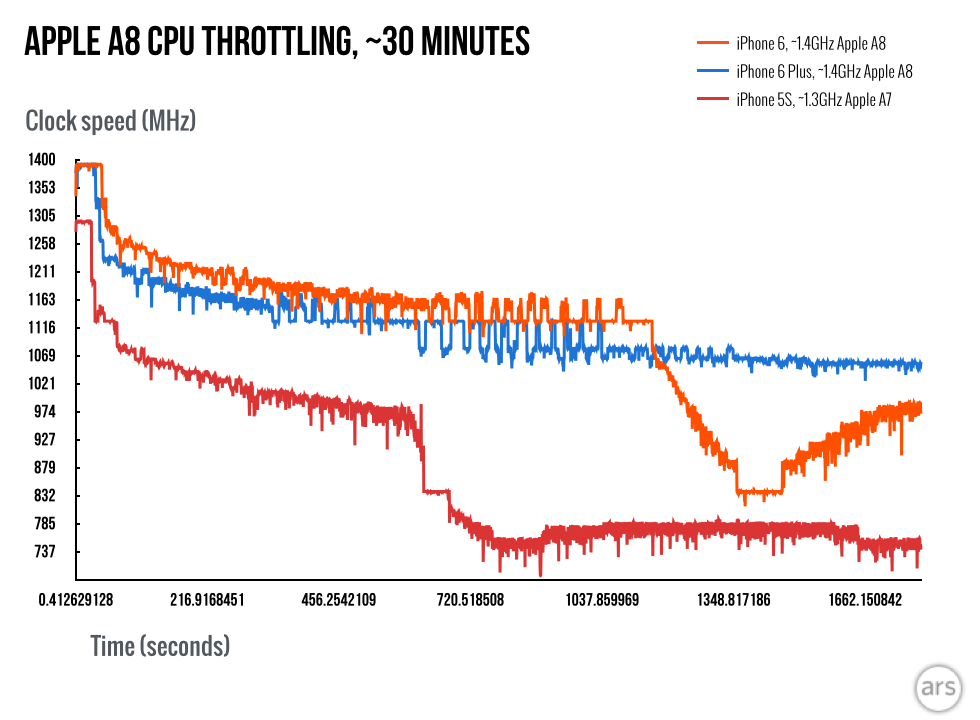 Tests on the iPhone 6s and iPhone 6s+ reveal that the A9 improves even further upon the A8: 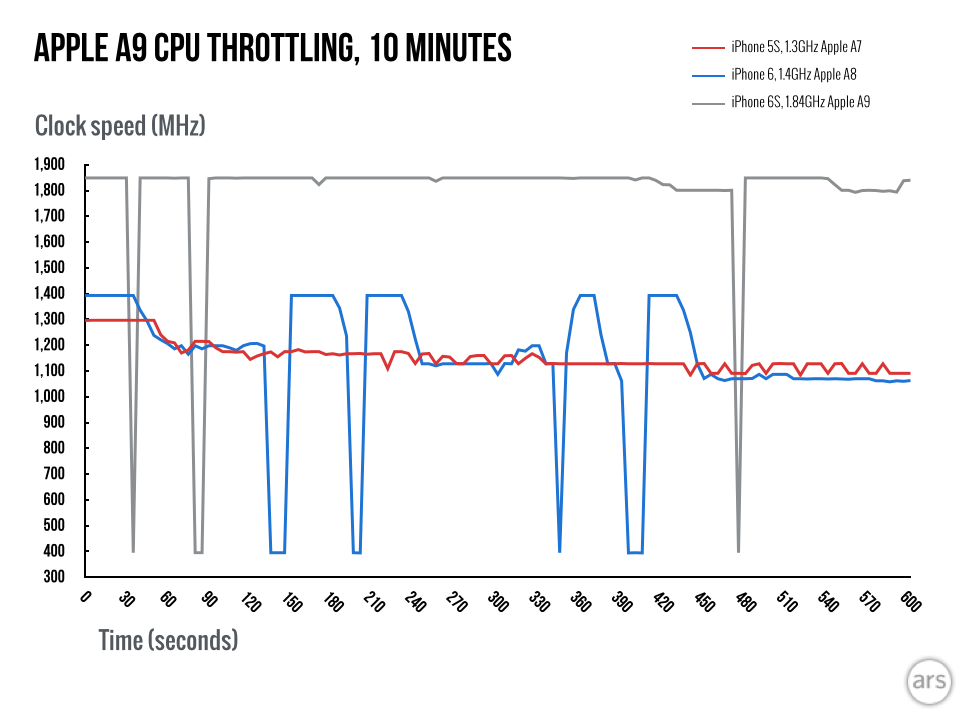 Generally, the iPhone+ model throttles later than the standard model due to the larger heat dissipation surface: 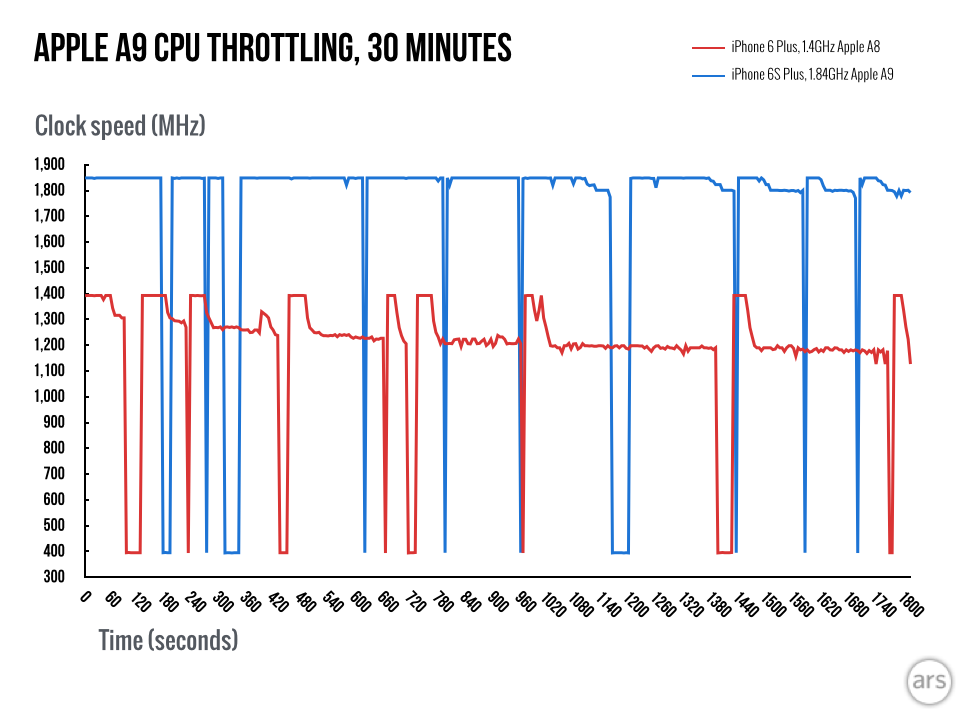 Sadly they didn’t run similar tests on the A10 Fusion, but it stands to reason that they would follow the same trend, especially thanks to the small cores allowing the big ones to idle more frequently. This of course would not be reflected in intensive tests, but would have an impact in daily use. Since they get more idling time, the big cores also get more opportunity to cool down, and therefore run at peak performance whenever called upon.

The Nexus 4 couldn't even make it through our entire benchmark suite (though it's worth noting that later hardware revisions improved this somewhat—a Rev 1.1 Nexus 4 purchased in May throttled less and ran cooler than our Rev 1.0 Nexus 4 from last November). 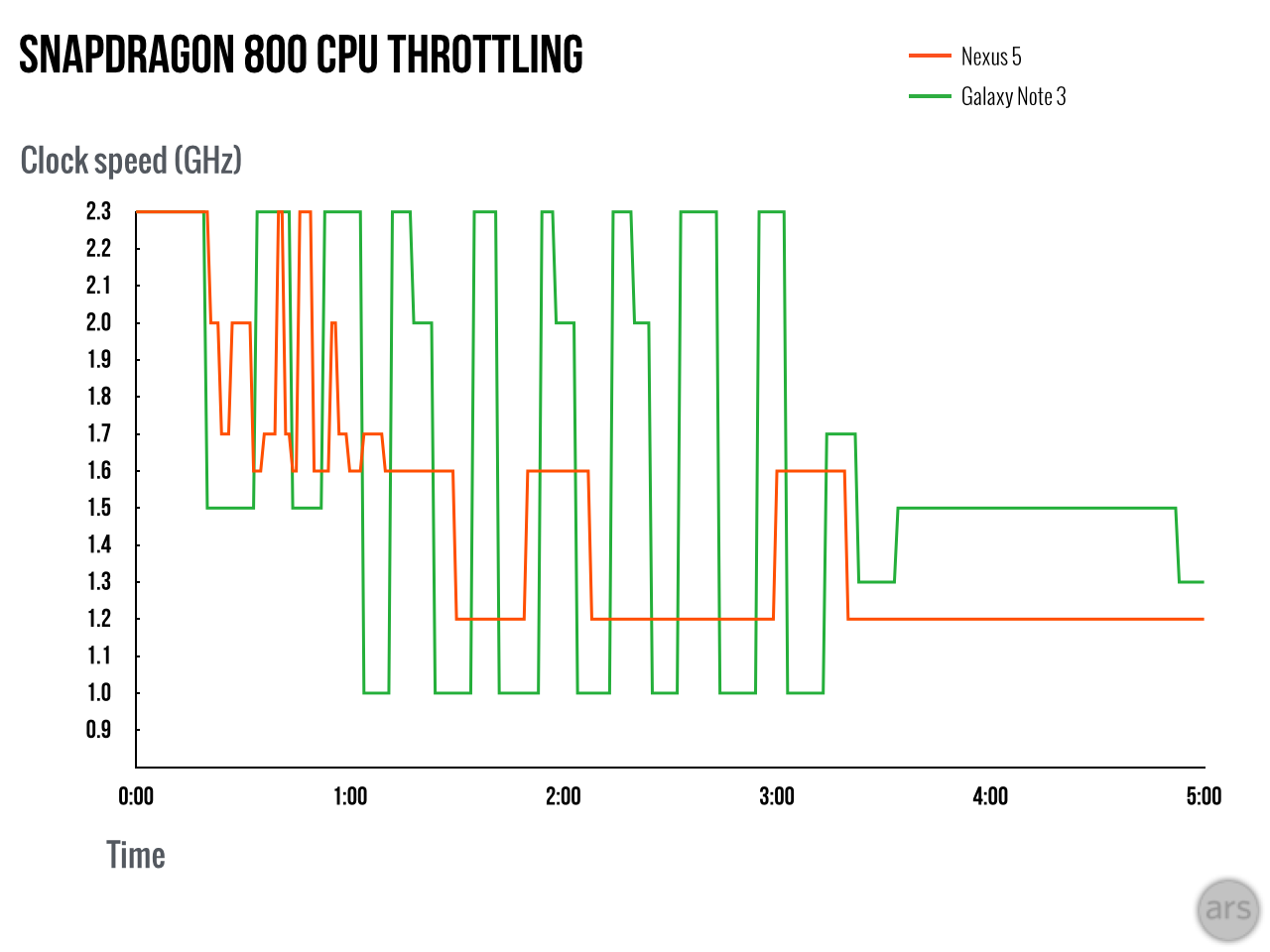 Not only that, Qualcomm’s chips have been shown to jump down to the LITTLE cores when throttling, which degrades performance even further:

When it throttles, it will occasionally switch from the “big” ARM Cortex A57 cores to the “little” ARM Cortex A53 cores. Even though the little cores could generally run at higher clock speeds than the big cores while the test was running, they can process fewer instructions per clock, making them slower overall.

The 810 throttles so quickly that the 805 and even the 801 can beat the 810 when performing sustained workloads.

Not the answer you're looking for? Browse other questions tagged iphone ios performance benchmark .

6
High processor/CPU load on iPhone, draining battery, how to fix?
5
How can I put heavy load on my CPU for a long period of time?
0
How do I manually throttle the CPU usage of an app?
1
How can I simulate light to heavy disk access and light to heavy CPU usage?
8
Does the iPhone 6 “CPU-throttling” feature stop after the battery is replaced?
2
At what level of battery health does iOS begin to throttle performance?
1
Why does a MacBook throttle without a battery?
2
Ensuring consistency and minimal interference during benchmarking?