I installed PC Ram into my Early 2011 15 inch Macbook Pro (Ver. Sierra 10.12.4). It works great but occasionally restarts without any warning and sometimes, when I turn it on, this code appears. It is gone if I do a hard shut down and then start it again. I did a hardware test (pressed 'D' on restart) and that hardware test said there were no issues. Thoughts???

Image of error message is attached. 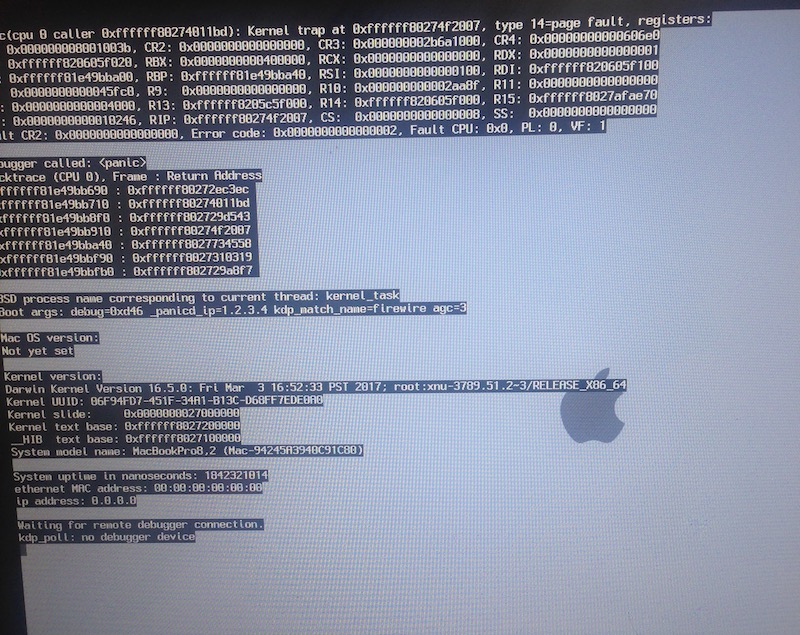 If the problem started occurring after installing the RAM, it is most probably caused by the RAM. Issues with RAM can be "spotty", meaning that it doesn't necessarily fail all the time - but just randomly or when the system is hot or similar. Therefore the RAM might be flawed even though the system passes the hardware test.

The error message in the screen shot shows a page fault within the kernel. This is typically caused by either a bug in the kernel, or a hardware error - usually faulty RAM or bus/CPU errors, but the latter is less likely.

As this happens during boot-up and a laptop is usually comprised of only expected hardware components - it is likely to be a hardware error.

If you have any external devices plugged into the laptop, for example Thunderbolt or USB devices - try unplugging to see if that solves the problem. Then the cause could be a buggy kernel extension.

You can try downgrading to an earlier version of macOS if you're certain it is not a hardware error. If it is a kernel bug, the bug might not exist in earlier versions of macOS.

Not the answer you're looking for? Browse other questions tagged macbook-pro sierra memory kernel .

20
My Mac is getting really slow, what should I do?