How do I write a script that opens an iTerm2 window and runs a command?

I'm using iTerm2 Build 3.0.15 and writing a script that opens a new window and prints "hello world" to the screen. Really, I'm interested in being to run any command but using echo "hello world" as a starting point.

I read up on the iTerm2 documentation for scripting. I wanted to learn more so I dragged the iTerm2 icon on the Script Editor icon to view the dictionary available to me and found the following command:

From reading the dictionary and documentation I wrote the following script:

When I run my script from the terminal a new window opened and "hello world" was on the screen; however, I got the following broken pipe error: 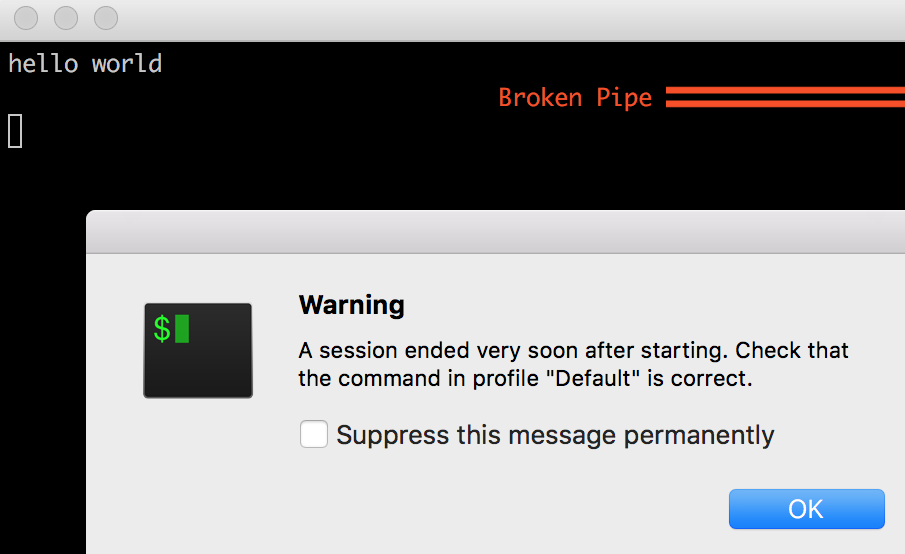 When I select Ok the window closed and I'm left with the following message:

The write command, when not using without newline, executes the write text command because of the default added newline after the "text to send". Thus the window stays open after the command completes, ready for additional use.

From the iTerm AppleScript Dictionary:

write v : Send text as though it was typed.

write specifier : The session to send to
[contents of file file] : Filename to send the contents of
[text text] : Text to send
[newline boolean] : If newline should be added to end of text (default: yes)

The use of read makes bash wait for the user to end the line (i.e. by pressing enter) before exiting. Pressing enter within 3 seconds will still yield the warning, as this is an iTerm feature which you can disable by checking the box on the alert, and control more precisely in Preferences → Advanced → Warn about short-lived sessions.

Not the answer you're looking for? Browse other questions tagged terminal applescript script iterm .

34
For iTerm2, how do I make the working directory appear in the window title?
2
Can I control window size and position when opening files via script?
4
How to open a shell script in a new Terminal window and run it with administrator privileges
2
How to get the window id with title of every process?
0
Why isn't my system producing an audible system beep in iTerm2 or Terminal?
1
Applescript to set terminal window to specific size
0
How to iterate items of the window with dynamic title
0
Can't Rename Images Sequentially Via Applescript Because Other Images Already Have That Name
0
How to create a hotkey for opening a new iTerm2 window?