How does macOS Sierra securely pair with Bluetooth keyboards without a code?

I have a late 2014 Mac Mini running macOS Sierra 10.12.5. When I paired it with my Bluetooth keyboard, I was not prompted to enter a sequence of numbers.

How does macOS validate and secure connections between Bluetooth keyboards without prompting for a code? Does it just use trust-on-first use? Is it possible to force macOS to use a pairing code?

How does macOS validate and secure connections between Bluetooth keyboards without prompting for a code?

It's not just macOS - your keyboard is connected and encrypted at the firmware level - if it wasn't you wouldn't be able to perform an NVRAM reset before the OS loads.

However, you don't need a code because modern Bluetooth keyboards use an authentication algorithm to pair and a generated authentication key based on public keys to secure the data transmissions.

Does it just use trust-on-first use?

No. It verifies its identity using an algorithm and 128-bit generated keys.

Is it possible to force macOS to use a pairing code?

Why? This would be going back to pre-2009 pairing methodologies. This would be the equivalent of enabling WEP shared keys on modern WiFi networks.

The process you described for pairing a Bluetooth device (a keyboard in your example) uses an old (Bluetooth 2.1) method of authentication called Simple Secure Pairing (SSP).

The most important thing to note is that SSP is NOT the encryption key; it's merely the pairing mechanism to identify each other. Encryption is handled through a public key. The code you enter is to make sure that's the device you want to connect to; it's not the security.

Since Bluetooth 3.0 (April 2009), Bluetooth devices uses an AMP key for authentication which automates the above process.

The Bluetooth device authentication procedure is in the form of a challenge–response scheme. Each device interacting in an authentication procedure to as either the claimant or the verifier. The claimant is the device attempting to prove its identity, and the verifier is the device validating the identity of the claimant. The challenge–response protocol validates devices by verifying the knowledge of a secret key — the Bluetooth link key. 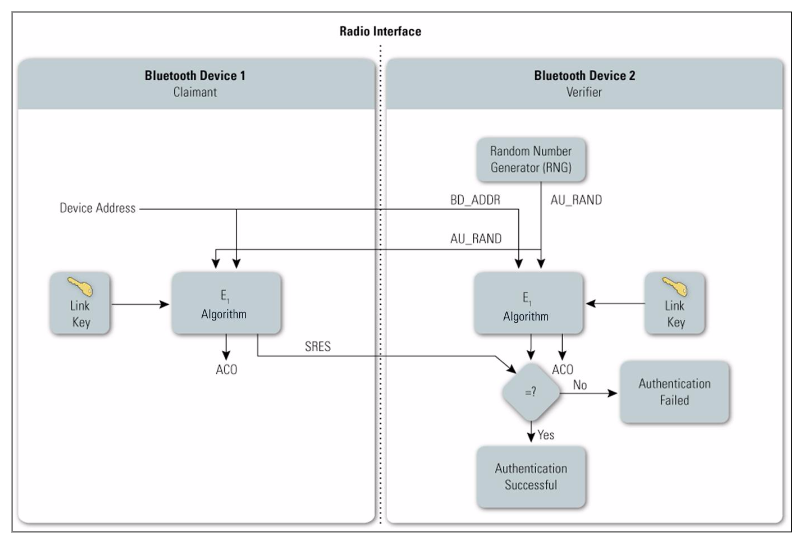 There are 4 modes of encryption

Bluetooth keyboards using Bluetooth 2.1 (keyboards from 2009 and beyond) and up encrypt all their traffic.

Not the answer you're looking for? Browse other questions tagged keyboard macos security bluetooth .

9
How safe is it to use Apple's wireless keyboard?
2
How an I confirm my Bluetooth 3.0 Keyboard is encrypted?
1
Can you make Bluetooth hardware work out-of-the-box in Boot Camp?