How do I install macOS Sierra now after all these issues?

I upgraded my iMac from El Capitan to Sierra about 6 weeks ago and all was working well. A few days back I decided I wanted to reinstall macOS Sierra so that I had a clean installation that wasn't upgraded from El Capitan, but was 'fresh' with no old files etc.

Then I had an issue with kernel panics upon startup after reinstalling Sierra, so I posted this question: Finally reinstalled macOS Sierra, but now I get a kernel panic and William T Froggard and Monomeeth helped me get past that.

Then I got this error message:

Note that is a reflection in the photo, not a GPU problem.

So I followed the advice and tested my hardware. I selected the extended test and over an hour later the test found no issues. But when I restart and try again, it keeps bring me back to the above error.

I do not believe I have a hardware issue as there were no signs of problems before I decided to reinstall macOS Sierra. As I mention in my first question, I decided to reformat the HD by doing a 2 pass secure erase and this was successful. So I think that means I have no problems with my HD right? Plus the 1hr hardware test passed also.

Note that I have already tried booting into the recovery from the recovery partition, and from the internet. I have tried both these options many times. None seem to work. If I hold down alt/option during startup I see a macOS Installer option and a Recovery option: 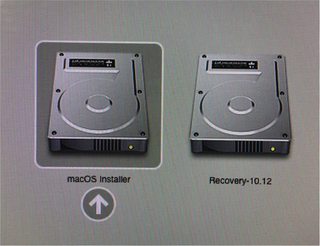 I have tried both more than once and always get stuck in some sort of loop.

Obviously I wish I never decided to reinstall macOS Sierra, but now that I have, what do I do from here to get it back on this computer?

I've been looking over your other questions and the whole history of your situation and feel like we're missing something here. Not blaming you, I just think something unbeknown has happened (e.g. a power failure at some point you're not aware of that has caused some corruption).

So, I'm suggesting you do as follows:

Let me know if you run into any problems, but hopefully this will resolve the issue once and for all as it eliminates a number of possible problems.

The most likely culprit is that your hard drive has failed or is in the process of failing.

You've provided lots of good info so let's see if we can digest it all...

The iMac in question is a mid-2011 27" model. I just tested it by putting a 2012 MBP in target disk mode and booting it from that. It booted fine and seems to run fine.

This means that your iMac is more than capable of running Sierra and the only component you've isolated that has eliminated your problem is your hard drive.

As I mention in my first question, I decided to reformat the HD by doing a 2 pass secure erase and this was successful. So I think that means I have no problems with my HD right? Plus the 1hr hardware test passed also.

Not necessarily. A two pass erase simply writes data to the drive. The trick here is to do a verification after the write (read the data back). I have seen many instances where a drive was failing but failed (pun not intended) to report that it was failing.

Many people like to "stress test" their drives in the hope that it somehow fixes things. This is roughly what you did and it ultimately doesn't make anything better.

Again, here we are bypassing the installer by getting it on the USB and not the installer located on the hard drive. You have effectively isolated your HDD (again) and eliminated the problem (to a point).

vfs_mountroot is what mounts your root file system that's located on your hard drive. At the risk of oversimplifying things, your kernel has loaded, but when it tries to load the rest of the OS, things break. This is the "panic" because without it, you can't do anything so it's (figuratively) throwing it's hands up the in the air "panicking."

Further down (from the same post) we have this little gem:

This is telling us that the kernel that got loaded was the install media but that's as far as it got. Since it couldn't mount the root file system, it stopped here. It couldn't read the drive, so it couldn't go any further.

Get a new drive; go for an SSD (I use Samsung EVO 850 in my iMac and swear by it). Your 2011 iMac has it's screen held in with magnets and Torx screws (as opposed to the 2012 and up which uses glue). Ifixit.com has an excellent tutorial on doing this drive replacement It's rated as "moderate" mostly because the screen is large and unwieldy. But, if you take your time, you can do this with no problems

18
Stuck in endless macOS Sierra installation loop
10
Finally reinstalled macOS Sierra, but now I get a kernel panic
1
El-capitan crashing while booting
2
Installing an older version of macOS onto an external drive
1
fsck_hfs keeps returning "The volume was modified"