This bug cannot be witnessed while running the code from within Script Editor.app, because, in Script Editor, a progress dialog will not appear. Instead, a pie-shaped progress meter is integrated into the bottom of the script window.

How to reproduce the bug:

Save the following AppleScript code as an .app file:

(The file must be an .app file, as .scpt files cannot display progress dialogs.)

Upon launching the application, you will see the following: 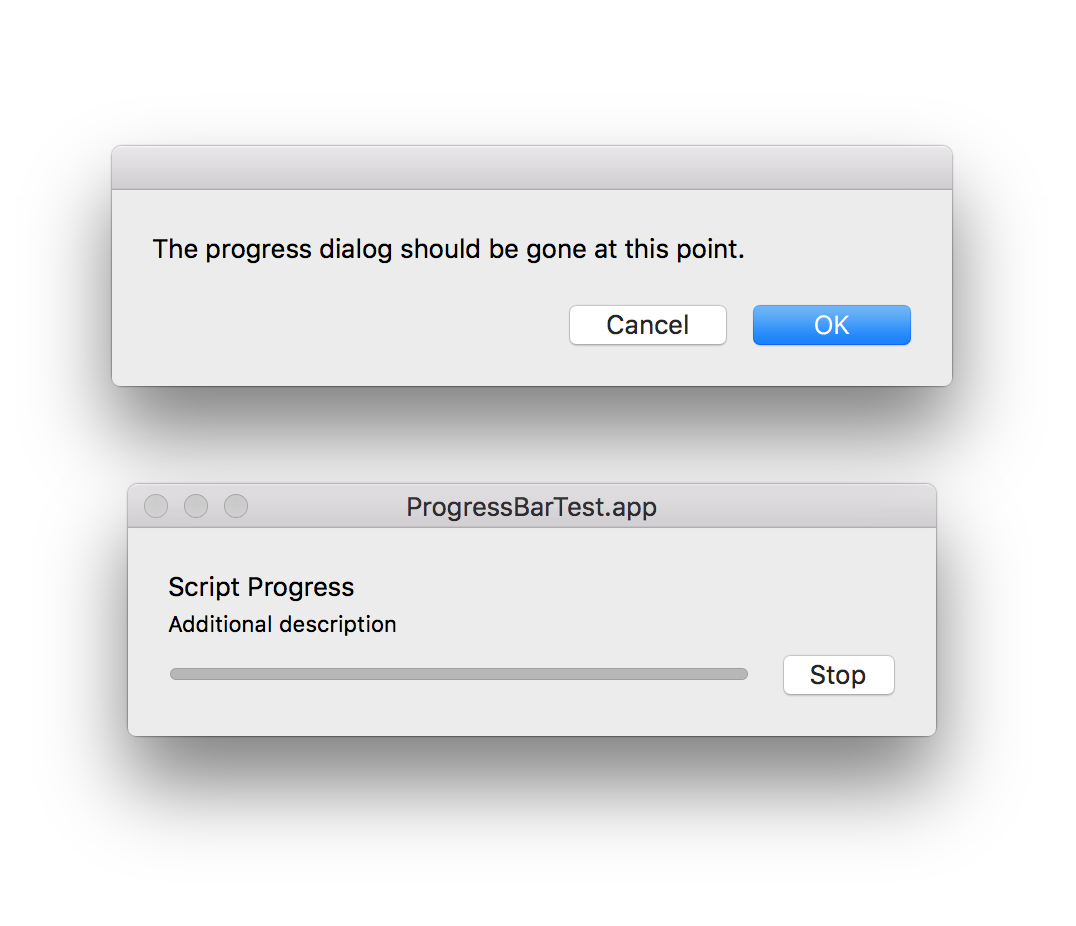 I tried approaching the problem by interpreting the progress dialog simply as a "window" of the app.

If you run the following code in a separate AppleScript file, while both dialogs of ProgressBarTest.app are on screen (as in the above screenshot):

you will learn that ProgressBarTest.app has 2 open "windows". The titles of these windows are:

I then attempted to close this progress dialog "window" by using AppleScript (like one may do for any standard application window). But, the following code:

will give the user an error. The text of this error dialog is:

I tried the following code:

In the above code, button 1 refers to the Stop button that is found in the progress dialog. (You can alternatively use button -4 or button 0 to refer to this same button.)

The good news is that this code successfully closed out of the progress dialog!

The root of the issue is that the progress dialog contains no red "x"; the left-most circular button in the top bar of this dialog is always grayed-out. In other words, there is no way to close the progress dialog manually, without also prematurely ending the script.

So, this problem is more difficult to solve than I thought.

It appears that my desired outcome is impossible to achieve.

Works for me on latest version of macOS Big Sur

Working on one of my own projects, I had one of those "EUREKA!" moments. Here is a completely different approach than my code in SOLUTION 1. The approach here was to wrap most of my code in script objects or handlers, then call those objects as needed. In this solution, I saved this script as a stay open application, with explicit run and idle handlers. Some of the code runs when the application is launched, but most of the commands actually happen within the idle handler.

I think this solution has more promise than SOLUTION 1.

Not the answer you're looking for? Browse other questions tagged macos applescript bug dialog .