When using a third-party script library, I can no longer save an AppleScript file in Script Editor.app

I have an AppleScript .scpt file that uses the Dialog Toolkit scripting library:

The following line is at the top of the .scpt file:

The Dialog Toolkit file is in the correct location:

However, when I try to save my .scpt file in Script Editor.app, I am given the following message:

The document “Untitled.scpt” could not be saved. C and Objective-C pointers cannot be saved in scripts.

Compiling the script will reset property values and may resolve this issue.

I don't know the meaning of "C and Objective-C pointers", so I don't understand the problem.

If I copy the full code and paste it into a New Document in Script Editor, the error still persists.

If I remove all of the Dialog Toolkit code from my script, then I can save the .scpt file, without error. Hence, it seems that the issue has something to do with how Script Editor handles an external script library.

Also, I have noticed general "bugginess" when working on my script that contains Dialog Toolkit code in Script Editor.

There is some chance that this question is related to a previous question of mine:

Everything that is listed in the "What I've tried:" section of the above question also failed to fix the The document could not be saved. error.

First thing I would try is opening up the scripteditor.app library panel. In Scripteditor go to menu item "Window/Library"

If dialog toolkit is present in the list, I would select it in the list and remove it. Then I would quit scripteditor.app and relaunch it again. Once scripteditor.app is up and running again, Open the Library panel and click on the “Add” button in the menu bar and navigate to ~/Library/Script Libraries and select Dialog Toolkit.scptd.

That will probably solve your problem. I have a funny feeling the problem is occurring because your new com.apple.ScriptEditor2.plist file probably does not contain any reference to the Dialog Toolkit.scptd as per this example in this image..

This is com.apple.ScriptEditor2.plist file opened in xcode 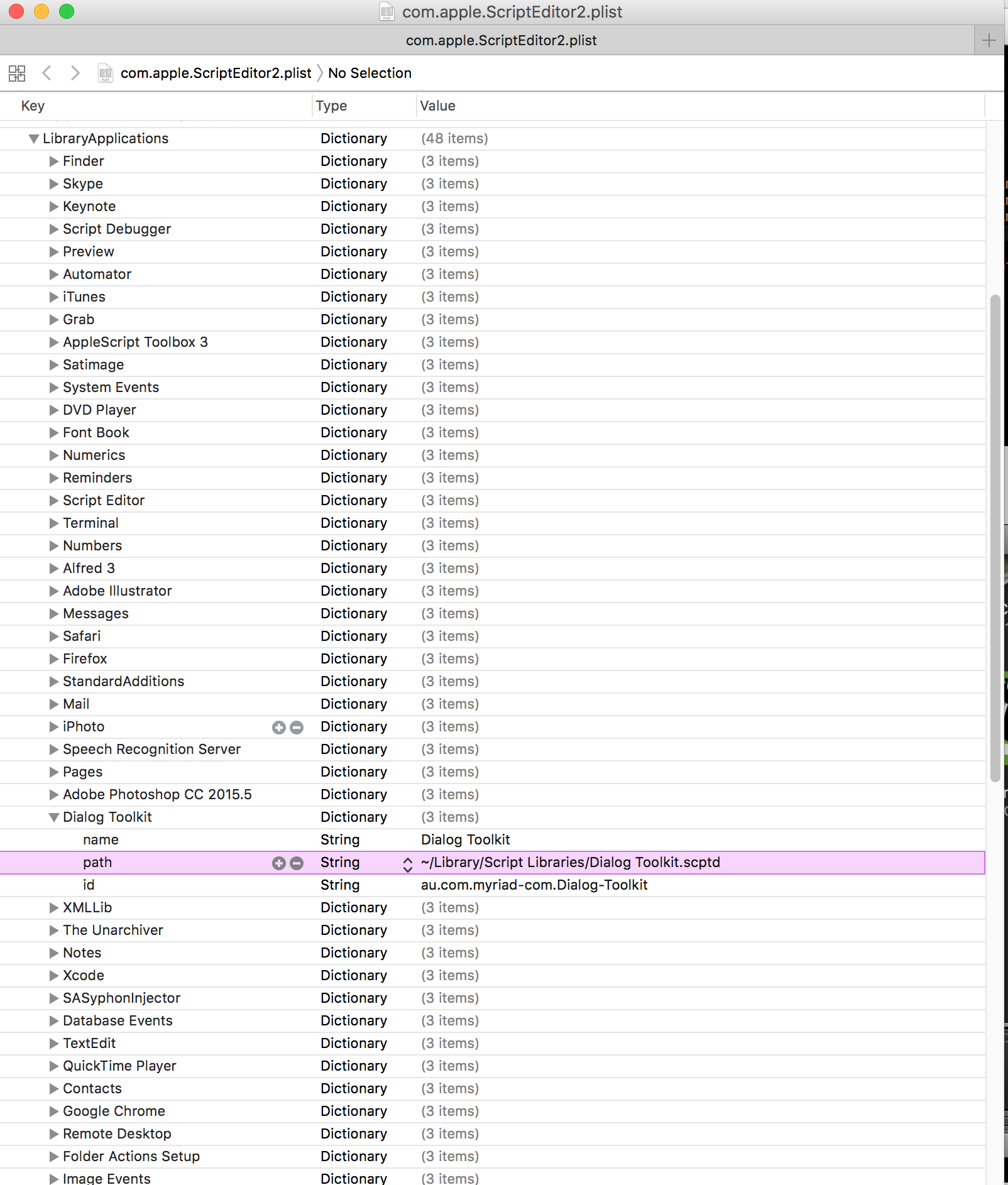 Not the answer you're looking for? Browse other questions tagged macos applescript error third-party .

3
Is it possible for an AppleScript .scpt file to retain a custom icon, even after edits have been made to the code?
1
I suddenly cannot open any files in Script Editor.app

5
Saving applescripts as scripts versus text
8
Why am I getting "Error -1,752" when trying to save in Script Editor?
1
osascript bug: AppleScript's initial "choose from list" dialog is unselected
3
How to prevent Script Editor from scrolling (and losing cursor location) on compile?
0
AppleScript bug when using Myriad Tables Library: "types" is replaced with "type"
1
I suddenly cannot open any files in Script Editor.app
6
AppleScript progress bar bug: How to prevent progress dialog from lingering?
3
Is it possible for an AppleScript .scpt file to retain a custom icon, even after edits have been made to the code?
1
Can an AppleScript create new variables on its own?