I'm looking for a file manager application which helps to organize a large amount of movies, pictures, music, text documents, databases, audio-books and ebooks. Right now I only use the Finder which doesn't work well, because I really need a function to put single files into multiple categories. Simply using the file system for this creates a confusing nesting of files.

Maybe use a file manager that supports Open Meta.

Or use symbolic links for organizing all your media files.

Or even use hardlinked files if you dare.

Depending on the number of categories you require to handle, you could always use a combination of the finder with the built in label functionality, thus a movie can be held in one area (movies directory, for example), but "tagged" as something else. Using smart directories and saved searches you can view your files by a combination of the attributes (location, label, media type) to create custom views. All without purchasing software. Cheap and cheerful, but may be suitable to your needs.

I don't use it myself, but I've heard a lot of good things about Bare Bones Software's Yojimbo

Also, note that iTunes and iPhoto cover a lot of the file types you mention (just not all in the same application).

I use Leap. A meta tag organiser, possibly the best for OS X.

Ironic Software, developer of Leap, was at the forefront of development of OpenMeta. Three owners in the Google Code area:

Mavericks Tagging In The Wild (2013-10-17) described Tom Anderson from Ironic Software as one of the creators of OpenMeta. https://de.wikipedia.org/wiki/OpenMeta describes him as a maintainer.

Pathfinder may be what you are looking for. It's a replacement for the Finder that offers a great deal of "power user" features, such as dual pane browsing, tabs, and a drop stack. I'm not sure if it offers the sorting tools that you desire, but regardless, give Pathfinder a look. 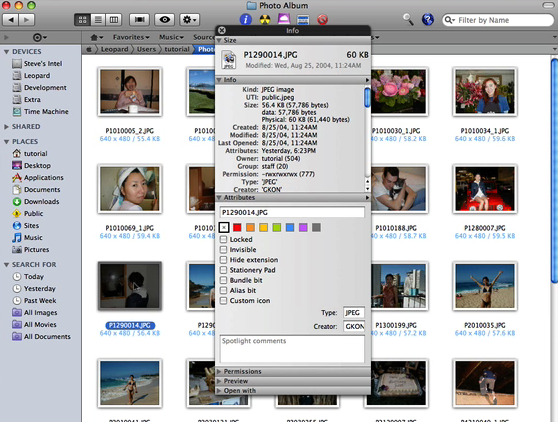 From History and Motivation:

During our search of a diagramming tools that would be more flexible than usual mind-mapping application we found only few that didn’t limit its’ features to mind mapping but brought its’ own idea about diagraming complex issues. One of them was Compendium designed for dialog mapping based on the IBIS notation. Compendium expressiveness allows to diagram complex issues and in a way supersedes traditional mind-mapping by not forcing users into strict hierarchical mapping. On top of it, while based on IBIS notation it can be used more generally and it has some unique features not seen in other similar applications. For many users Compendium was a software of choice for various tasks and from our point of view an application with such unique features set should be further developed and improved.

My own use of Compendium was rare, but enjoyable.

For each file that you drop into Compendium there are two options. Either:

– if you choose the first option, take care to not move the original.

With or without drag-and-drop of files, Compendium has a powerful and flexible approach to management of information. When I last experimented, it was with a view to shared access; there was an option to use MySQL.

Not far from where I worked, someone else on campus made far greater use of Compendium; it was powerful and highly respected. I should expect CompendiumNG to have the same qualities.

a classification scheme used in organizing knowledge into a systematic order. … semantic categories, either general or subject-specific, that are combined to create the full classification entry. Many library classification systems use a combination of a fixed, enumerative taxonomy of concepts with subordinate facets that further refine the topic. …

The subheading personal information management is essentially a single paragraph, a single product –

The HyperSet system formalised faceted classification using set theory, and implemented a prototype retrieval system, many of whose features are implemented in the Tinderbox personal content manager.

– with reference to Don't Link Me In: Set Based Hypermedia for Taxonomic Reasoning (H. Van Dyke Parunak), pages 233-242 of the Proceedings of the third annual ACM conference on Hypertext (HYPERTEXT '91).

a set based hypermedia prototype system designed to support an alternative model for structuring hypermedia information. This alternative model is intersecting sets of nodes and support of taxonomic reasoning. Fundamental entity in HyperSet are sets, each containing zero or more artifacts (analogous to conventional hypermedia nodes). The basic browsing operation in HyperSet is not moving from a node to node but moving from an artifact to a set which is a member and then to another member of that set. Traversing a link with multiple destinations is possible. A user can add or remove a artifact to a set in an analogous procedure of creating a link.

Beyond that 1991 HyperSet system, I expect readers to find other personal information managers that use faceted classification.

Not the answer you're looking for? Browse other questions tagged macos software-recommendation uti .

27
What orthodox file manager for OS X could I use?
77
What file comparison tool can I use under OS X?
1
Looking for a simple file manager for Mac
5
What's expected Time Machine behavior for large folders with few changed files?
2
How can I search 360,000 files, about 280 GB?
3
How can I run "say --output-file" without it hanging (and worse) with more than 310 bytes of input?
1
iPhone 7+ resists 11 methods at having its pictures transferred. What now?