I just switched from TotalTerminal to iTerm2, and the feature I used the most was the visor. When I used my shortcut key (option + `), it'd drop a terminal from the top of the screen that i could tuck away with the visor shortcut again. Alternatively, if I clicked the terminal button in the dock, I could pull down the visor (or if I had other terminals open, I could go to those).

Is there a way I can have iTerm2 not open a new terminal when I click on it in the dock, but to just go to the most recent active terminal (which may be the visor)?

I found it! I'm using Iterm 3 and found the following setting under "Advanced": 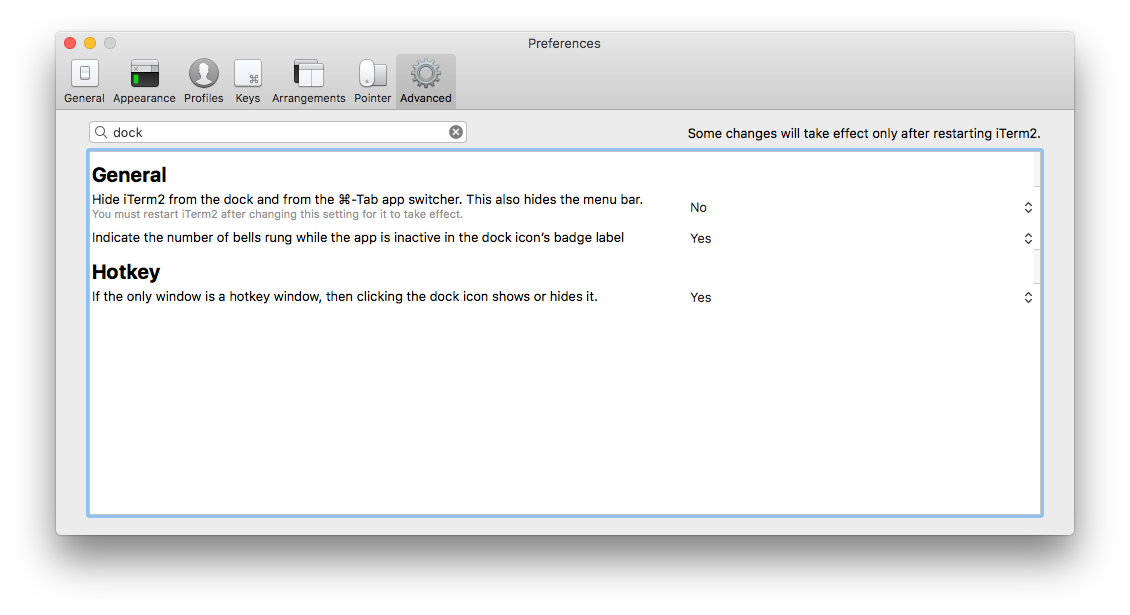 As answered here, you can use a shortcut to hide/display open terminals.

However, I don't think you can "restore" a previous session, since when you close the iTerm2, it ends the current session.

Not the answer you're looking for? Browse other questions tagged dock iterm .

0
Strange Issue with "Recent" Stacks in Mountain Lion
12
App behavior with spaces and minimized window
5
How to customize .inputrc to make Command-Delete and Option-Delete delete lines and words in iTerm 2?
2
OS X Mountain Lion shortcut menu
37
For iTerm2, how do I make the working directory appear in the window title?
13
Remove iterm from cmd+tab apps
3
Hide Parallels's VM icon from the dock
1
What has caused the CTRL + x + e shortcut to stop working in the shell?