How can I copy a PDF from OneDrive to iBooks using the OneDrive iPhone app?

I have a PDF file in OneDrive that I would like to copy to iBooks on my iPhone. Usually apps have an option to copy the PDF to iBooks, but apparently the OneDrive app doesn't. I tried pressing the button on the top right corner after opening the PDF in the OneDrive app and then selecting "Share a link", but it doesn't seem like the iBooks option is available there: 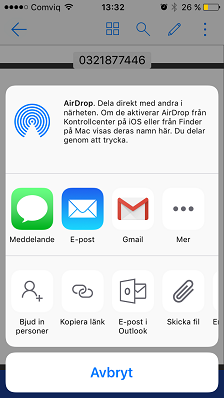 I clicked on More to see if there was an iBooks option that was hidden, but no.

I also tried Open in another app, but nothing happened. The other options in that menu (delete, rename, etc) don't seem to have anything to do with what I want to do.

I also tried opening the PDF online on OneDrive's website with Safari, since Safari usually has an option to copy PDF files to iBooks, but that didn't open it as a PDF file but as a webpage, so copying it to iBooks that way created a screenshot in iBooks and not the actual PDF.

The only solution that I found was sending the PDF to myself by email and copying it to iBooks through the Gmail app, but I would like to know if there is a better way to do.

Is there an easy way to export a PDF from OneDrive to iBooks on an iPhone, preferably directly from the OneDrive app?

Try downloading the PDF, there should be an option called "Open with ..." or "Open in iBooks".

Or after selecting it, click on the 3 dots on the top right, there should be the option "Open in"

If you have IOS 11, you should also have the Files app and your OneDrive account should appear as one of the "positions"
If you select the PDF file there and then use the "share" command, "open in iBooks" will be there.
Dunno why it's not available directly from OneDrive (probably it requires an integration that MS still have to provide)

6
On iPad's iBooks, how to make highlighting show up for PDF files?
8
Can I add or change the author of a PDF file in iBooks?
3
Is there an easy way in Mavericks to share a PDF file directly from Safari into iBooks?
0
How to copy pdf files to be view with iBooks on iPad using iTunes
3
How to open PDF files stored in iBooks on iPad in Adobe Reader
2
Copy Books from Mac to iBooks for iPhone without using iCloud or iCloud Drive
3
How to export downloaded PDFs from iBooks on iOS to a computer?
0
iBooks management of PDF files