Why is the Turkish Government in my computer?

Perusing Keychain Access, I see that "TÜBİTAK UEKAE Kök Sertifika Hizmet Sağlayıcısı - Sürüm 3" is listed as a trusted root certificate authority. Per this 2013 article, I understand that:

my laptop trusts anything signed by “TÜBİTAK UEKAE Kök Sertifika Hizmet Sağlayıcısı”. That’s, apparently, a Turkish government entity. Now, I’ve no particular reason to distrust them, but until a minute ago I had no idea that my computer trusted them. More concerningly, I wouldn’t really know if that certificate came built into [the OS] or just got added last week by a nasty bit of malware… 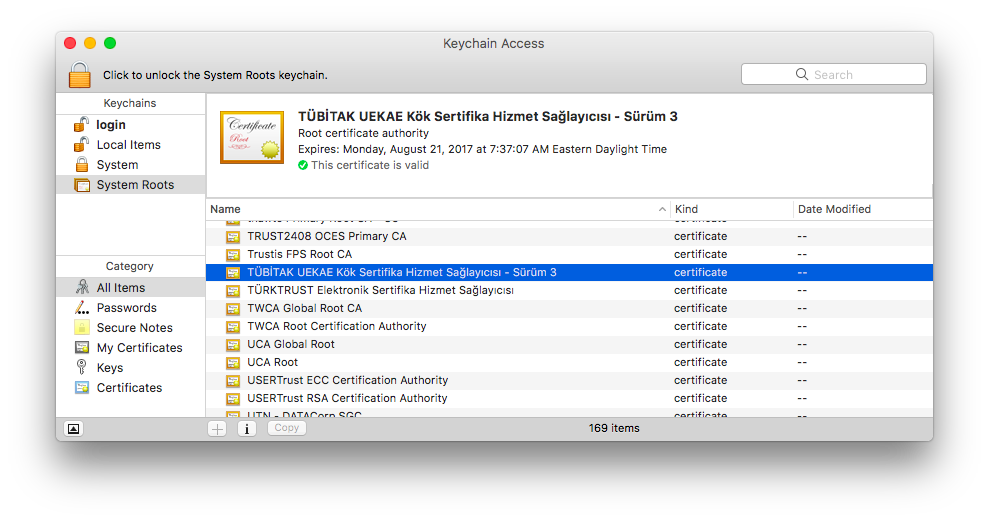 Is this normal? How should I deal with such a thing? 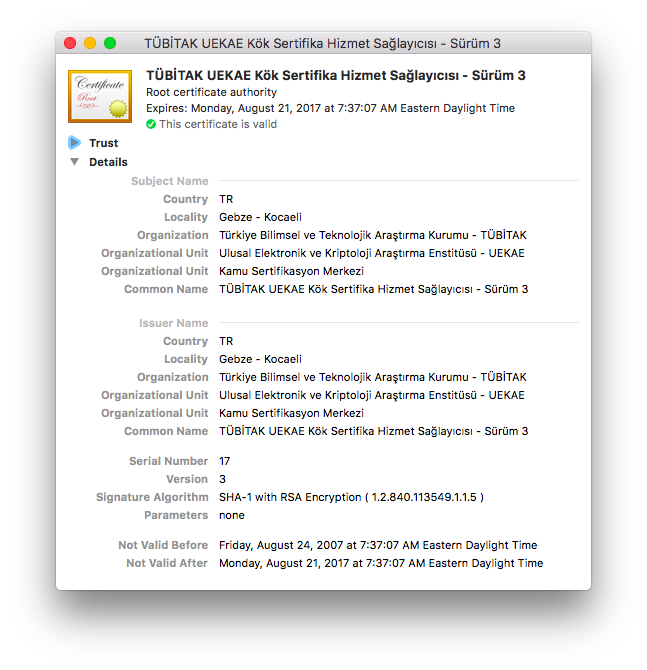 Apologies if this is too broad a question, but what is the Turkish government doing on my computer and should I get rid of the embassy they've installed in my computer?

I am particularly leery, as apparently there is a "Turkish Crime Family" making threats about Apple accounts which they are claiming will happen this April 7, 2017.

Per this list of "trusted root certificates in iOS 9" from Apple it seems this is just one of many of the trusted root authorities around the globe. While this is for iOS and not macOS, which you're asking about, I'd assume Apple would keep parity on these OS's.

If you were to untrust them I'd imagine some part of the internet (however small) may stop validating SSL certs on your machine.

Edit: Here's another list specific to macOS, straight from Apple.

Not the answer you're looking for? Browse other questions tagged security keychain certificate .

15
How do I remove many system roots from Apple System Keychain?
7
Strange looking certificate in macOS Keychain

1
The deleted certificate will be restored after rebooting. But why?
3
Why is the CAcert root certificate not trusted on iOS devices?
4
Where are the root CAs stored on OS X?
8
Why does OS X repeatedly prompt for certificate trust when joining WPA2 Enterprise WiFi
1
Forgot the password of a keychain (non the login one)
42
How to tell why macOS thinks that a certificate is revoked?
3
Work computer shows “This connection is not private” warning on almost all sites
2
Why are these corporate certificates pre-installed and is it safe to delete/“Never Trust” most/all of them?