Why does the larger iPad pro support fewer LTE bands than the smaller one? [closed]

This question does not appear to be about Apple hardware or software within the scope defined in the help center.

Per the official site, the 9.7 inch iPad Pro supports 23 LTE bands for a max theoretical bandwidth of 300Mbps. 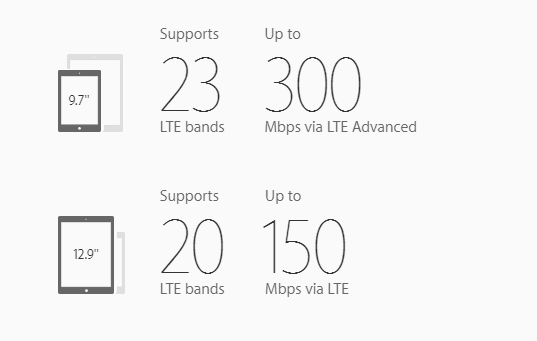 Why is the larger unit restricted in this way?

The larger iPad Pro was released before the smaller one, and presumably before the availability of a newer version of the radio used in the smaller iPad. Only an Apple employee could tell you the details of why the choice was made but I'm guessing this is indicative of a wholesale shift by Apple to use the more advanced radios in future products.

So to answer your question: the larger model wasn't "restricted" - it was released the year before the smaller model and it's likely the part wasn't available when it was being conceptualized and produced.

Not the answer you're looking for? Browse other questions tagged ipad hardware lte .

4
Does the iPad 2 Support the iPad 1 Dock?
3
Will the 4G LTE used in an iPad bought in England also work in Sweden?
2
What's the battery life of the new iPad 4G with LTE disabled/enabled?
4
Why would the "Enable LTE" option be missing in an iPhone 5?
4
Other than size, what's the difference between the iPad Air and the Retina iPad mini?
3
Does the iPad Air support Wi-Fi Direct?
0
Can I change the LTE bands supported by my iPhone 5s
1
Why does my cellular iPad not have the cellular capabilities?
2
Does the 2017 iPad Pro 12.9 have better speakers than the 2015 iPad Pro 12.9
2
Using iPad as a shared drawing board in a Skype meeting