How can I change notification sounds on iOS?

When I get a notification, my phone has the standard "message received" sound for e.g. Twitter.

However, the Tweet sound seems to only apply to outgoing tweets, not received ones. In Notification Center settings, I can turn on "Sound" for each application, but is it possible to change the sound for app notifications globally, or better yet, per-application?

This is one of the bigger changes in iOS 5. Under Settings -> Sounds you can change quite a few tones including Twitter, Mail and Sent Mail. It's not everything but the major one's are covered and a huge improvement from the previous versions.

They've also added a considerable amount of new tones, and you can now assign custom tones to all of them which previously didn't work. 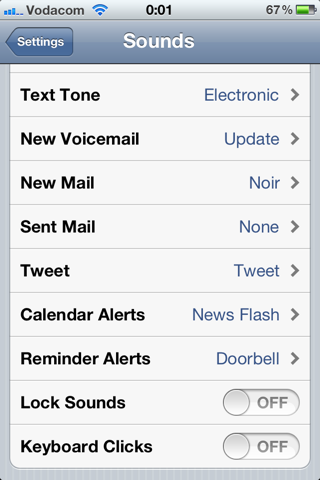 Some applications, for example, What's App, will allow you to change the notification in it's own settings.

The short answer to this therefore is that it depends on the application, some can be globally controlled, and others need to have the ability enabled inside the application.

If you don't like the alert sounds that came with that new app you just downloaded, they're actually pretty easy to change—and you don't even need to jailbreak your phone.
Unfortunately, this only works with non-Apple apps that use their own alert tones. If the app is using a tone that came with the iPhone (like Google Voice's app does), you'll need to be jailbroken to change it. Jailbreaking isn't that hard though. If you don't want to jailbreak, here's how to change an alert tone.

Not the answer you're looking for? Browse other questions tagged iphone ios audio .

2
Can I choose which mail accounts go to Notification Center on iOS 5
0
Why does my iPhone beep with the Messages sound at random intervals?
0
iOS 7 - Twitter notification issue
1
What is an iPhone app with good support for Twitter lists?
8
iPhone vibrates several times a day with no visible notification
0
What app/notification is causing this sound on my MacBook Pro Early 2011
2
What are the various ways I can stop getting iMessage spam notifications on my desktop besides turning off iMessages on my iPhone?
1
Notifications stopped working after iOS 15.5 update - possible bug?