I am trying to resolve an issue for a community hall. The hall has a light projector (BenQ) with small internal speaks, and a Home Theater box with surround sound system (Sony BDV-E290).

All hdmi ports and cables are hdmi 1.4.

Normally, a single HDMI cable connects the light projector to the hdmi (incl ARC - Audio Return Channel) port on the back of the Home Theater unit.

The Home Theater unit has the surround sound speakers connected to it.

One can play a video file put on a usb thumb drive and plugging it into the Home Theater unit. Both video on light projector and sound via surround sound speakers plays.

Connect MacBookPro mid 2012 Retina laptop, so as to play video using internet on this system using the hdmi port. Connect MBP via hdmi cable to a powered hdmi splitter. This is to enable one hdmi cable out of the splitter to go to the light projector, while a second hdmi cable plugged into the hdmi port of the home theater unit so it can play the hdmi delivered digital sound data.

With this set up there is no sound from the home theater unit speakers, only video on the light projector.

The below diagram illustrates this set up.

The question is, should I expect this to work?

Alternatively, am I missing some technical understanding of the hdmi and sound capability of the macbook pro, hdmi port, or hdmi splitter, or concept of hdmi delivered ARC return?

After several hours of research I do not understand what the problem is conceptually, or in practice.

This I think should work. However, I am puzzled and questioning that I should need to do this. Surely such a simple first solution should work. Yet, it does not. 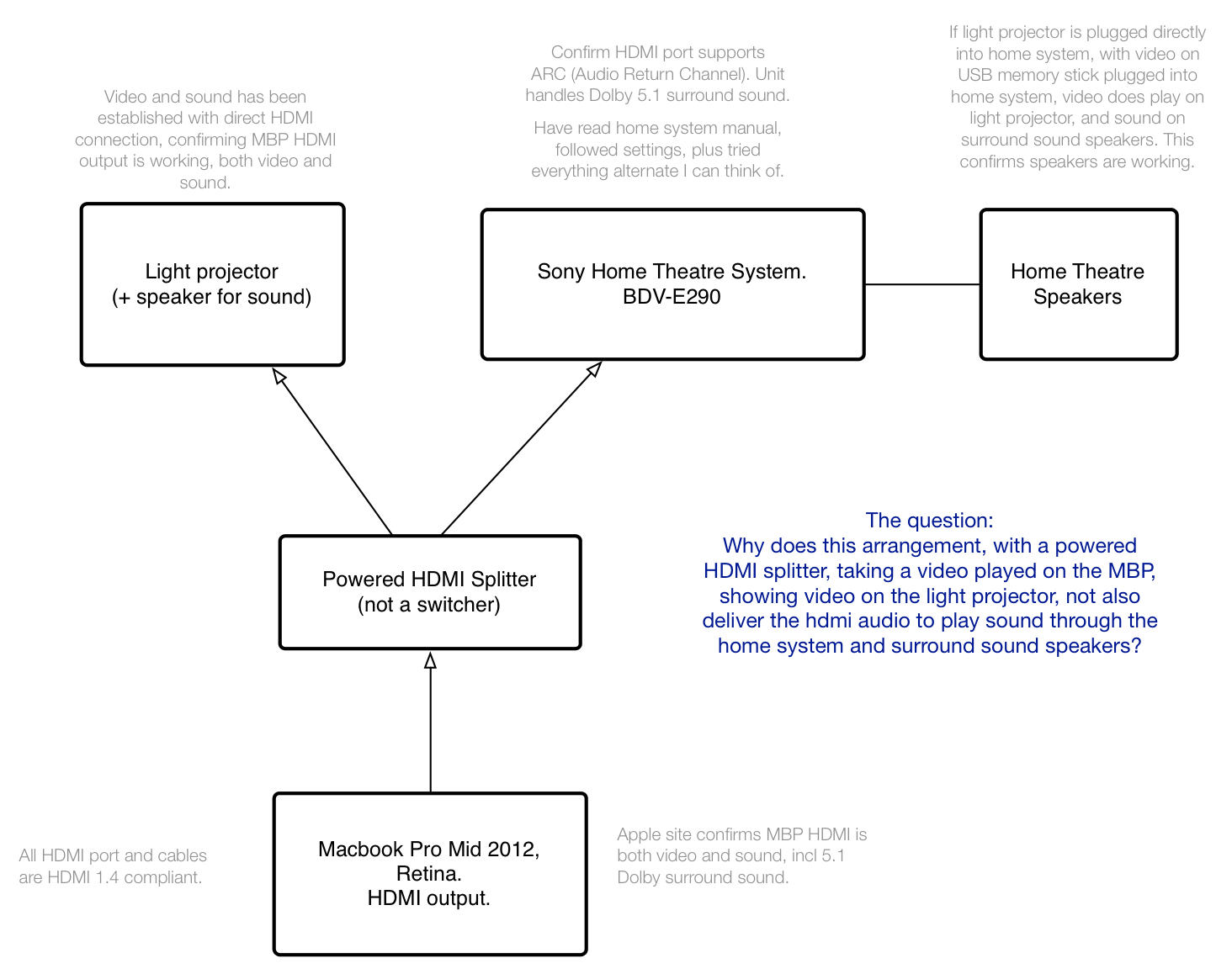 The below solution has now been implemented. It did work.

Can now plug in a laptop, access internet, play video, and have sound play via home theatre system.

This technical information is key to why this set up does not work.

HDMI-ARC uses two pins on the hdmi cable an unused one and the hot detect pin, it is not part of the normal data stream and does not use the normal pins. It's basically a coax spdif connection in reverse.

The confusion has arisen it would appear, when the home theatre box manual mentions ARC return feature associated with the HDMI port in a way suggestive of it being essentially a two way hdmi port.

It would seem ARC does not deliver audio data by the standard way of hdmi video/audio data streaming protocols, or even by the same internal physical pins.

A TV set will return ARC signal, as it is designed to use this different standard for the return audio.

Apparently, ARC is part of the hdmi standard though, as was commented on another site.

ARC is part of the hdmi standard .... it was an addition to HDMI to allow a TV to return audio back to an AVR., to replace a spdif coax or optical cable.

This missing technical understanding re ARC explains why a suggested solution was to add to the hdmi cable from the laptop at the theater box end, an hdmi audio extractor box, with a audio fibre Toslink (for 5.1 surround sound) or RCA for stereo sound, input to those available audio input connections on the back of the home theater unit.

The situation has been confusing. It would seem reasonable to assume the connection functionality of the home theater box would be inclusive of plugging in a laptop device, one accessing the internet for various audio visual media. Hence, when not working, the natural assumption is that there was something wrong with the numerous setting options, which is where I began, or the functional capacity of the hdmi laptop port or laptop settings.

However, it seems not so. The danger of unconscious assumptions!

A second part of the problem is that it the hdmi splitter should be an hdmi switcher, so that the hdmi video data can be selected as coming from the theater box or the laptop.

Diagram of expected solution set up below.

Credit and thanks to the guys on the Whirlpool site, as well as those commenting here. 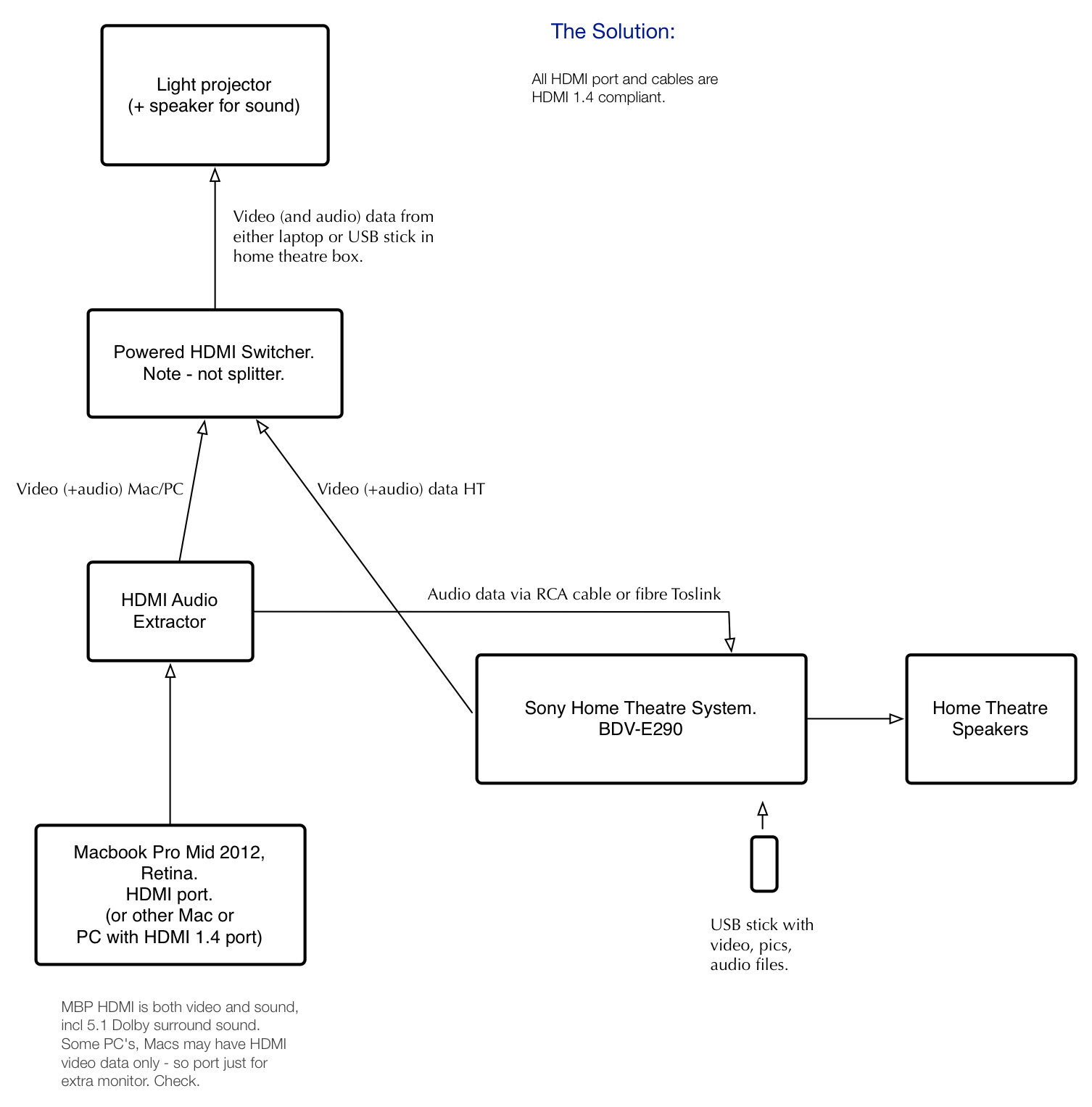 Not the answer you're looking for? Browse other questions tagged macbook-pro audio video hdmi .

2
Using iMac in Home Cinema
0
MBP retina + Dell u3011 via HDMI: intermittent screen message about audio
0
Apple TV to Projector via HDMI-VGA adapter works - optical audio-RCA converter to projector does not
5
External monitor on HDMI but no sound
3
Mac mini 2018 HDMI surround sound output
2
No sound through HDMI with Mac Mini Connected to Projection TV
0
MiniDisplay port to HDMI to optical 5.1 audio only has 2-channel output
3
5.1 audio from MBP USB-C to HDMI