How to completely disable auto-save and versions in Mac OS X Lion?

I hate the automatic saving and versioning in Mac OS X Lion.

Is there a way to completely turn it off?

(This has been asked before here, but the answer and the linked article are completely wrong, so I thought I'd try again.)

I intentionally was searcing for hidden defaults1 and fortuitously stumbled across a defaults setting that disables Auto Save, Versions and Resume, all at once.

If you have a tolerance for potentially breaking things (joke), try the following Terminal command (for Preview in this example):

Replace preview with the name of whatever app you wish to perform this on.

Alternatively, you can configure this globally with this command (but beware that this causes slow logins, so not recommended):

I can confirm that this works for TextEdit, Preview, Automator and Safari (for disabling Resume), but it should also work for other Apple applications like iWork, Xcode, iPhoto etc. It also works for some, but not all, third party applications. My machine hasn't gone up in flames (joking again) but as long as you have a good backup system, these settings seem stable to change and test.

For TextEdit, you must additionally run the following command, in order to avoid sandbox errors:

[This effectively disables the old-style, pre-Lion autosaving completely, so the sandbox won't complain anymore about TextEdit trying to automatically save stuff without your "consent".]

Another option, is a TextEdit fork called "TextEdit+", that thankfully isn't sandboxed (surprisingly, TextEdit is actually open source). It can be downloaded here.

Disabling ApplePersistence also restores Save As in most apps, except in Preview, iWork and maybe some others. In those cases you can use the Export… menu item instead. This is almost identical to Save As, except that you have to manually open the document after saving it. Just assign Command-Shift-S to Export… in these applications, and you'll get something very similar to Save As there too.

1 Thanks to Lri for his excellent one-liner for finding hidden defaults settings.

There is a much much simpler way to do it that was only introduced in OS X 10.8 Mountain Lion.

According to this post, you just have to enable System Preferences > General > Ask to keep changes when closing documents. 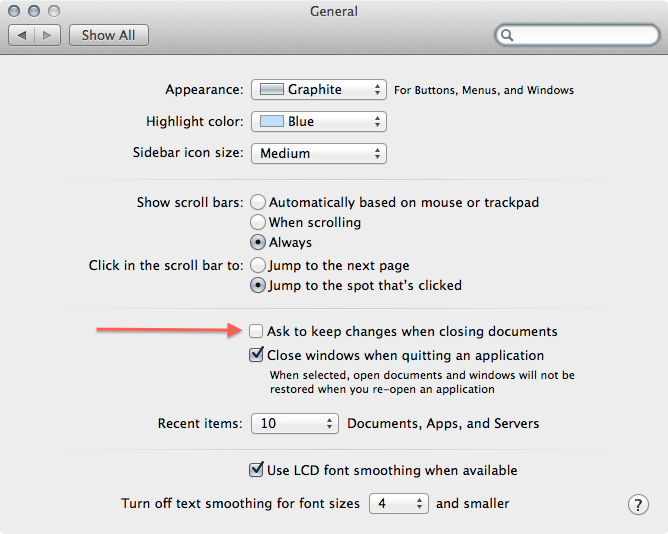 I agree, too many assumptions on Apple's side what users need and especially what can be controlled by the user → hint: new full-screen apps on dual-/multi-monitor setups (fail)

For Versions it's quite similar, no control for the user :(

The only thing I found so far is checking the size of the Versions folder /.DocumentRevisions-V100 and deleting it if I think it takes up too much space.

Note: This is a very bad idea ! It will delete all your previous versions of doucuments/files

You could then prevent the re-creation of that directory by

But that creates a big mess, leaving you unable to re-save documents in Apps featuring "Versions & Autosave"

Not a satisfying solution. I really hope someone finds a way to turn it off or that one of the next OS X updates gives the user more control.

Hackinations: 5 really good Lion tweaks mentions that the switch NSDocumentAutosaveOldDocumentDayThreshold could be used to tweak autosave but I couldn't find any details about its function.

And it seems the deamon /System/Library/PrivateFrameworks/GenerationalStorage.framework/Versions/A/Support/revisiond is responsible for creating the versions - if you rename or move it and restart, "Versions" no longer functions but this is a bad idea again as all processes that depend on that deamon run into serious troubles.

Anyone with better ideas ?

I found a way to disable Versions (not Autosave) in a (hopefully) non-destructive reversible way: (re)move the SQLite database that Versions uses

Careful, this comes with absolutely no warranty and may break your system!

If it worked you'll be notified e.g. in Textedit when you close a document: 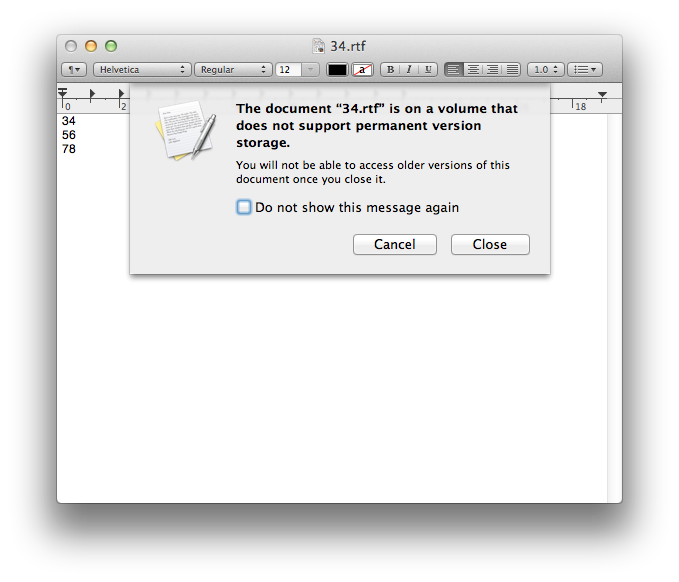 That (probably) means that your document will still be automatically saved in certain intervals, but once you close it (or the program) you can only retrieve the latest version (and Time Machine backups, if available).

Versions (especially of Autosave) may still end up in ~/Library/Containers as nicely described in this answer.

Happily, I didn't have to resort to this. I studied all other safe measures and after trying out some clean disk apps OnyX did the work. It cleared up all the revisions folder without me having to run the scripts above or doing it manually. It freed up 75GB in 10 minutes. I'm using Yosemite still but they offer for other systems as well. And it's free. I had to post the comment to help others, I've been cracking my head in 7 pieces for the last day or so. - https://www.titanium-software.fr/en/index.html

What to do: install OnyX / Close all apps that are running / Open Onyx - it asks to run a disk check, press ok / It will look like it has frozen but it's not / Then select tab Cleaning / Then Select tab Misc. / Then check option: Automatically saved versions of documents / Press enter / Tada!

Not the answer you're looking for? Browse other questions tagged macos versions autosave .

2
Close a file TextEdit without saving
1
Can revisions, auto save and versions be completely and permanently neutered from OS X?
0
Stop macOS from creating/storing previous versions of a document
14
Unsaved Files in OS X Lion
14
Disable autosave in Preview
7
Unchecking "Restore windows when quitting and re-opening apps" doesn't work
3
Is it possible to disable Versions for all applications?
5
Is there a way to turn off autosave feature in Lion OS X?
0
How delete an application that is bundled with macOS?
1
How can I prevent TextEdit from saving previous versions of a text file?
See more linked questions

4
How to use Dropbox for applications with Lion Versions support?
2
Completely Disable Safari Only Mode in Lion
4
How can I permanently disable the Mac keyboard backlight?
2
How does Versions work with iCloud?
0
How to completely disable Ubiquity (iCloud syncing?) in Mavericks or above?
3
Is there a way to turn off flat UI in MacOS Sierra?
1
Dealing with macos Versions feature and file syncing services
1
How to disable auto load of applications on restart/turn on over OS X Catalina?