I followed the instructions here to create the user jira:

but I got two problems:

first the user appears as not an admin member although I have added them as an admin (and I have rebooted, see here)

second I cannot make this user own their directory, ie when I run

I cannot login as that user either:

although the jira user appears on the list of users: 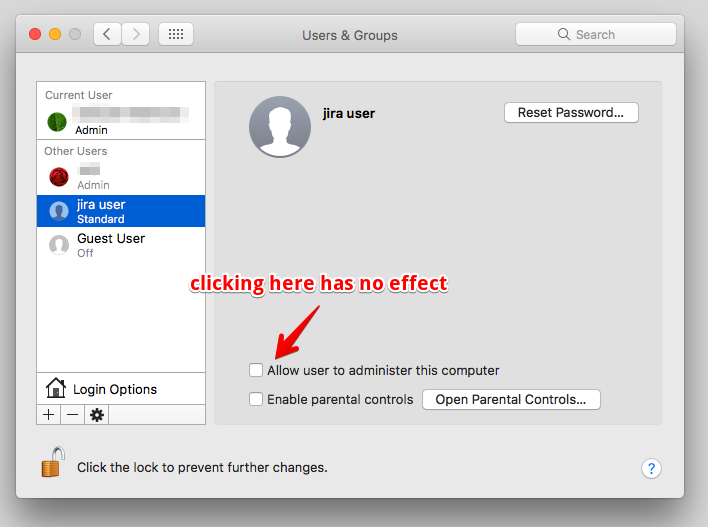 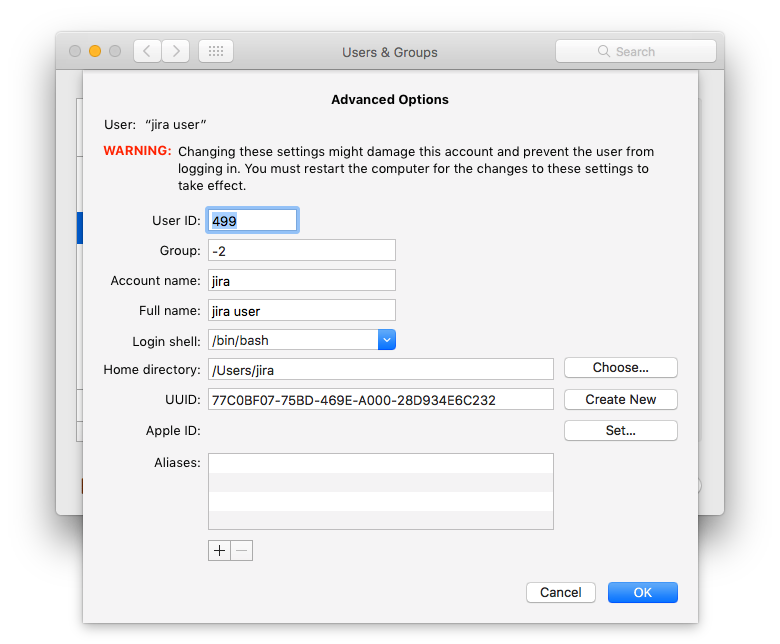 The instructions you're following are rather confused and incomplete; see this ServerFault question for better info. I think the main problem is that you haven't set all of the necessary attributes for the new user (although you've set more than your code fragment suggests!). You're missing:

The problems with your current setup are: the primary group membership of -2 (the "nobody" group), the confusion about whether the home directory is /Users/jira or /var/jira (make sure the NFSHomeDirectory points to the actual location! of the directory!), and that you aren't fully setting the membership in the admin group (appending the user's account name to GroupMembership is only part of it; you should also append their GeneratedUID to GroupMembers, or use dseditgroup and let it handle the details).

EDIT: Kent made a good point that /Users/jira is always the path to the users account in dscl, and might also be the path to the user's home folder in the file system (the NFSHomeDirectory attribute). They're confusingly similar, but don't necessarily have anything to do with each other. In the commands above, I show setting the home folder location to /var/jira instead to hide it. So, to make my example complete, here's how you'd create the home folder:

These commands create the home folder; the NFSHomeDirectory attribute tells the user where to find it when they log in. It's important that they match.

Oh, and if English isn't the user's primary language, there are a bunch of other user templates to choose from.

Not the answer you're looking for? Browse other questions tagged terminal command-line macos user-account .

32
How do I create user accounts from the Terminal in Mac OS X 10.11?
2
How to force a macOS user to change their password when they log in over SSH?

7
How do I remove a user via single user mode in 10.7?
9
Proper group ID (gid) for Lion?
4
Command line utility to create screenshot
27
What steps are needed to create a new user from the command line?
1
LDAP Network Account Logins in Mavericks
3
Characters do not echo in OS X terminal unless I hit the delete key
3
Old Mac OS X, cannot get admin access, boot safe or single-user mode, nor reinstall
9
Creating a GROUP via Users & Groups in command line
0
New user account for installing command line software