Merging old backups with new one fails on Time Capsule

I have my MacBook Pro (running macOS Sierra 10.12.3) connected to an external hard drive and a Time Capsule for Time Machine backups. I recently had to wipe the MacBook Pro and reinstall macOS, apparently because of some SSD-related problems, and I loaded my data back onto it from the external hard drive's backup.

After loading all of the data back onto the MacBook Pro, Time Machine backups were a bit messed up. My now-wiped/restored MacBook Pro was being recognized as a different machine than before it was wiped, so backups weren't merged with my history (it tried to back up my whole Mac from scratch instead of just the few gigabytes of new files). To remedy this, I merged the old backups with my new computer (had my new computer inherit the old backups), as described in this answer with:

This remedied the issue on the hard drive and it proceeded to backup just the 11 GB of new data and associated the new backup with the old ones on the external hard drive, keeping all my history dating back to November.

I did the same inheriting backups thing with the Time Capsule (after mounting its backups of my MacBook Pro onto my laptop) with:

However, unlike on the hard drive, this did not solve the problem and did not merge the old backups with the new.

After inheriting the old backups onto my MacBook Pro, Time Machine begins to backup my Mac onto the Time Capsule and later, when I return to my Mac, shows this popup: 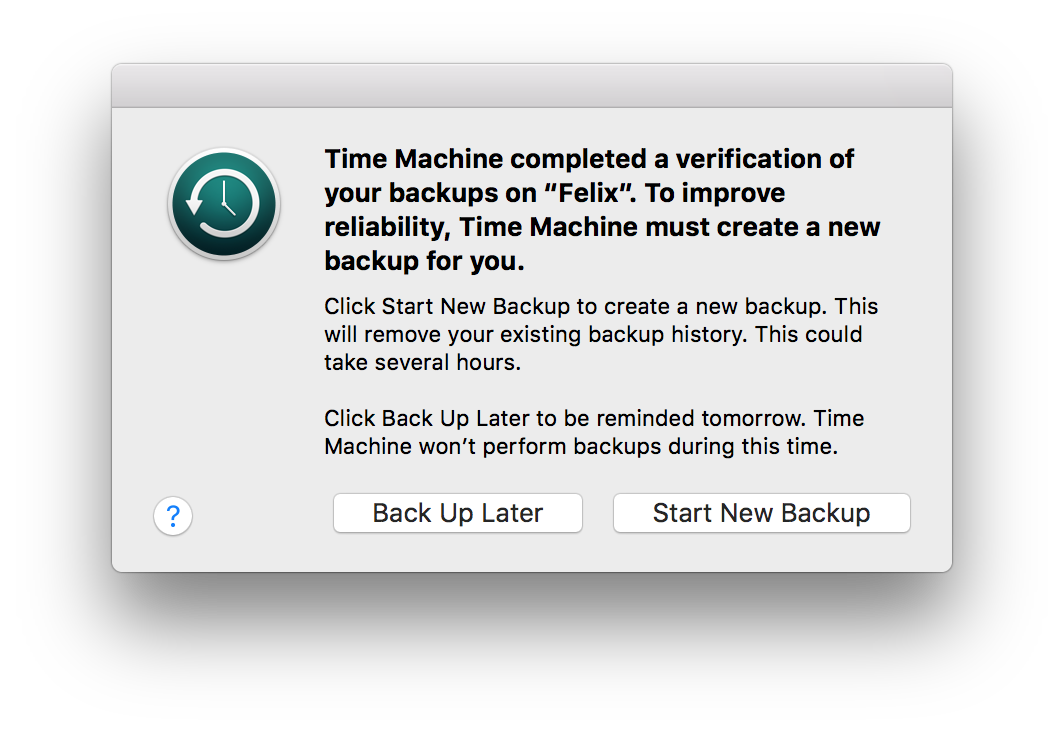 Unfortunately, there's not enough room on the Time Capsule to do another complete backup of my computer without deleting my old backup history (which I need to retain) and so if I click "Start New Backup" the backup fails (runs out of space) or if I click "Back Up Later" my MacBook Pro doesn't backup at all.

How can I circumvent this odd protection to "improve reliability" and just backup my MacBook Pro to the Time Capsule, merging the backup with my new computer and only backing up the same 11 GB of new files that I had to back up to my external hard drive?

tl;dr: How can I perform a Time Machine backup of my post-reinstall Mac to the Time Capsule without making a completely new backup, just like how I did with my wired external hard drive?

Unfortunately, it's impossible to merge two sets of Time Capsule backups, as the Time Capsule itself runs checks to ensure that your backups are in "good condition".

You'll have to press Start New Backup, which deletes all of your old backups but will succeed in making a new one.

Not the answer you're looking for? Browse other questions tagged mac time-machine time-capsule .

35
How can I use an existing Time Machine backup with my new computer?