Mono output from an external DAC

Due to a health issue I have very reduced hearing in my left ear. Because of this I often listen to music in mono instead of stereo. The macOS audio controls (under the accessibility settings) allow me to select that the stereo output be converted into mono, however this doesn’t seem to work with the the DAC I am using the Schiit Fulla 2, which stubbornly continues to output in stereo. It works fine for the built in audio output.

Is there a way to get a mono signal to my external DAC instead of stereo? I mostly need this for iTunes but would prefer it be system wide

EDIT: I know This can be done with apps like Audio Hijack, but I was hoping to do this at the system level and not have to have an app running when I want to switch output to mono.

Also I tried my DAC in iOS and it work with the accessibility settings to switch the output to Mono so it looks like a limitation of macOS at this point.

I'm going to end up sounding like a one-man advertising campaign for this app [I have no affiliation, it's just darned useful]

Rogue Amoeba's Audio Hijack can do this type of routing easily. It unfortunately cannot route 'everything' to any given output in a single move, but you can make it route multiple apps & System audio through the same signal path.

You build by dragging & dropping elements from the right side-bar into the main window. Connections are built as you drag. Then you dial in your specifics by clicking at the bottom of each element & choosing its app, effect or device.
Effects are - some built-in or any AU effect plugins on your Mac.

It is ostensibly an audio recorder, but if you don't put a recorder element in the path, then it will just pass-through instead.

I built this in less than a minute to route system & 2 yet to be decided apps through a channel 'effect' set to mono, then out through my audio USB.

Caveats:
It must be set running to function, so it's not a complete 'set & forget' at system level.
It's expensive for a one-trick pony.
It will auto-launch all apps used in a 'Session' so you might not want to put them all in one setup but make different combinations, as needed. 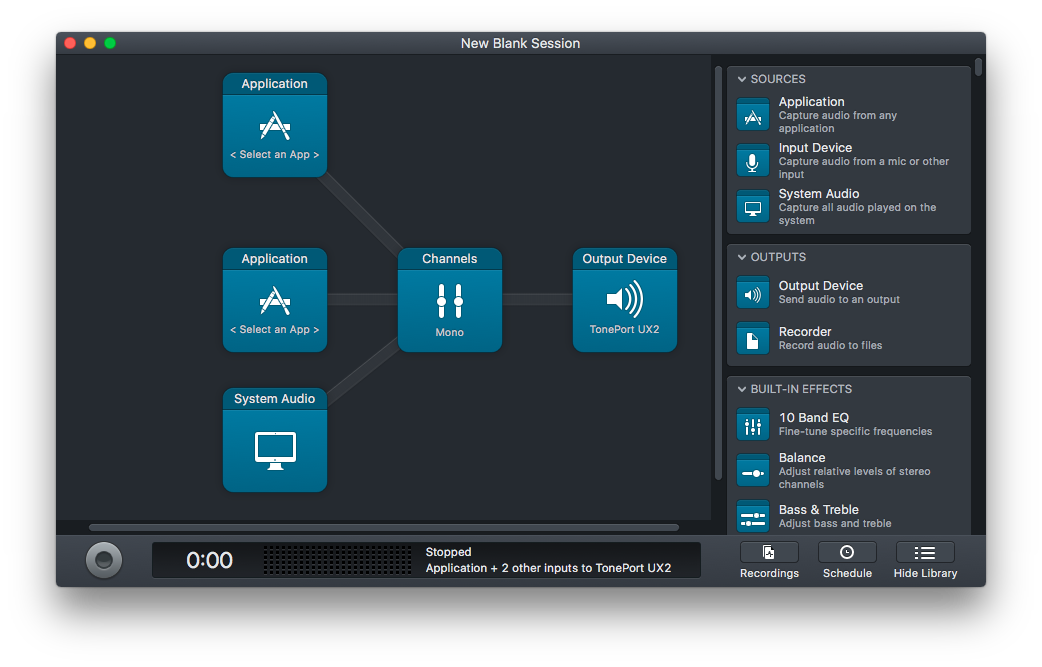 Not the answer you're looking for? Browse other questions tagged itunes audio .

2
Can I direct the audio signal from Apple TV?
9
What are the afconvert settings for the iTunes Plus AAC encoding setting?
3
Mac mini 2018 HDMI surround sound output
1
How to record soundcard audio and output to speakers with the BlackHole driver?
0
MIC ON, Problems with audio on IOS 15